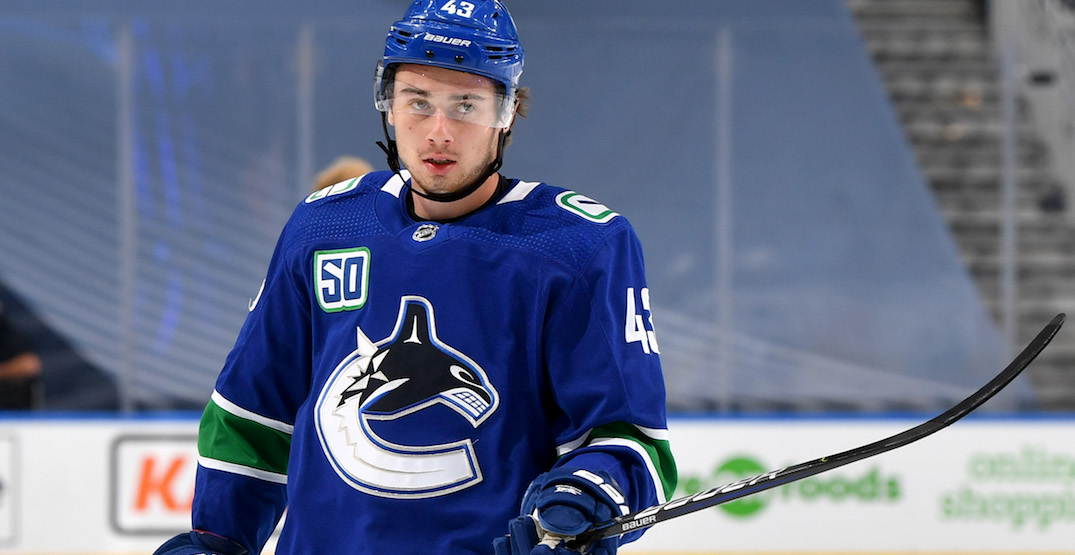 The Canucks made major strides in their rebuild in the 2019-20 season, and the biggest reason for that was the emergence of Quinn Hughes.

The seventh overall pick in the 2018 NHL Draft has just 73 regular season games under his belt, but he has already proven himself to not only be the Canucks’ best defenceman, but also among the best in the entire league.

Of course, the only downside of watching your young prospects become stars in the NHL so quickly, is having to pay them for it.

Both Hughes and fellow Canucks superstar Elias Pettersson are eligible to sign extensions now, with only a year remaining on their entry-level contracts.

Typically, it’s wise for NHL teams to lock up their young stars on long-term deals. One main benefit of that is for the potential to have it become an incredibly team-friendly deal a few years down the road when the salary cap rises and comparable players are signing much more expensive deals.

But in the case of the Canucks and Hughes, it may actually be in the team’s best interest to sign him to a shorter, “bridge” deal.

COVID-19 has truly been an unprecedented time for everyone, and it’s no different in the NHL.

The flat salary cap caused by the financial strain on the league has a significant impact on the decisions teams make, and that was evident throughout free agency. In recent years, free agents would get lucrative deals that quite often provided more harm than good to the team signing them.

That completely changed with the pandemic. Tons of players signed for below market value while teams struggled to navigate a lower-than-expected salary cap. Teams traded players for pennies on the dollar (hello, Nate Schmidt) just to clear money off the books, and some well-established players like Taylor Hall ended up signing one-year deals to perhaps take another crack at free agency next year.

All this is to say that what is typically a smart move in the NHL may not be right now, and the sooner teams grasp that and look to take advantage of their unique situation, the better off they will be.

The combination of the JT Miller trade and the rapid development of Pettersson and Hughes led to the Canucks turning into a playoff team sooner than many would have predicted a few years prior. Unfortunately, the Canucks have a well-documented list of bad contracts on the books, and that is coming back to hurt them now.

While you can argue that the Canucks were wise to avoid signing some of those players, it’s clear that the lack of salary cap space is hurting the team in the short-term.

The salary cap is likely to stay flat for multiple seasons, which gives the Canucks much less room to work with than was expected pre-pandemic. But it also presents them with an opportunity to sign Pettersson or Hughes to a bridge deal without paying too much for it later, since the year-to-year inflation you’d normally see on contracts is essentially paused with the cap.

Of the two, it makes more sense to sign Hughes to a bridge deal because of his status as a 10.2c free agent, which means he is team-controlled as an RFA but does not have arbitration rights and cannot accept an offer sheet. This means that Hughes has very little leverage.

Of course, Hughes will have more leverage than the average 10.2c free agent (like Adam Gaudette) given he has elite talent, and him threatening to sit out games is a legitimate bargaining chip in his favour. Still, his 10.2c status means he won’t have as much leverage as someone like Pettersson will in negotiations.

The benefit of a bridge

For the sake of this exercise, let’s imagine that Pettersson signs a long-term deal worth $10 million per season. That would leave the Canucks with $12.7 million left (according to CapFriendly) to spend for the 2021-22 season, and a roster looking something like this: 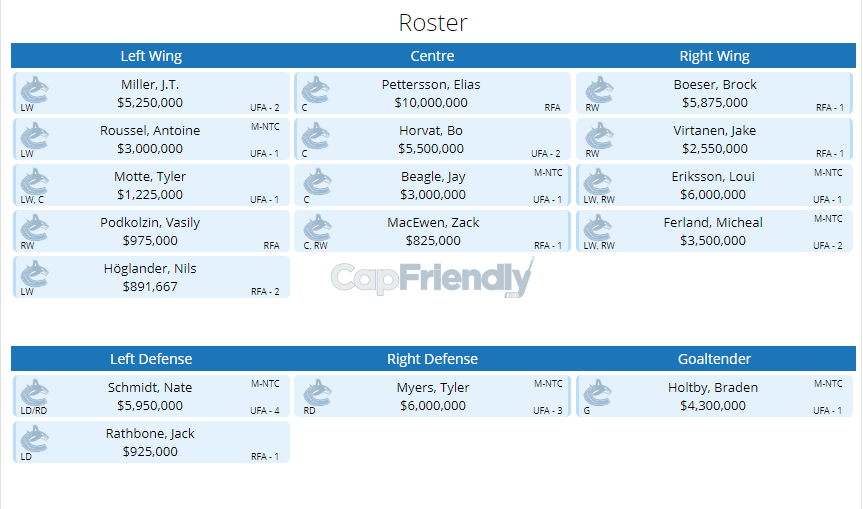 Even if you make the assumption that Micheal Ferland will be put on LTIR, that still would only leave the Canucks with just over $16 million to sign Hughes and fill a ton of holes on the roster.

It’s difficult to project a Hughes contract because of the unique circumstances brought on by the pandemic and the fact that the only player who is a close comparable — Cale Makar — is also still on an entry level contract.

If Hughes were signed to a long-term deal with the cost around, say, $9 million per season, the available salary cap space suddenly drops to only $7 million available for three defencemen, Thatcher Demko, and a forward. There will be a number of other Canucks with expired contracts, most notably Demko, Adam Gaudette, Alex Edler, Tanner Pearson, and Olli Juolevi.

There is another inevitable cap crunch coming here, and signing Hughes to a bridge deal is one way to create a bit more salary cap relief. Again, it’s difficult to project, but the Canucks could theoretically save around $3 million by giving Hughes a one or two-year deal and use that to shore up the roster elsewhere to keep them as competitive as possible.

It’d be nice to assume the Canucks would be able to clear some bad contracts to create some more room to maneuver, but the same was said about this offseason and no bad contracts were moved out. If this offseason is any indication, offloading salary is not going to be an easy task in the NHL for the foreseeable future. A buyout is a feasible option but likely won’t clear enough salary cap space on its own.

In the bridge deal scenario, by the time Hughes is negotiating his next, more expensive contract — even if it’s only one more season away — the Canucks would have an extra $19.3 million thanks to the expiring contracts of Loui Eriksson, Jay Beagle, Antoine Roussel, Braden Holtby, and the ending cap recapture penalty for Roberto Luongo.

If the Canucks could get Hughes on at least a two-year bridge deal, that would present the Canucks with a strong window of opportunity in the 2022-23 season, since Bo Horvat ($5.5M), and JT Miller ($5.25M) would have a year remaining on their team-friendly contracts, and Nils Hoglander and Vasily Podkolzin would still be on entry-level deals.

One main risk of a bridge deal is that the player could then have a breakout season and demand more money than they would have before, but that risk is slightly mitigated in this case since Hughes is already one of the top defencemen in the league.

It’d be nice to just be able to go back in time and undo a number of the bad contracts that are currently making life much more difficult on the Canucks, and it’s easy to think about how good this team could be right now if they had been a bit more conservative in previous free agencies.

But hindsight is 2020 and the mistakes have been made. The management team now needs to figure out how to live with those mistakes and chart the best path forward to a successful future.