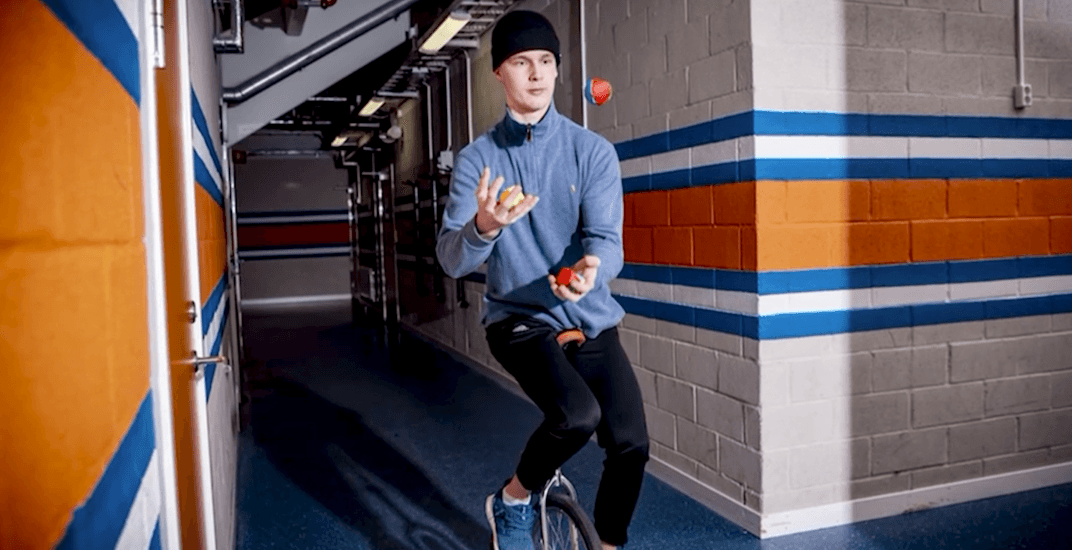 If this hockey thing doesn’t work out, Elias Pettersson could have a future in the circus.

Or as a busker.

That’s because apart from being an excellent hockey player, Pettersson knows how to juggle while on a unicycle.

We’ve seen goaltenders juggle to prepare for games, but juggling for forwards is less common. And I’m not sure we’ve ever seen a unicycling juggler in hockey.

I don’t know why or how, but Swedish newspaper Kvällsposten uncovered the Canucks prospect’s hidden power in a recent interview.

“My father was good at unicycling when I was younger and then I wanted to learn that too,” said Pettersson (translated with the help of Google Translate). “Then I thought it was cool to juggle so I learned that too.”

Pettersson has had a spectacular season with Vaxjo, his first in the top professional league in Sweden.

He broke a 42-year-old record held by Kent Nilsson in March, surpassing the highest point total by a junior-aged player in the league’s history. His 56 points in 44 games were also good enough to win the league’s scoring title.

And he owes it all to knowing how to juggle while unicycling.

Ok, I made that last part up.

But the 19-year-old has been pretty amazing this season. Since winning the scoring title, Pettersson has continued his assault on the Swedish Hockey League in the postseason.

Pettersson is tied for third in playoff scoring, playing fewer games than the two players ahead of him in the race.

His goals, as we’re already becoming accustomed to, were of the highlight variety.

Drags it around the defender, puts it top corner – fired up after that one. pic.twitter.com/1LU1fsOae9

The usual snipe show from Elias Pettersson for his goal today#Canucks pic.twitter.com/pIcd30NQxO

He showed incredible patience on his latest goal, the game-winner in overtime, which swept Malmo and put Vaxjo into the semi-finals.

Pettersson is expected to make his move to North America next season, perhaps in the NHL, with the Canucks.