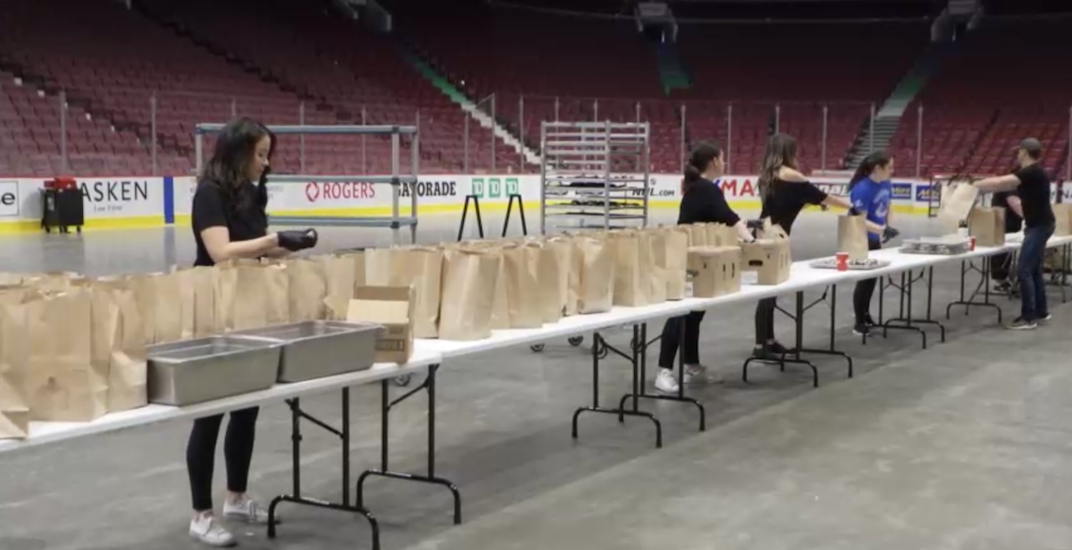 Instead of a lineup of hockey players competing in the Stanley Cup playoffs, Rogers Arena is home to an assembly line these days.

The home of the Vancouver Canucks has had its ice removed, as team staff prepare meals for the less fortunate in front of 18,000 empty seats, while following BC health guidelines of frequent hand washing, disposable gloves, and two-metre distancing.

The Aquilini Family, with support from Canucks Sports and Entertainment and Toptable Group, said they are producing 3,500 meals per week for The Salvation Army and for families with the Strathcona Community Centre in the Downtown Eastside.

The support is needed even more during the global pandemic, as it has impacted the ability of both organizations to support the growing needs of the community. The Salvation Army, for instance, is no longer able to safely serve a hot, buffet-style meal for those in need.

“This COVID-19 relief program helps provide food security to those who need it most in some of the most vulnerable neighbourhoods in Vancouver,” the Canucks said in a release.

The Salvation Army receives 550 lunches daily from Tuesday to Friday, consisting of a sandwich, salad, fruit, and a snack.

A total of 24 families associated with the Strathcona Community Centre benefit from full family dinners Monday to Friday, prepared in the main kitchen at Rogers Arena, usually consisting of an entree with vegetables or starch, a salad, and occasionally a dessert.

“Our family is grateful to be able to support these families and individuals in need,” said Canucks owner Francesco Aquilini. “This is an opportunity to give back to our community. Canucks and Toptable employees have been running the program since mid-March, and we’re grateful for the selfless work they’re doing.”

“As an organization that depends on the support of individuals and groups this means the world to our staff and those who we serve,” said The Salvation Army in a statement. “This partnership, during these difficult times, really sums up the incredible community spirit of the Canucks ownership.”

“[We are] so grateful to the support of the Aquilini Family for their generous donation towards food security for Strathcona families,” added the Strathcona Community Centre Association. “The donation will help the SCCA respond to increased needs within our community during these difficult times.”

Since the inception of the COVID-19 relief program, the Canucks say they have provided over 13,000 meals, produced by the team’s hospitality and office staff.