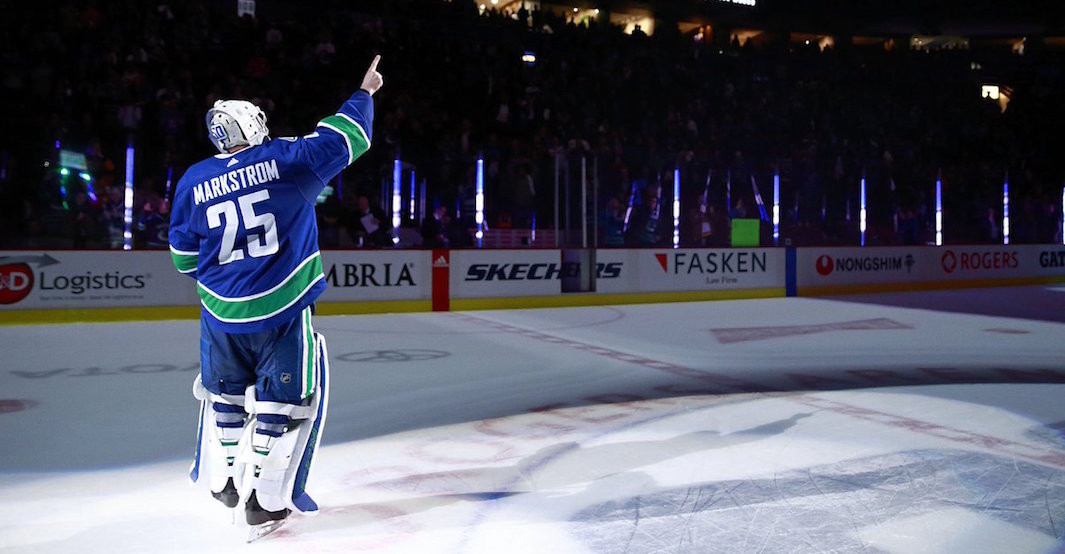 Jacob Markstrom is 100% healthy at his home in Sweden, waiting for the chance to play hockey again.

The Vancouver Canucks goaltender suffered a knee injury February 22, which feels like a million years ago now, doesn’t it?

The All-Star goalie says he’s been fully healthy for over three weeks, which is when he left Vancouver for Sweden. With the conclusion of the 2019-20 season in doubt and Markstrom a pending unrestricted free agent, there’s a chance that when he eventually returns, it will be in another team’s jersey.

In the midst of a career-best season when the NHL paused play last month, Markstrom deserves a big raise on his current $3.67 million salary. And he should still get one, despite the fact that the pandemic will affect revenue, which in turn will affect the salary cap going forward.

Arguably the team’s MVP again this season, Markstrom posted a 23-16-4 record, with a .918 save percentage. His save percentage places him 11th among NHL goalies with at least 30 games played, though some advanced statistics indicate that Markstrom’s value to the Canucks was even higher than that.

“Obviously I would have liked to have a long-term deal and know what I’m doing the next few years here, but that’s not the case right now,” Markstrom told reporters via a video call in the Canucks’ weekly player availability.

“There’s obviously uncertainties and I’d rather know where I’m going to be or know what’s going to happen in the future, but with everything that’s going on that nobody could predict, it’s kind of taken a backseat from everything else.”

While money factors in to every player negotiation, Markstrom appears to have some loyalty to the organization. While it was Mike Gillis who brought Markstrom to Vancouver more than six years ago in the Roberto Luongo trade, the current regime is responsible for grooming the 6-foot-6 Swedish netminder for the No. 1 job.

“I want to stay in Vancouver. In my mind, that’s my goal,” said Markstrom. “I’m still a Vancouver Canuck and I’m super proud of being it. I have no plans of leaving.

“Every player wants to play on a team where they helped you come up in the system, and in the league; obviously you want to play for somebody that wants you. I think everybody feels the same. I know everybody in the organization, from ownership to everybody that works in the locker room and the front office. I’m very comfortable in Vancouver for sure.”

Just what Markstrom will command is up in the air. While a few signings have trickled in around the league, it appears most teams are waiting for a clearer picture of what the salary cap will look like in the future. The salary cap was projected to rise from $81.5 million to between $84 million and $88.2 million, but that was on March 4, prior to North America shutting down.

Perhaps the cap will remain flat, or the league will offer compliance buyouts like they did after the past two lockouts. Either way, it’s going to be a tight squeeze.

The Canucks also have cap issues, which won’t go away as Elias Pettersson and Quinn Hughes will need to be re-signed to lucrative deals after next season. GM Jim Benning also needs to protect the team’s interests in the Seattle expansion draft, which is 14 months away.

But given Markstrom’s desire to stay in Vancouver and the Canucks’ reliance on him, there should be a deal that works for both sides.

“There’s a very bright future that’s here, it’s not even around the corner, I think it’s here right now,” Markstrom said. “The young guys are just going to keep developing and getting better, and get experience. It’s a great group, it’s a great hockey team we got right now and the people and everyone around the team, it’s very exciting.

“I know it’s been tough not making the playoffs for the fans of Vancouver that had such a good run with being successful and going to the playoffs pretty much every year. These couple of years haven’t been easy on anybody living in Vancouver or supporting the Vancouver Canucks, not the least the players either.

Markstrom, by the way, hasn’t lost hope for this season.

“The season isn’t over this year either. I’m still hoping we can get back and play and make a push in the playoffs here. It’s going to be tough to get fans in the building, but give the people and city of Vancouver something to cheer for. That’s 100% of my mindset.”