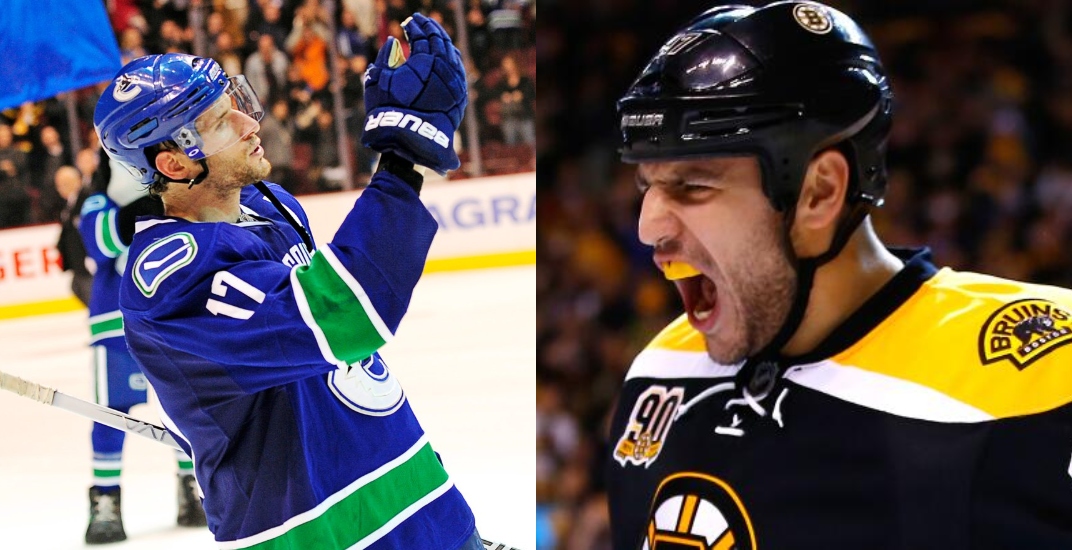 It’s been nearly nine years since the 2011 Stanley Cup Final, but the dislike between the Vancouver Canucks and Boston Bruins is still alive.

Don’t believe me? Try bringing up anything about it on Twitter and see if you can avoid an hour-long fight with fans of either team. The wounds are still fresh.

The Boston Bruins hosted a video chat with former players, who rewatched the 2011 series together.

Milan Lucic made his feelings about Ryan Kesler pretty clear in the chat, mixing in a couple of obscenities for good measure.

Lucic with a jab at Kesler pic.twitter.com/wTxyTOk3Pv

Michael Ryder tried to warn his former teammate, saying: “You better watch what you say on this, you never know, you might get in trouble.”

Lucic, now an overpaid eight-goal scorer with the Calgary Flames, replied: “Buddy, he’s not even in the league anymore, fuck him.”

If you thought that was the end of things, you would be incorrect.

This is precisely what my nightmares have looked like https://t.co/XsFQOQPwOW

NBC replayed Game 7 of the 2011 Stanley Cup Final recently, and it appears Chris Tanev tuned in.

Tanev was a 21-year-old rookie back then, appearing in 29 regular season games and five playoff games, including the Cup-decider.

The salad stays. #Canucks defenceman Chris Tanev gave several updates during an Instagram Live Q&A today, including the fact that he has no plans for a quarantine haircut‍. 🙅🏻‍♂️✂️ pic.twitter.com/XYGWZ13B0V

“It was the first time I’ve watched that game since the actual game happened,” said Tanev. “I sort of forgot most of what happened.”

Tanev, who turned off the game midway through the third period, described it as “a little bit gut-wrenching.”

Tanev correctly pointed out that the Canucks played a decent game to start. Perhaps if they got some puck luck the outcome would have been different.

“I actually thought we played a fairly good game early on. We didn’t get any bounces and then they capitalized on their chances. It was a tough game to watch after that long.

“But I was bored and there was nothing else on TV.”

Jacob Markstrom wasn’t a member of the Canucks in 2011, but he’s sensitive to the hatred of the Bruins among fans in Vancouver.

During his media availability on Wednesday, he was asked who he thought the 2020 Hart Trophy favourite should be. His answer was David Pastrnak, who was drafted three years after the 2011 Cup Final, and yet Markstrom was still careful mentioning anyone from Boston.

“David Pastrnak in Boston, I know Vancouver and Boston aren’t really friends, but he’s an amazing person and an even better hockey player. He’s playing out of his mind right now.”

A small thing, but it just goes to show how aware the next generation is of the rivalry.

Every player, it seems, gets asked the same quirky question from the media these days: who do you most and least want to be quarantined with among your teammates?

Jake Virtanen was let off the hook this week.

Markstrom’s answer: he wants to be quarantined with Alex Edler because they often eat dinner together, and he doesn’t want to be with 6-foot-8 Tyler Myers, because the 6-foot-6 goalie says he likes being the tallest guy in the house.

In more serious news, Markstrom’s status with the team is something worth following.

He can leave as an unrestricted free agent this offseason, but he wasn’t shy expressing his desire to re-sign with the Canucks.

“I want to stay in Vancouver. In my mind, that’s my goal,” said Markstrom. “I’m still a Vancouver Canuck and I’m super proud of being it. I have no plans of leaving.”

It’s going to be very interesting to see how the pandemic impacts the salary cap and what the repercussions are for the Canucks and Markstrom. But if both sides are as eager to keep the Swedish netminder in Vancouver as they seem, there should be a deal that works for both sides.

It’s not every day that the BC Lions get social interaction with Bo Horvat, Ryan Reynolds, and Seth Rogen in the same day. The latter two are apparently Lui Passaglia fans.

Alphonso Davies signed a contract extension with Bayern Munich this week, which is a huge sign of respect for the 19-year-old.

The former Whitecaps midfielder is signed until 2025 with the prestigious German football club, playing a new position.

It’s fair to say Davies has transitioned to the new defender position seamlessly, as he’s now the third-most valuable left back on the planet, with Transfermarkt listing him at $49.50 million in value.