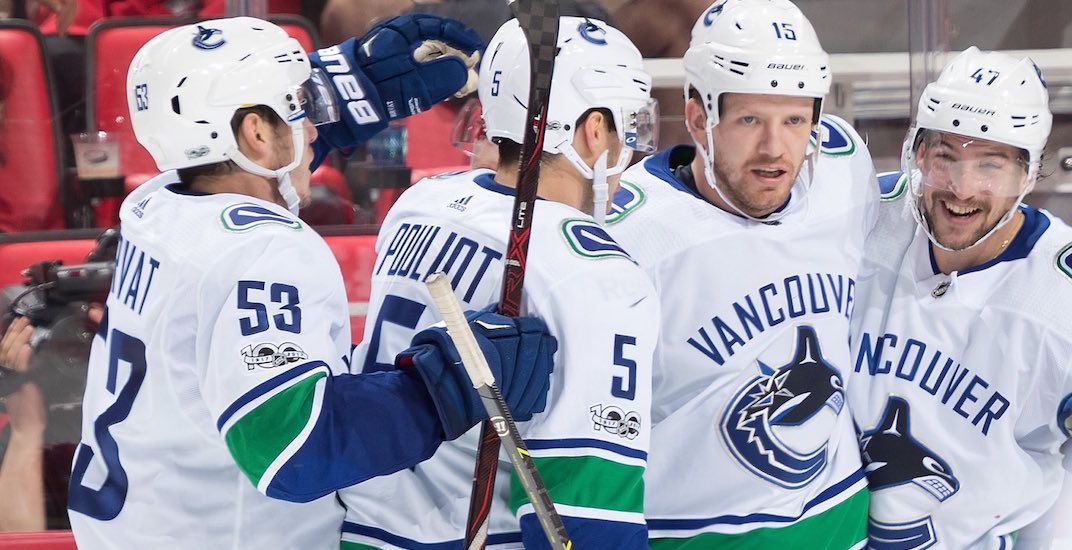 Derek Dorsett is a force to be reckoned with.

Who saw that coming?

Six goals in 11 games has the 30-year-old Saskatchewan product leading the team in goals. His eight points are second on the team.

Not surprisingly, he also leads the team in penalty minutes, with 44 of them. He has 25 hits, nearly double the total of his next closest teammate.

While he didn’t score on Monday night, he was far from a non-factor. He received 19:31 of ice time – a high number normally reserved for star forwards. He had three shots on goal and was credited with two hits. His line, with Brandon Sutter and Markus Granlund, matched up against the Dallas Stars’ top line – a strategy that has been successful for new head coach Travis Green this season.

He’s on pace for 45 goals and 60 points – well ahead of his career highs of 12 goals and 25 points – so surely we know the production will slow down. At least, I think it will.

But it hasn’t happened.

He’s been unbelievable. So unbelievable, that I don’t think he can continue playing these minutes.

Sorry to rain on the Hart Trophy hype.

Those are first-line minutes. They’re also tough minutes for a player like Dorsett, who plays a hard, rugged game – never mind the fact that he’s coming off neck surgery.

The Canucks have won four of their last five games and picked up a point in the only loss, so it’s hard to argue with the results.

Hard to argue, except, for logic.

When John Tortorella coached the Canucks, he openly said he didn’t believe in fatigue. He felt like he could motivate his players to move mountains.

It worked initially, as the Sedins – and the team – started great out of the gates.

But the team hit a wall, and so did the Sedins. They proved they couldn’t play 25 minutes of a night.

While that’s not a number that Dorsett is being asked to play, consider that he’s not receiving power play time. He’s playing hard minutes. Minutes against the other team’s top players. Minutes blocking shots on the penalty kill. All the while, he’s expected to throw bodychecks and defend his teammates by dropping the gloves.

Dorsett is probably loving life right now, but the Canucks’ coach ought to be wise with his usage of him. At a certain point we’re going to see diminishing returns.

If the hard-match checking line continues to be a key strategy for Green, perhaps he can take Dorsett off the penalty kill to reduce the load. Can Jake Virtanen kill penalties instead? He hasn’t in the past, but it’s a skill that can be learned.

When the goals dry up – and they will – the Canucks can use Dorsett as a physical force in a supporting role. Hopefully he hasn’t been reduced to rubble before then.