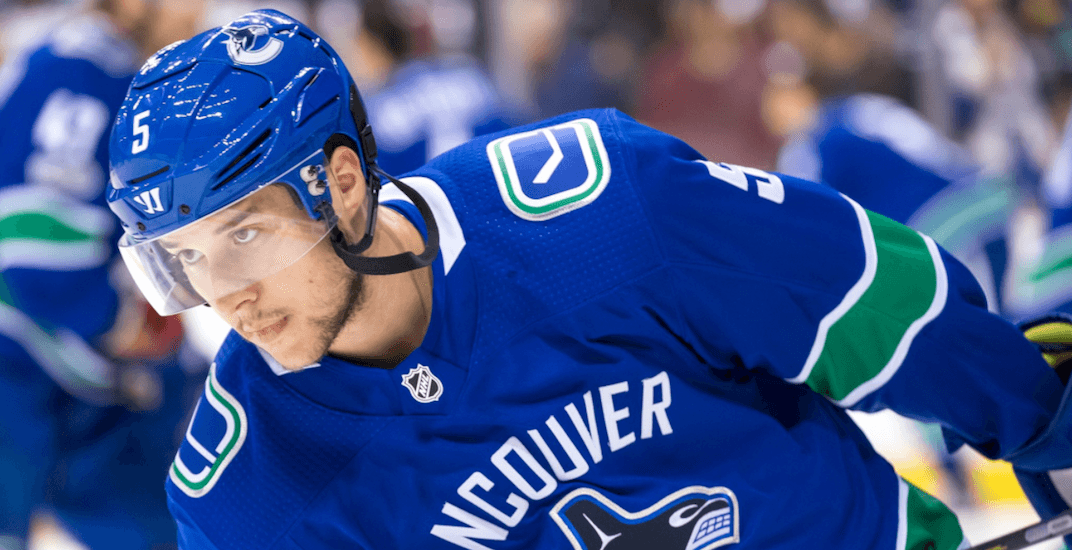 Sometimes, all you need is a chance to make a mistake.

That’s been the case for Canucks defenceman Derrick Pouliot, who appears to be the beneficiary of the classic ‘change of scenery’ this season.

Acquired in a trade with Pittsburgh just over two months ago, it seems like a long time ago that fans were cringing at the thought of GM Jim Benning including a fourth round pick to get him. Andrey Pedan, who was also included in the deal, has seven points (1-6-7) in 18 AHL games.

He’s been a revelation this season.

Once a highly touted prospect as an eighth overall pick, he had a rocky start to his NHL career. The offensive-minded defenceman fell out of favour with the Penguins and the ‘bust’ label was starting to stick.

He turns 24 next month, so he likely needed to show promise quickly with his new team. You only get so many chances in this league.

The early returns have been very promising.

“Being able to get an extended run of games, you’re able to add things to your game,” Pouliot told Daily Hive after practice on Friday. “Just being able to play every night, get a regular shift, I think has really done a lot.”

The fourth-year pro hasn’t come out of the lineup since his first game with the Canucks on October 14.

“You can make a mistake here or there and you’re still going to get a shift.”

Pouliot has not only found a comfort level in Vancouver, he’s leading all Canucks defencemen with 10 points in 26 games. He’s also tops among blueliners on his team with a 53.07 Corsi-For percentage, an indication that he’s far from a liability on the back end.

With Erik Gudbranson getting closer to a return to the lineup, Pouliot once would have been the obvious healthy scratch option for head coach Travis Green.

But now? Not a chance.

The 6-foot, 208-pound rearguard has been gaining the confidence of Green, his old junior coach, for a number of weeks. He scored a goal while playing a season-high 25:08 in his return to Pittsburgh – a win for the Canucks – in what surely had to have him feeling good about his game.

In the seven games since showing up his old team, the Estevan, Saskatchewan native has played over 20 minutes a night on five occasions.

“I think the styles are similar,” he said of the difference between the Canucks and his former team. “The D are able and wanting to get up into the rush more here a little bit.”

The goal he scored against the Carolina Hurricanes on Tuesday was a great example of Pouliot’s potential.

Skating with purpose through the neutral zone, he faked a shot and moved to the middle of the ice on a 2-on-2 before sniping a goal. It was a play that only a confident player could make and one he said he might not have made last year.

Pouliot is just one piece of a new-look defence corps for the Canucks that’s filled with puck-movers now.

Instead of being paired with Gudbranson (who’s injured) or someone like the departed Luca Sbisa, Pouliot’s had a chance to play with Michael Del Zotto of late. It’s a pairing void of a true stay-at-home d-man, but one that works.

“With me and [Pouliot] last game, we had a lot of offensive zone pressure,” said Del Zotto. “We were in their end. We had a couple of 30-40 second shifts that were in their end. I think when that happens, [having a partner] who’s more offensive minded, you guys see the play together, see things similar, we’re able to make D-to-D plays. One guy’s always joining, jumping in the holes, and allowing the other guy to gain some space.

“We’ve had good exits on our breakout, we haven’t spent a lot of time in our own end, and when we’re in the o-zone we’re allowing our instincts to take over and play some good hockey.”

Having two defencemen that can skate and move the puck with efficiency on the same pairing can put opponents on their heels. It’s something their coach has liked.

“I think you can have two guys that are puck movers,” said Green. “I think that’s an advantage, sometimes. It’s nice to have a presence on the back end, obviously when we have [Gudbranson] in the lineup, he brings us a different element. You look at Hutton, Stecher – really all six of our D that are playing right now are fairly decent puck movers.

“You can’t have enough of those guys.”