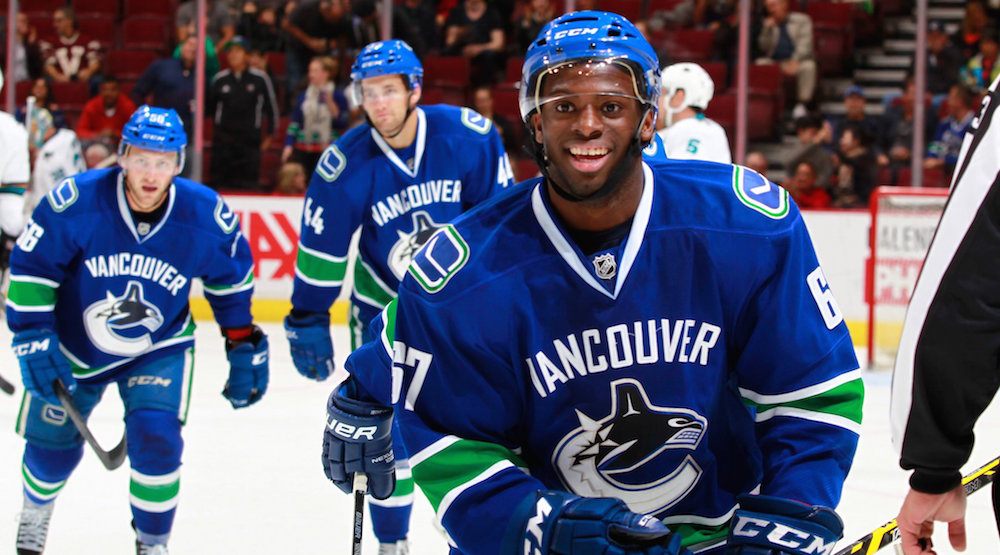 Despite putting up big numbers offensively in junior and in the AHL, Subban never seemed to be in the plans for the Canucks. While nobody ever doubted his offensive abilities, the organization didn’t feel the 5-foot-9 blueliner was reliable enough defensively to play at the NHL level.

With puck-moving d-men newcomers Troy Stecher and Derrick Pouliot passing him on the depth chart in the last two seasons, the writing was on the wall for the 22-year-old.

After back-to-back 36-point years, Subban has just five points (0-5-5) in 16 AHL games this season with the Utica Comets. He’s still waiting to play his first NHL game. Perhaps he’ll get a better opportunity to prove himself in a new organization.

In Dowd, the Canucks get a 27-year-old centre with 91 games of NHL experience.

After being selected in the seventh round of the 2009 draft by Los Angeles, Dowd went on to become a Hobey Baker Award finalist in college in 2014.

Last year was Dowd’s first full season in the NHL, putting up 22 points (6-16-22) in 70 games. So far this season, the Huntsville, Alabama native has just one assist in 16 games.

Dowd played in a fourth line role last year, receiving 12:27 of ice time per game (including 1:33 per game on the power play). His advanced stats were impressive, finishing first among Kings forwards (minimum 30 games) in even strength Corsi For percentage.

For whatever reason, Dowd seemed to fall out of favour with the new Kings coaching staff this year, playing just 7:57 per game.

Very hard to move off the puck, strong down low, good forechecker, works the boards, brings lunch pail, has a heavy if slow release, is a straight line skater, not a lot of creativity but will earn effort goals. Legitimate 4th liner. #Canucks

Dowd is in the last year of a contract that carries just a $640,000 cap hit. The 6-foot-2, 197-pound forward is scheduled to become an unrestricted free agent at the end of the season.

In the short term, Dowd joins an already crowded Canucks forward group. It remains to be seen where he fits in the lineup, if anywhere right away.

Subban will likely join the Kings’ AHL affiliate to start.