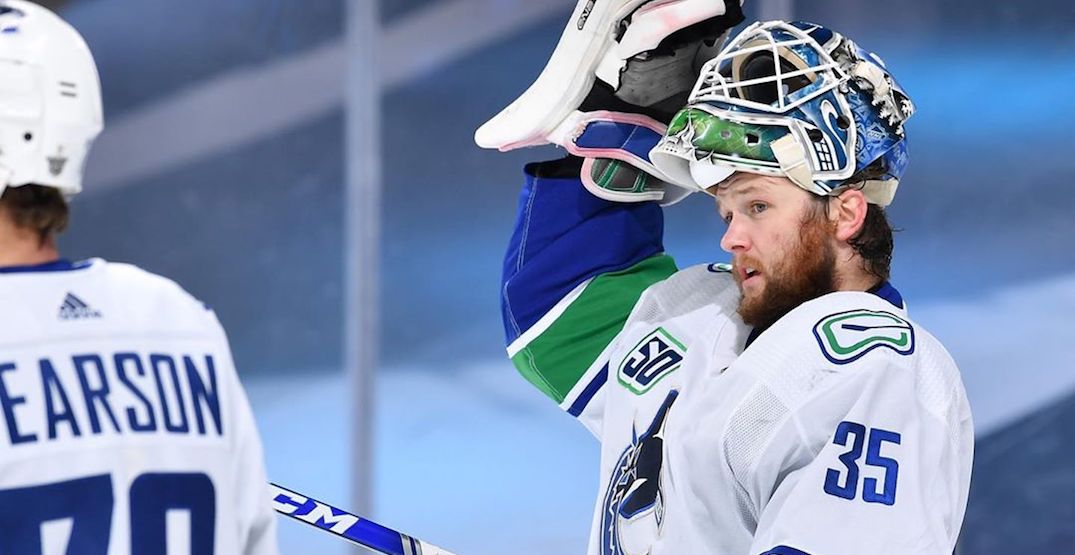 What a difference 48 hours makes.

Two days ago, Jacob Markstrom was the Vancouver Canucks’ unquestioned number one goalie. Despite a series that called for up to five games in seven days, Markstrom was going to play every game, and it wasn’t a controversial decision.

We’ve seen other teams play their backup goalies in back-to-back situations, but not the Canucks, as Markstrom was not only their starter, but their MVP too. And if they were going to beat the heavily-favoured Vegas Golden Knights, they were going to need Vezina-level goaltending to have a chance.

And while that’s still true, nobody could have envisioned Vezina-level goaltending coming from their backup.

Ready for the moment. Thatcher Demko shines bright, making 4️⃣2️⃣ saves to extend the #Canucks stay in the bubble. pic.twitter.com/iON5dSXP2V

Thatcher Demko stopped 42 of 43 shots he faced to save the Canucks’ season in a spectacular playoff debut.

His performance was so sensational that there are now calls from some fans and media members to rethink the team’s entire goaltending situation going forward. Maybe the Canucks should be a little more frugal in contract negotiations with Markstrom, the argument goes, because letting him walk as a free agent wouldn’t be the end of the world with the younger and cheaper Demko in the fold.

While that may turn out to be the right call to make, let’s be real, no team should alter their long term plans significantly based on a one-game sample — even if it was a pressure-packed elimination game.

But in the short term, this series should now be Demko’s to win.

There’s a lot of unknowns with Markstrom’s injury, even more so than in a normal playoffs. With practices closed to independent media, we don’t even know how much Markstrom has been on the ice in between games — traditionally an indicator of a player’s level of health.

On Thursday, Travis Green was asked about his goaltending strategy going forward.

While Green didn’t tip his hand going forward, both he and Demko confirmed on Tuesday that the 24-year-old was told he would be starting the night before Game 5. That means that although Markstrom’s injury might not be serious, it wasn’t a game-time decision, or even a morning skate decision. Given that, it would seem hard to believe that Markstrom will be at full health by Thursday for Game 6, or even Friday for Game 7 for that matter, should the series go the distance.

Markstrom is rumoured to have a groin pull, which is not a quick-healing injury, and also not an easy one to play through as goalie.

The Canucks could elect to play Demko in Game 6, then Markstrom in Game 7 if it comes to that, but surely they’d elect to play a healthy but possibly fatigued Demko after back-to-back wins, right?

And besides, after the way Demko played on Tuesday, he’s earned some level of trust despite his up-and-down regular season.

“There’s a lot of growing pains for all players, never mind a goalie. Physically, he’s obviously a better goalie now [than when he was a rookie],” said Green. “He takes his craft seriously, works hard at his game. It was good to see him [play well]. He was ready last night. He was sharp. His demeanour was calm and that’s a calming effect on a team as well.”

Demko stole Game 5, but stealing the series will be a difficult, if not impossible, task. The Canucks will need to play better in front of the San Diego native, and Vegas will likely have a more in depth pre-scout of Demko’s tendencies.

Regardless, at this point it seems highly likely that if the Canucks are going to pull off a massive upset, Demko will need to be largely responsible for it.