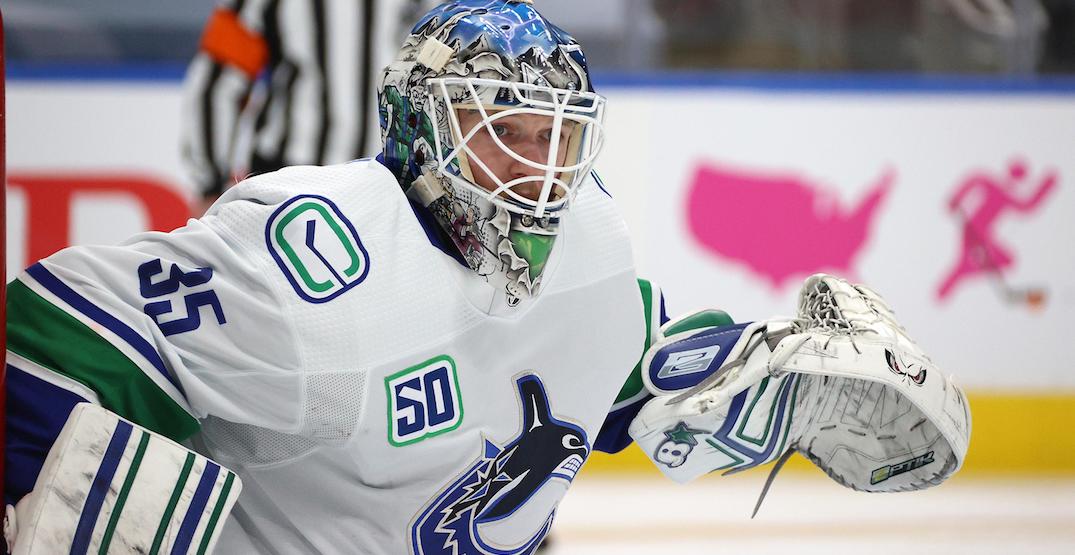 Somebody owes Thatcher Demko a beer.

The 24-year-old saved the season for the Vancouver Canucks with a 42-save performance in his playoff debut to lead his team to a 2-1 victory in a must-win Game 5.

There was a lot of speculation that Jacob Markstrom might be injured and Demko would start the game, and it proved to be true.

It was Demko’s first career playoff game and he hadn’t started a game since March, but he looked neither rusty nor nervous whatsoever.

“We told [Demko he was starting] last night.” Travis Green said after the game. “We got confidence in every one of our guys. [Demko’s] a good pro, a good goalie. He’s worked hard to stay sharp. I was happy for him. He stood tall tonight.”

The Canucks were heavily outshot 43-17 in the game, including by a ridiculously lopsided 18-4 margin in the second period, but Demko stole the show.

Demko became the first goalie since 1997 and sixth in history to make their playoff debut in an elimination game and get the win.

It’s unclear if Markstrom will be ready to play in Game 6. If he is, Green would likely go back to his starter, but Demko proved on Tuesday that he’s more than capable of getting the job done if called upon.

The Canucks looked completely defeated for a vast majority of the first two periods, but right after the Golden Knights finally got one past Demko to open the scoring, Brock Boeser tied the game on the very next shift.

Boeser had one of his best games of the postseason, registering a goal, assist, and five shots on goal while being one of the only offensive threats in the game for the Canucks.

Boeser and JT Miller started the game as Bo Horvat’s wingers, but Green made a switch around the halfway point of the game.

“He was playing well tonight.” Green said of Boeser. “We didn’t have a lot of guys playing better than they had but he was one of them. I think he knew he had a little more in him. As far as putting the (Lotto) line back together it was just about finding a spark.”

The Canucks didn’t generate much offence in this game, but when they did, it usually came from the Lotto Line.

.@_EPettersson with an OMG tip to give the #Canucks a 2-1 lead 🏒🔥 pic.twitter.com/RkP1oTtBBJ

The third period was the best one for the Canucks, but they still needed Demko to make a number of difficult saves to make the win possible.

Quinn Hughes got his 13th assist of the postseason on the first Canucks goal, setting a new NHL record for most playoff points by a rookie defenceman.

Quinn Hughes has put the NHL on alert this post-season, he's the real deal. pic.twitter.com/6jGfZ551Ad

The Canucks’ coaching staff have been notably cryptic this postseason with their lineup decisions, and they had some fun with it in warm up by covering up the names on the sticks and replacing them with… well, different names.

Demko and the Canucks staved off elimination on Tuesday, but they still trail the Golden Knights 3-2 in the series. Game 6 is on Thursday, start time still to be determined.