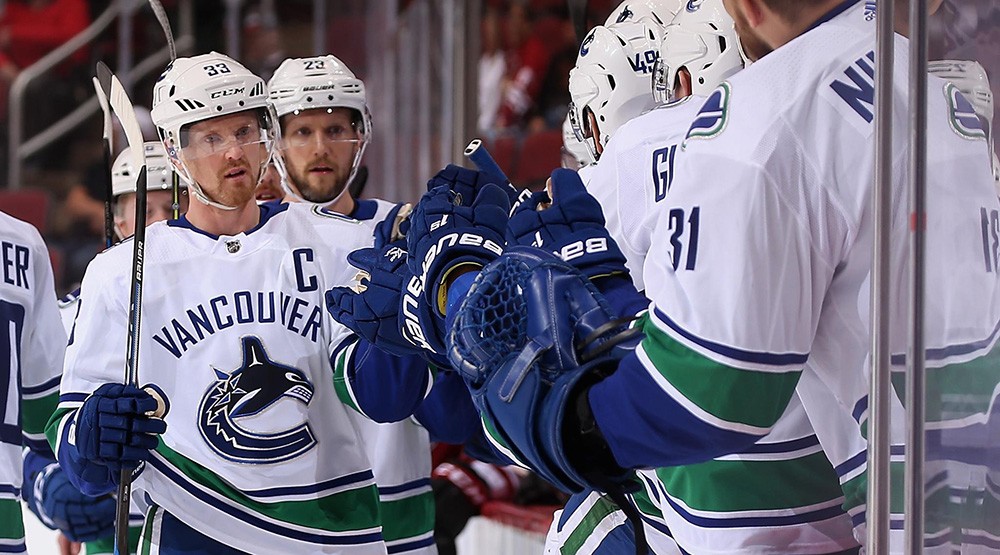 Boy were the Olympics fun. Our country had athletes competing at the highest level, going for the top in almost every sport.

The women’s Canada-USA gold medal game was the first time we’d been that emotionally invested in a hockey game in years.

Those emotions, that enjoyment – that’s the reason we watch sports in the first place.

Now, we go back to focusing all our sports-fan attention on the Canucks. A team that’s inspiring this analysis.

“The Coyotes are bad. The #Canucks are bad. It’s bad vs bad.”

My 6-year-old is an astute hockey analyst.

It’s great analysis, don’t get me wrong. Especially from a six-year-old. Daniel has taught his son well.

Vancouver had 11 even strength shots on net through two periods. They finished the game with 16.

They did beat Arizona 3-1, but it’s hard to find any meaning in a meeting between two of the worst teams in the league, both of whom were out of the playoff picture two months ago.

Honestly, the best and possibly only thing to be happy about was that Daniel scored a couple of goals and Boeser got an assist.

As predicted, the game was boring, so at least we have trade deadline day to look forward to tomorrow, right?

Vanek for a third is gonna be more exciting than this game.

Yeah… not right. Reports surfaced before and during the game that it may indeed be a very quiet deadline for the Canucks, with even a Thomas Vanek trade looking dubious now.

I’ll get to that. First, let’s talk about the game.

Max Domi took this cheap shot at the Canucks future in the first period.

I have a feeling my folder of “Worst Nightmares/Cheap Shots on Boeser” will fill up quickly over the next few years pic.twitter.com/tpNB8D6nVE

The result of that hit?

Boeser just got a birthday X-check from Domi on way off the ice. Getting his back looked at end of bench

Boeser stayed in the game, so hopefully it looked worse than it was.

As mentioned, Daniel had two goals. The first, a power play goal, came off a hell of cross-seam pass from Henrik, followed by a nice feed from Pouliot.

His second – a Boeser shot tipped by Daniel, and it was the kind of goal you expect to see scored on the woeful Coyotes.

give #Canucks Daniel 10 in the last 20 games. 10 players in the league have more goals in past six weeks

Serious question – does Jeff even have to look up the numbers on things like this or are they already all in his head?

Anyway, since we’re going through Vancouver’s goals, we shouldn’t leave out Archibald’s sweet shorty goal off a really high-quality pass from Sutter.

So Edler for Vezina?

Edler‘s gotta make that save.

Sorry Edler, you lost your shot.

Tweeted by Bailey during Friday’s game:

Erik Gudbranson has been on the ice for six of the seven goals #Canucks have allowed since signing his contract extension.

Makes the Canucks hard to play against? Good around his net? Solid shut down defenceman?

The theories are not proving to be true, you know.

Aren’t the “intangibles” supposed to help you win games?

What are you expecting JB to do? Not many assets at his disposal to move. Vanek is really the only one. Doubt we’d get much for anyone else.

The fact that Vanek is the only real asset available for the #Canucks to trade is one reason why Jim Benning has already failed at this trade deadline. https://t.co/U2FbYGoeWt

Speaking of Vanek, and what the Canucks might do before Monday’s trade deadline, Sportsnet’s Iain MacIntyre spoke with Jim Benning Sunday and wrote a worrying article before the game. From the article:

Benning confirmed to Sportsnet on Sunday that there is some interest in Canuck winger Thomas Vanek, but he hopes other teams will come calling about the 34-year-old if more prominent trade chips like Buffalo Sabre Evander Kane and Edmonton Oiler Patrick Maroon get moved ahead of Monday’s deadline.

Matt Sekeres tweeted something similar during the game (it may or may not be from the same source):

#Canucks have gotten a handful of calls on Vanek, but several teams more interested in Kane, Maroon, consider Vanek Plan B. Also, Vanek’s reputation of shrinking in the playoffs doesn’t endear him to coaches (who push their GMs for certain players at deadline).

That’s the team setting Canucks fans up for a silent deadline day, one where Vanek may not even be moved.

If you think that’s bad, perhaps you should ignore this, from later in MacIntyre’s article.

Interestingly, Benning didn’t rule out the possibility of a NTC on a future deal for Vanek even though he has been steadfast in excluding them in recent multi-year contracts for Gudbranson, Bo Horvat, Sam Gagner and Michael Del Zotto.

“That’s something we’ve shied away from giving out because it ties your hands,” Benning said. “But I understand it from the player’s perspective and sometimes that’s the only way you can get a free agent. We look at each case individually.”

So instead of a trade, we might have a one-year extension with an NTC.

The Canucks are definitely trying new and different routes of going about rebuilding the team. You have to give them that.

BONUS: What could come at TDL

Had that discussion with someone today. Jim Benning type of winger. Could soften the PR blow of an inactive deadline. https://t.co/uvzkq4mclI

Wyatt explained why that would not soften the PR blow:

People want the draft picks and a future vision. Citing picking up a 30 year old on waivers would be met with hearty guffaws. Throaty chortles even.

Wyatt’s right. The Canucks could be the laughingstock of the NHL if they make that move on Monday.

Wait to see what happens, I guess.