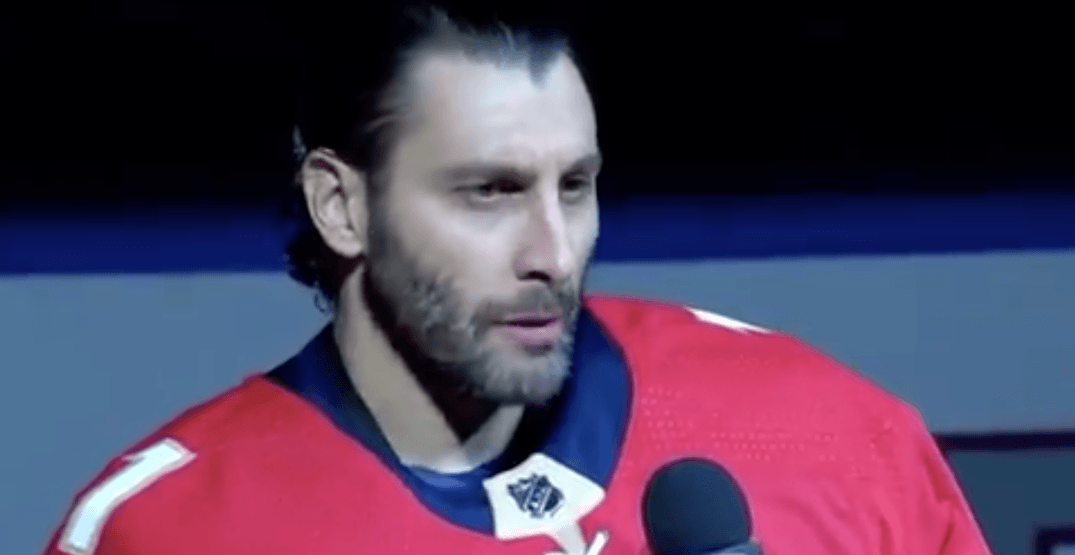 Former Canucks goalie and current netminder for the Florida Panthers Roberto Luongo delivered an impassioned speech in front of thousands of hockey fans on Thursday night, as his team prepared to face off at home against the Washington Capitals.

It was the first time Luongo and his team had hit the ice since the deadly mass shootings at a high school in Parkland, Florida last week.

And that’s where Luongo began.

He noted that his wife was also born and raised in the city, and that his kids go to school there.

“When I’m done playing hockey, I want to spend the rest of my life there in Parkland. I love that city.”

He was in Vancouver at the time of the shooting and “we all know what happened.”

It was hard, he continued, to be on the West Coast while the situation was unfolding in Florida “and not be able to get back home and protect my family. No child should ever have to go through that. It’s terrible.”

Enough is enough, he said. “It’s time for us as a community to take action.”

Luongo then addressed the families of the victims directly, saying, “our hearts are broken for you guys. There’s not much to say. It’s heartbreaking. You guys are in our thoughts. We’ve been thinking about you every day constantly for the last week. Just know that we’re there for you if you guys need anything.”

The victims and the families affected “will be in our prayers,” he added. “Let’s try and move on together.”

Luongo capped off his short speech with words of encouragement and gratitude for the teachers at the high school.

“You guys are heroes protecting your children,” he said. “Some of them didn’t make it trying to protect children. That is truly what a hero is. Those people need to be put on a pedestal for the rest of their lives.”

Luongo’s final talking point came in the form of gratitude for the students that are taking a stand against gun violence in the wake of the tragedy.

“I’ve been seeing what the kids from Stoneman Douglas have been doing,” he said. “I am very, very proud of you guys. You guys are brave.”

The students, he added, “are an inspiration to all of us. At the end of the day, you guys are what’s giving us hope for the future. Thank you.”

“You guys are an inspiration to all of us. At the end of the day, you guys are what’s giving us hope for the future.” -Roberto Luongo.