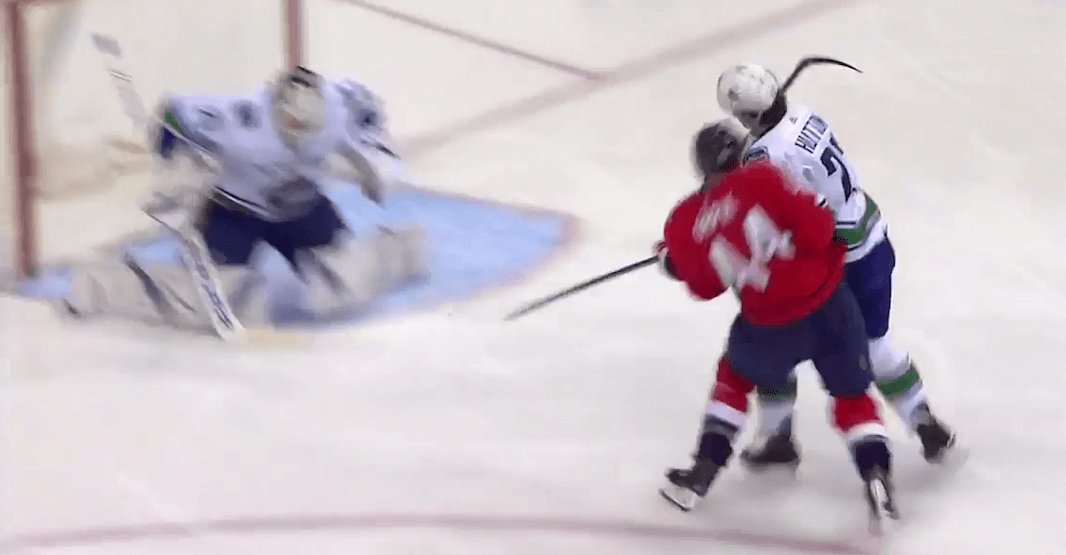 It hasn’t been pretty for the Vancouver Canucks lately.

As outmatched as they seemed on Tuesday, the Canucks still managed to outshoot the Washington Capitals 38-36 by the final buzzer.

The scoreboard read 3-1 at the end of the game, but it could’ve been much worse had Jacob Markstrom not made several big saves – especially in the second period.

When you throw a hit like this, you’re a shoo-in for SixPack Superstar.

Ben Hutton absolutely laid out Brooks Orpik, then fought Devante Smith-Pelly who was quick to challenge him.

It’s been a rough go lately for Hutton. He’s been a healthy scratch a few times and more recently been linked to trade rumours. Nice to see him make a solid hit like that.

It’s only been nine days, but I have to say this is the weirdest goal I’ve seen so far this year.

Why wasn’t there a whistle when the net was on top of Markstrom’s head?

Why did it take Markstrom/Del Zotto so long to get the net back in place?

I have so many questions…

This goal seemed to be the turning point of the game for the Capitals. Considering the quality of the goal, that really sucks for the Canucks.

That's not right, how is Markstrom suppose to get set for the shot when he has a fucking net on top of him?

That goal tied the game and the Capitals would soon score again to make it 2-1 after 20 minutes.

In the second period, the Capitals put the Canucks away, outshooting them 18-4 and taking a 3-1 lead into the third.

3. Boeser on the backcheck

No points for Boeser in this game, but it wasn’t for a lack of effort from No. 6 on Tuesday.

And for all the raving about his offensive contributions, it was the defensive side that impressed me in this game.

Maybe it’s just that everybody else here is slow, but Boeser almost looks speedy coming back on this play.

It proved to be an important play – the Capitals took a too many men penalty and the Canucks capitalized on the power play.

Edler opted not to pass to Boeser, and it paid off for once as his shot was tipped in by Daniel Sedin.

4. The answer to the Edler pass mystery?

One of the biggest questions this season (at least on Twitter) has been Edler’s lack of passing to Brock Boeser on the power play, it was even brought up to Travis Green.

In his weekly 31 Thoughts column, Elliotte Friedman offered up a theory one coach (anonymous, of course) provided him about the situation.

“…if anything goes wrong, because of the way he has to turn, Edler is more comfortable defending a rush from Henrik Sedin’s side than Boeser’s.”

Not sure if I subscribe to that theory, but it’s an idea.

Another idea is that he feels opponents are already anticipating a pass there.

If you noticed in the Edler goal gif, the forward cheats up to defend the passing lane to Boeser, which leaves Edler time and space to get a good shot off.

Okay so it was a weak shot going wide, but in theory you get a good shot off.

I like the ‘pass it to Boeser’ strategy better, but that’s just me.

That deflection from Daniel Sedin was his 10th goal of the season, and that’s the 15th consecutive season he’s hit double digits.

5. Gudbranson scores or did he?

I’m definitely no Gudbranson fan, but I thought this was one of his better games.

The third Capitals goal initially appeared to be batted off Gudbranson’s glove and into the  net, but on the replay it appeared that Evgeny Kuznetsov – who got credit for the goal – batted the puck out of mid-air.

Speaking of Gudbranson, Friedman dropped a bit of information in his weekly 31 Thoughts column about a potential trade.

“There is no shortage of people who believe Gudbranson will be better on a better, more structured team, but you’ve got to make a deal and the Canucks are trying to drive up the price. The end is difficult to pinpoint, because it is one of those trades that could end with a 10-minute phone call, or become a big poker game that goes for awhile.”

Based on the language used, it seems to be more a matter of ‘when’ as opposed to ‘if’ when it comes to Gudbranson being traded.

Also, I don’t know these “people” are, but I’m glad Gudbranson seems to have a good rep around the league.

Another tidbit from Friedman’s column.

Boeser doesn’t need much time to do damage.