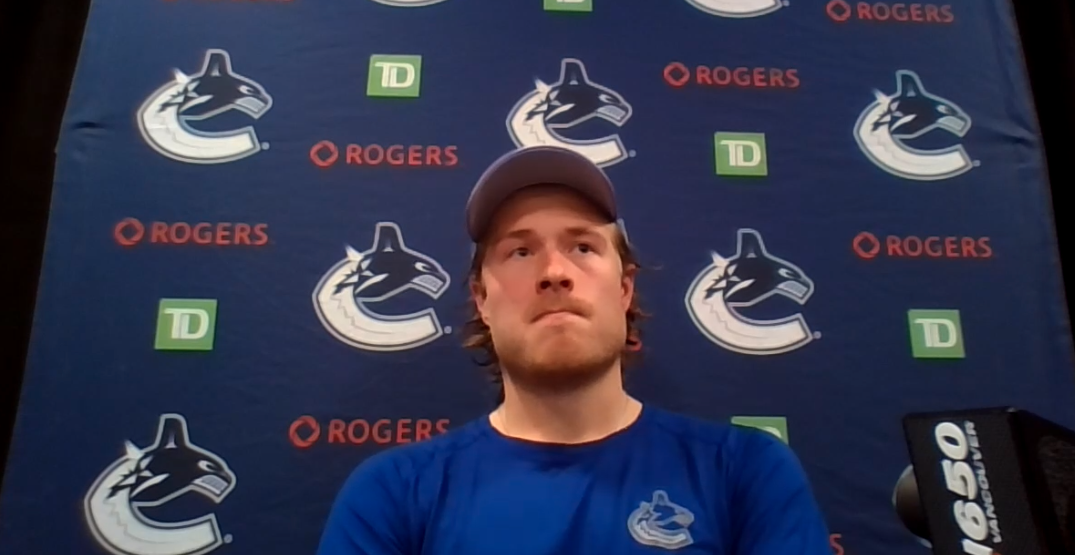 The Canucks have won just five of their first fifteen games, and sit in seventh place in the Pacific Division midway through November.

On Saturday, the Canucks jumped out to a 2-0 first period lead against the Vegas Golden Knights, but ended up falling apart defensively in the second half of the game and lost by a score of 7-4.

Asked if blowing the lead made the game tougher to stomach, Boeser shook his head.

“It’s just frustrating in general,” Boeser said. “I hate losing and we’ve got to find a way to win.”

Vancouver did have its chances at victory on Saturday. After Vegas took leads of 3-2 and 4-3, Nils Hoglander’s second goal of the game tied things up at four goals apiece just under three minutes into the third period.

But three Vegas goals in a 7:03 span in the final frame made what was a close game into a laugher.

It was the second consecutive game where the Canucks gave up seven goals, after losing 7-1 to Colorado on Thursday evening.

And while Boeser said the team had a good effort against Vegas, the bottom line is the team’s playoff chances are quickly fading unless the Canucks can begin to reverse their fortunes.

The team is currently six points out of eighth place in the Western Conference for the final postseason berth, with MoneyPuck.com giving the Canucks just a 10% chance at making the playoffs this year, the third-lowest percentage in the league.

“There’s good response for sure,” Boeser said. “But at the end of the day, it’s about winning and you got to find a way to win hockey games.”

Boeser said he was disappointed with the team’s defensive effort in front of goaltender Thatcher Demko. The Canucks have given up 104 shots against them over the last three games.

Demko was pulled after giving up six goals in two periods against Colorado but stayed in the net for all seven goals against Vegas.

#Canucks fired their GM (Pat Quinn) days after this. https://t.co/EbphvIzA3N

“It’s hard honestly, every night for us… it sucks for him,” Boeser said. “We’ve got to do better for him.”

Boeser highlighted the team’s special teams as one of the areas costing the Canucks right now.

The Canucks went 0-4 on the power play, while Vegas scored twice on six opportunities with a man advantage, including Jonathan Marchessault’s game-winning goal.

Vancouver has allowed a power play goal in each of its last eight games.

“We’re struggling on the penalty kill,” Canucks coach Travis Green said. “[We have to take it] one kill at a time.”

The Canucks will be right back at it on Sunday, November 14, with a road game against the Ducks again. Puck drop is set for 7 pm PT, with the game being shown on Sportsnet Pacific.