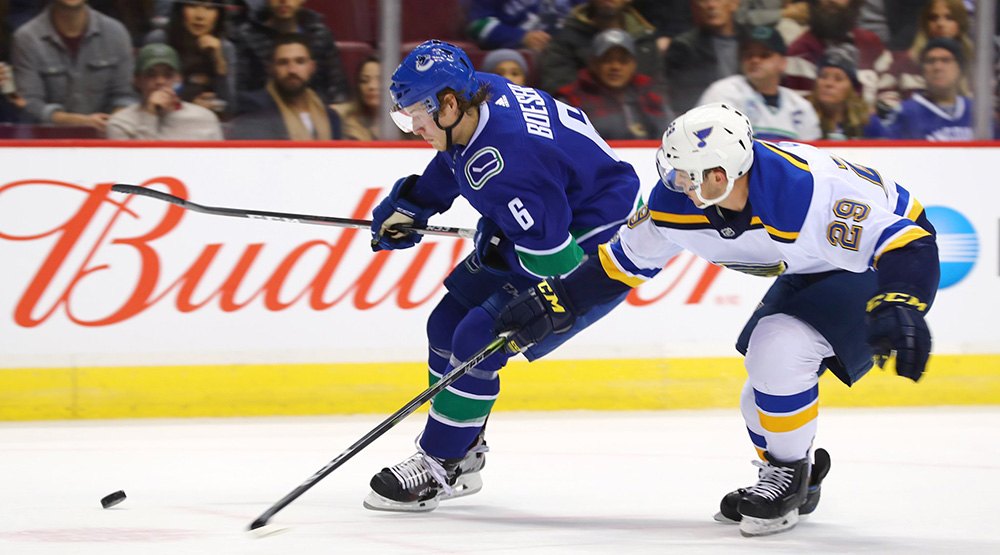 It’s amazing how a game can feel completely different than its result.

Sometimes an overtime or shootout loss feels like a win if your team came back to tie it up. In that case, your team stole that point where it was going to get none.

Sometimes an overtime loss feels like a four goal loss – that can happen if your team gives up a lead, basically losing that extra point they were on their way to getting.

Vancouver’s overtime loss on Saturday… it felt like a loss. Up 3-1 halfway through the game, the Canucks had it in the bag with a two-goal cushion.

I’ll give more detail about how how they arrived at their 4-3 OT loss in a second, but the score tells the story itself. The Blues scored three straight, erasing the lead and stealing the points.

And if you want to know how the Canucks and their fans feel – a look at Thomas Vanek’s expression here will tell you all you need to know.

Maybe it just felt like the turning point and a team as good as the Blues were bound to come back anyway, but at the end of the second period Vancouver nearly went up 4-2 on the Blues.

With the ref’s hand in the air for a penalty call against St. Louis, Vanek smashed the puck into the net.

What happened? Not sure, really. I mean, we know the Blues got a shorthanded breakaway right off the faceoff, but somehow on this play Alex Edler took a hooking penalty, cancelling that power play they were just starting.

Now, some might be tempted to make this game about these two blown calls, but go back and watch that entire play where Vanek’s goal was called off, and keep in mind the ref already has his arm in the air for a Blues penalty.

Clearly the St. Louis player did close his hand on the puck, and while it wasn’t a hand pass, that’s a pretty clear sign of control, meaning the play should be whistled dead on the delayed call.

The penalty on Edler, though? Yeah, bad call.

It all started so well for the Canucks. They outplayed St. Louis early and deserved even more goals in the first period.

The Sedins were flying with Virtanen on their wing. They had two grade-A scoring chances here, playing against the Blues top line. First Henrik nearly scored, then Daniel.

Virtanen nearly had a highlight goal himself with this speed burst and wrap that was stopped not by the goalie but a great defensive play from Pietrangelo.

The Canucks got on the board with this unreal effort from Boeser halfway through the period.

Two things I liked about this one: First, Boeser completely bypassed the passing option Baertschi presented him, and second, Horvat knew exactly what was coming and set the screen for his shot.

There’s also the fact I was so blown away by the quick release that in my notes I wrote, “What a goal by Laine.”

Granlund scored this shorthanded goal early in the second.

And then Baertschi scored a power play goal to put them up 3-1.

If only hockey games were only 31 minutes long.

3. A tale of two Sedin lines

Here’s the Blues’ second goal at the 13 minute mark of the second period. Watch Virtanen at the bottom of the screen.

That failed clearing attempt by the Sedin line led to their effective benching for the rest of the period.

By the end of the game, Henrik and Daniel played about 11 minutes, while Virtanen played under 10.

And if you thought overtime would at least prop the Sedins’ ice time up a bit, it didn’t happen. They were passed over, while Sutter and Eriksson were part of the three-line rotation.

And, as you know, that didn’t work out too well either.

We’ve heard about it for months – this physical game Gudbranson brings. The intangibles, the leadership. If you’re a Gudbranson defender, save this on your phone. Pull it out and describe it in detail anytime someone tries to take down your guy with stupid “analytics”.

This is eye-test at its finest right here.

And while you’re showing this around, someone make sure it gets to Ottawa, Toronto and Florida, please.

Sam Gagner was a power play specialist for the Blue Jackets last year – a specialist at the offensive end. So when we saw Green putting him on the Canucks shut down line Saturday, many wondered if Green was thinking straight.

Joel Edmundson – the defenceman – snuck in from the point to hammer the shot home. And if you’re thinking the right defenceman is the left winger’s check (meaning Gagner’s) you’re right.

Boeser scored in the first, so what did HNIC have for the first intermission? An Auston Matthews interview.

We have yet to confirm this was how Boeser’s appearance on After Hours went. 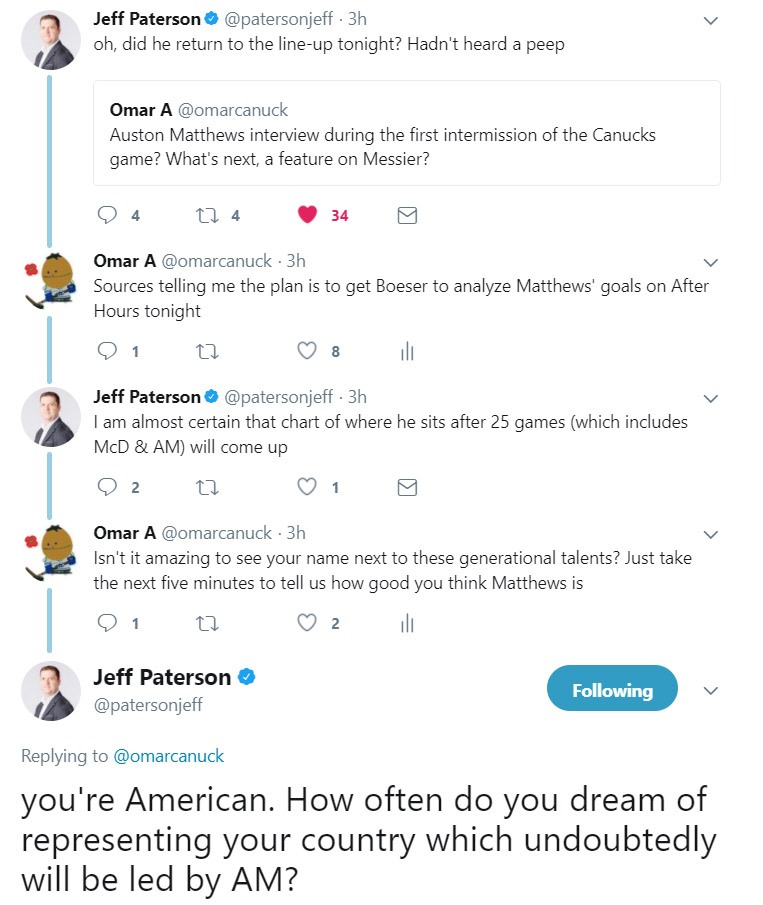 Speaking of Messier, this was one of the best things to happen at Rogers Arena in years.

“Messier Sucks” chant breaking out at Rogers Arena. Not sure why.

My sources are telling me it was the Larscheiders who started the chant (and my sources are strong on this one).

Pretty amazing this is news, but Linden finally made a radio appearance by being a guest on Sportsnet 650’s round table on Friday.

The way he and Benning are communicating with the media, or hardly communicating much at all, is a 180 degree change from their first three seasons on the job, and it’s surprising no one’s talking about it.

The amount of time they had for media and fans in the first three seasons, it felt as if one of Linden’s biggest ideas to get the fans back on board with the team would be by communicating.

Transparency was going to solve all their problems. Explaining why a trade didn’t work out? Be transparent. Justifying the thought process on a call up? Just be open. Explaining, weekly, why the team was one of the worst in the NHL, why the defence is so bad, and why the team doesn’t just rebuild? … OK so they probably didn’t see that one coming.

Town halls and summer summits were held, Benning made weekly radio appearances, and Linden never turned down a request.

To me, either ownership or Linden was convinced part of Gillis’ downfall in terms of the fans’ confidence was his lack of media savvy.

What I’d like to know is whose idea was it to stop talking this season? Honestly, it makes sense, and whoever made the decision deserves serious credit. Without Benning’s weekly radio hits, there are no quotes tweeted out, no fans snickering endlessly at how he and Linden have worded this or that, and whoever runs the “Lindenning Quotes” Twitter account is in a sad, dark place.

Anyway, back to Linden’s round table appearance – I put aside an hour to listen to it earlier Saturday, hoping to get some quotes for the SixPack.

While listening, ready to capture the unforgettable quotes as they flew in, I wrote down my thoughts every few minutes.

Here, I present those riveting thoughts.

15 minutes in: they’ve talked about players who scrapped and clawed to make it in the NHL like Rob DiMaio and Marty McSorley. They compared Dorsett to McSorley and talked about some of Linden’s Medicine Hat connections.

My thoughts: Walker and Rintoul are throwing out the softballs early here, warming Linden up for the tougher questions that will come soon.

25 minutes in: They’ve spent the last ten minutes talking about what sports Linden and DeBrusk enjoy outside of hockey. DeBrusk is into tennis and Linden’s into cycling (huge surprise) and cross country skiing. They’re both really excited about Denis Shapovalov.

My thoughts: Are they going to ask Linden a question about the Canucks soon? I love tennis but I couldn’t give a crap about his thoughts on the sport.

30 minutes in: Now they’ve been talking about DeBrusk watching his son Jake’s hockey games and transitioning to their current roles – Linden as President of the Canucks and Debrusk to HNIC.

My thoughts: Knowing that Linden only stayed for the first hour of the round table, it’s starting to dawn on me that Rintoul and Walker have no intention of asking him any questions about the team he’s the President of (which is the reason he’s on this show, you’d think). Did he agree to come on this show only if they stayed away from any actual questions?

33 minutes in: Rintoul asks Linden “Have you had days that are tough” in your role as President?

My thoughts: Listening to the questions asked on this round table is making this a tough day for me.

36 minutes in: Talking about how Vancouver compares to other hockey markets, Walker says sometimes it seems talking about the team is a lose-lose proposition because people want the team to tank and then they complain about the team losing to Vegas.

My thoughts: I don’t even have the energy to get into this garbage 3-year old take.

41 minutes in: Walker asks – Is the pressure a Canadian team is under part of the reason a team hasn’t won the Cup since 1993 in this country?

My thoughts: Uhhh Edmonton, Calgary and Vancouver were all one game away from winning the Cup since 1993. Don’t those show Canadian teams can compete at the highest level despite the pressure? Also, let’s be honest, Vancouver was the better team in 2011 and would’ve won if not for injuries and goaltending.

Another thought: Holy crap, Linden’s done in about 13 minutes and they still haven’t talked about the team.

47 minutes in: They’ve been talking about where fighting is going in hockey for about seven minutes. Linden: “I think what is happening is fighting is being phased out of hockey.” (Hot take, I know). Linden also mentioned a hit by Edmonton’s Jujhar Khaira and pronounces the name “Kahara… uh Kiara.” Yes, that was the highlight of the round table so far.

Fifty-three minutes in (the first “hour” is 55 minutes long, total): Walker – We’ve got about a minute left here, let me ask you quickly, what you’re most happy about with your team right now and where are you lacking right now?

Linden: Organizationally, I look at some of our young players whether that’s Bo or Sven or Brock or Jake, Hutton, Stech, Derek – where they could get to. We’ve got some players that have stepped into the AHL: Brisebois, Chatfield, MacEwan, Goldobin’s having a good year. Then the prospects below that – Gaudette, Elias Petterson, Jonathan Dahlen or Thatcher Demko – we’ve got a group that’s kind of making their way, it’s going to take time. Beyond that, the way we’ve played this year. Last night was disappointing, but the style of play – Travis has got our group competitive on a nightly basis and playing a different style, not that we’re going to be perfect every night, but there’s definitely been some good stories.

My thoughts: Holy crap, Linden just wasted that last minute of the show naming players in the Canucks organization and completely avoided answering… and it wasn’t even a half-decent question.

Walker at start of hour two: Trevor Linden, new father, had to run.

Me: So much for that hot SixPack material I was hoping for.