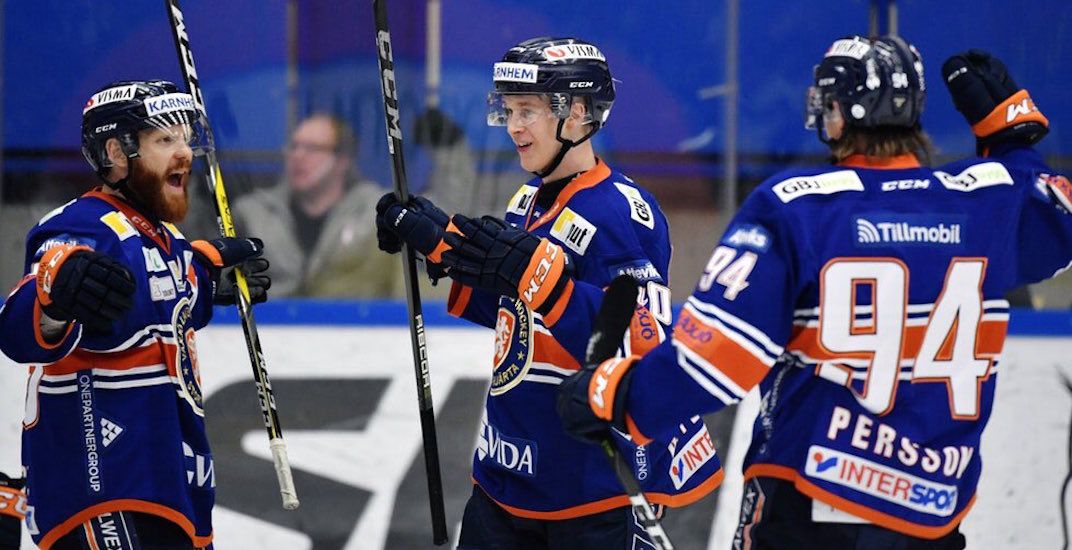 When the Vancouver Canucks dropped three spots to fifth overall in the 2017 draft, many fans were understandably devastated.

Nico Hischier and Nolan Patrick were touted as the top two prizes of the draft, and the thought of missing out on one of them felt like yet another proverbial kick to the shins of Canucks fans.

But Elias Pettersson is proving that he isn’t necessarily just a consolation prize. In fact, he could be the best player out of that entire draft class.

He helped his case again on Saturday, registering a goal and two assists to vault himself atop the SHL scoring leaders.

His first goal was a terrific one-timer on the power play:

Leading any pro league in scoring is extremely impressive on the surface level, but digging up a little more context behind the stats, it looks even more encouraging for Pettersson.

The first thing to mention is that, while Pettersson is in a three-way tie for the SHL scoring lead, he has played fewer games.

Take a look at ice time in those games, and it shows Pettersson is getting his points despite playing significantly less than many of the other top players.

The other thing so encouraging is the age of the players around him. Pettersson just turned 19, while the average age of the four players rounding out the top five is 31 years old.

For all the concern about his frame – Pettersson is 6-foot-2 but only 161 pounds – he doesn’t seem to have any problems playing against physically developed men.

A league of his own

When you reduce the list to look solely at teenagers playing in the SHL, you truly get a sense of how good Pettersson is playing.

Scoring in a men’s league as a teenager is certainly not as easy as Pettersson is making it look.

The next highest scorer is defenceman Rasmus Dahlin, who is expected to be the first overall pick in the 2018 draft. Lias Andersson, drafted just two spots after Pettersson by the New York Rangers, is also well back.

It’s not a case of a weak group either. Pettersson is scoring at a pace never before seen in the SHL by someone his age. 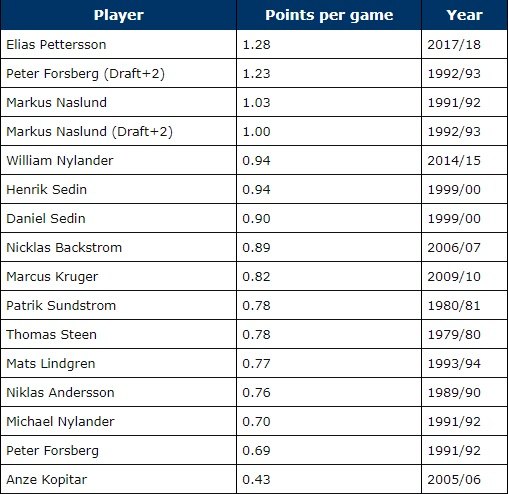 Through 18 games, Pettersson is scoring at a higher rate than former Canucks like Naslund and the Sedins did in their comparable seasons. He also tops Peter Forsberg and Nicklas Backstrom.

Pettersson is also outpacing William Nylander, who is off to a great start in his NHL career in Toronto.

And if you think Pettersson is getting his point totals inflated from good linemates, think again.

Pettersson is a full ten points ahead of the next highest scoring forward on his team, Robert Rosén.

It’s also impressive that 10 of his 14 assists are primary assists.

Of those four secondary assists, one of them was this incredible diving poke check that led to 2-on-1 in Saturday’s game:

While there aren’t many, it’s important to point out the concerns with Pettersson’s game.

Few, if any, can survive in the NHL at his weight. He will need to put on pounds, and fortunately his 6-foot-2 frame should allow for that.

Then there’s the larger ice surface. Some players adjust better coming to the North American rink size than others, and Pettersson will need to learn to adapt to making plays with less time and space.

Another minor concern could be Pettersson’s lack of 5-on-5 scoring. Even strength scoring is usually looked at as more sustainable, and over half (13) of Pettersson’s 23 points have come on the power play.

This isn’t a major concern though, because his 10 even strength points in 18 games is still very impressive. You could also see it as a positive – Pettersson is showing he could be the one to eventually revive a Canucks power play unit that has been hurting for a few seasons now.

In terms of speed, skill, shooting, and hockey IQ, Pettersson already looks NHL ready. If he can put on weight and adjust to the smaller ice, he will be a very dangerous player.

Get on the Elias Pettersson hype train while you can, because it’s picking up speed by the day.