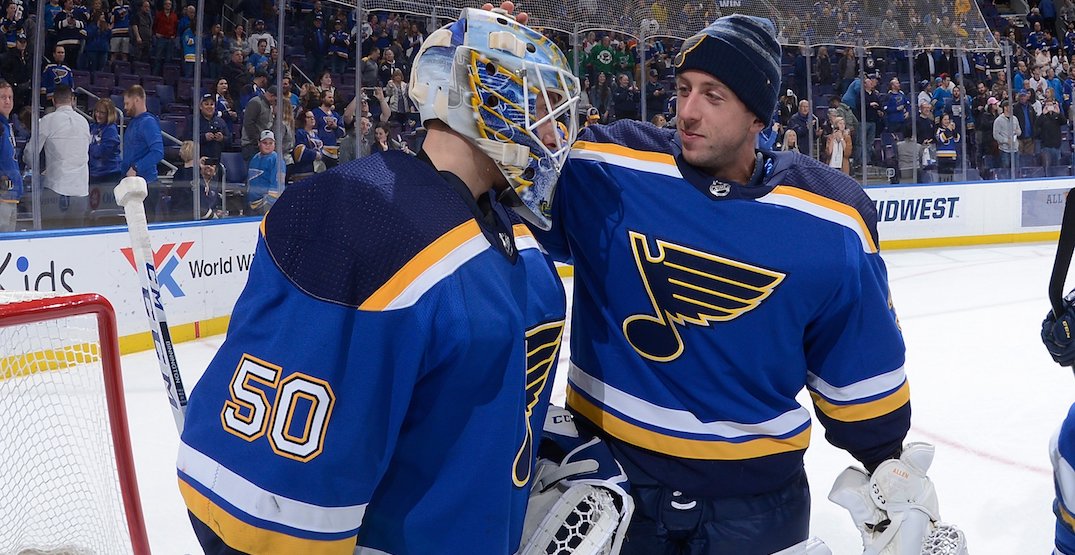 Heading into a do-or-die Game 6 against the Vancouver Canucks, the St. Louis Blues don’t know who their goalie will be.

Or at least they’re not saying.

Berube certainly has an interesting decision to make.

Jordan Binnington was one of the biggest reasons why the Blues won the Stanley Cup last year, and was the team’s undisputed No. 1 goaltender during the regular season. But he has also been outplayed by Jake Allen, the Blues’ former No. 1 goaltender prior to losing the job last year.

Allen (.927) had a better save percentage than Binnington (.912) during the regular season, albeit in fewer games — Binnington started 50 games, Allen started just 21. But the job was still Binnington’s to lose in the postseason, which he has, posting a .862 SV% in four starts. Allen, meanwhile, has a .939 SV% in four starts of his own.

So with their season on the line, will Berube look to the guy that won it all last season or the guy that’s performed better this year?

Well, that’s a popular topic of discussion in St. Louis right now, as a goaltending controversy is in full swing. During his off-day media availability, Berube was asked numerous questions about the team’s goaltending, as were some of the Blues players.

“You gotta look at what your goalie did in the past at certain times and what he’s done this year at certain times,” said Berube. “Listen, we have faith in both of our goalies. I think that Jake Allen came in and did a real good job for us. To me, Binner at the start of the playoffs during the round robin was excellent. They’re kind of like our team right now. Like I said, I’m not going to make a decision on it. I’m going to think about it a little bit today.”

Allen let in four goals in Game 5 on Wednesday, but he couldn’t be faulted too much on any goal, with the exception of Jake Virtanen’s short-side shot that beat him. But he was solid in Game 3 and Game 4, earning the win in both games while making a combined 61 saves on 64 shots.

Berube said Binnington is still in good spirits, as he remains ready for another chance.

The Canucks, meanwhile, have no decision to make in goal, as Jacob Markstrom has been steady throughout the postseason, with the exception of Game 4 against Minnesota. Markstrom has a .927 save percentage and a 6-3 record in nine postseason starts.

With a win tonight, the Canucks can book their ticket to the second round of the Stanley Cup playoffs for the first time since 2011. A loss would set up a win-or-go-home Game 7 on Sunday.

The puck drops tonight at 6:45 pm PT on Sportsnet.