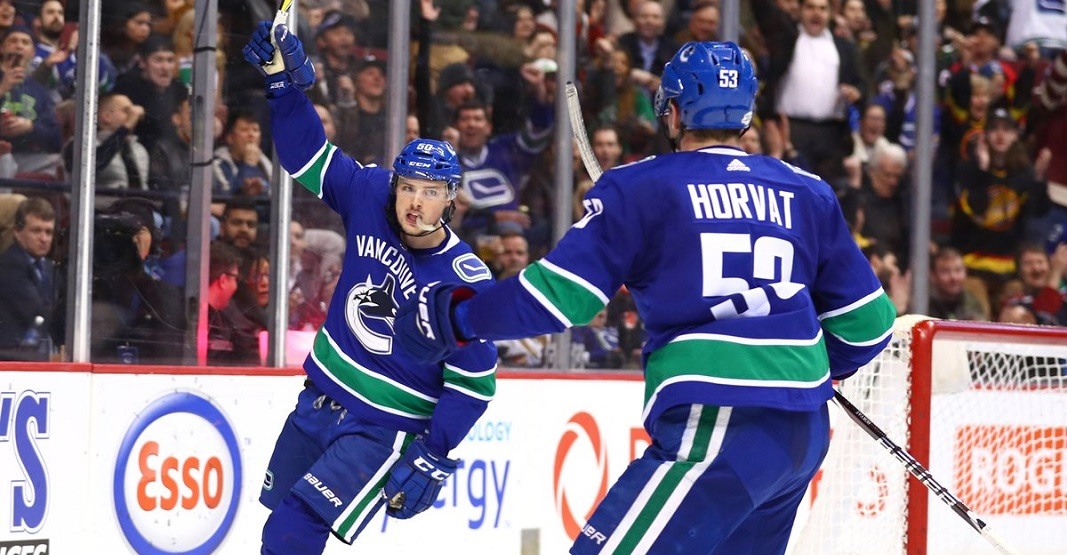 Do you believe in miracles?

If not, you should now.

I repeat – Gaunce scored TWO goals… like, in the same game.

Yes, Gaunce had a pair of goals (both scored off of his own stick) and Bo Horvat and Daniel Sedin also scored in a 4-2 win over the Chicago Blackhawks.

It was a good game, and a great night to have a good game, with Thursday being the annual Canucks For Kids Telethon night.

Brendan Gaunce is rewriting the scriptures.

Written deep in Canucks lore was the directive that Gaunce not score a normal goal.

For 108 NHL games, Gaunce was happy to oblige, scoring just three times, all in unusual fashion. But no longer.

Gaunced scored against the Hawks on Thursday – not off his ankle, not with a broken stick – but on a normal shot from his unbroken stick.

It was his first-ever goal scored at Rogers Arena, so the fans went wild.

Brendan Gaunce scored. Now everyone will try to be funny

When Gaunce picks his spot, you've got no chance as a goalie really

Gaunce with his 2nd goal of the game, gotta lock that guy up long term now before he gets too expensive pic.twitter.com/fOqkOM5FaA

Two goals in the same game for Gaunce, and both were scored on everyday hockey plays.

Once again: you can’t stop Brendan Gaunce. You can only hope to contain him. #Canucks

Brendan Gaunce has as many goals as Brock Boeser in 2018

#Canucks player of the month for February: Brendan Gaunce

With 5 career goals for the #Canucks, Gaunce has vaulted up the all-time list to 231st, tied with the likes of Goldobin, Boucher, Skille, Hordichuk, Lafayette, Rome

He even had a shot at the hat-trick with the Chicago net empty in the final minute.

“I’m not going to get many hat trick chances, so I fired the puck down there just in case!” – @BrendanGaunce16

A career game for #50 makes him Thursday’s SixPack Superstar. I can’t help but wonder though, what’s @GaunceCantScore going to do now?

I don’t know who this man is

The rivalry between the Canucks and Hawks certainly isn’t as fierce as it used to be.

Toews asked if Hawks vs #Canucks rivalry still exists. *has to check whiteboard in locker room to see Nux line-up* then says if Luongo, Kesler & Bieksa come back, maybe

The Canucks however, seemed to open the game with a chip on their shoulder. It was a fast-paced start to the game, and the Canucks had nine hits after 20 minutes of play.

And it wasn’t just the usual contestants laying the boom.

The Canucks began Thursday’s game against Chicago with a completely healthy lineup for the first time in months, but if you’ve been around this team long enough, you knew that wouldn’t last long.

The Canucks enjoyed about 10 minutes with a full roster before another player went down with an injury.

This time it was Sam Gagner catching the injury bug as he left with an upper body injury -sustained when he laid the hit above.

The Hawks were pressing late to try and tie the game when it was still 3-2, but Jacob Markstrom was up to the task.

He stopped 26 of 28 shots on the night, including nine in the final period to secure the win.

As mentioned in the intro, Thursday was the annual Canucks for Kids Fund Telethon.

This is always a great night. The Canucks always seem to play well, and the impact the event has on generating money for charities is astronomical.

And of course, the healthy scratches from the game always have some fun with it.

#CFKFTelethon phone lines are open now until midnight and you never know who might answer!

For tonight's @Canucks game, I will donate to @Canucksforkids:

-$20 for every goal scored by Boeser, Horvat, and Virtanen
-$10 for every assist by the same 3 players

Would any #Canucks fans care to match me? #CFKFTelethon

Many others were pledging tonight, can’t post them all but here’s a few:

What a game this turned out to be!

I wonder how much a Brendan Gaunce hat-trick would have been worth.