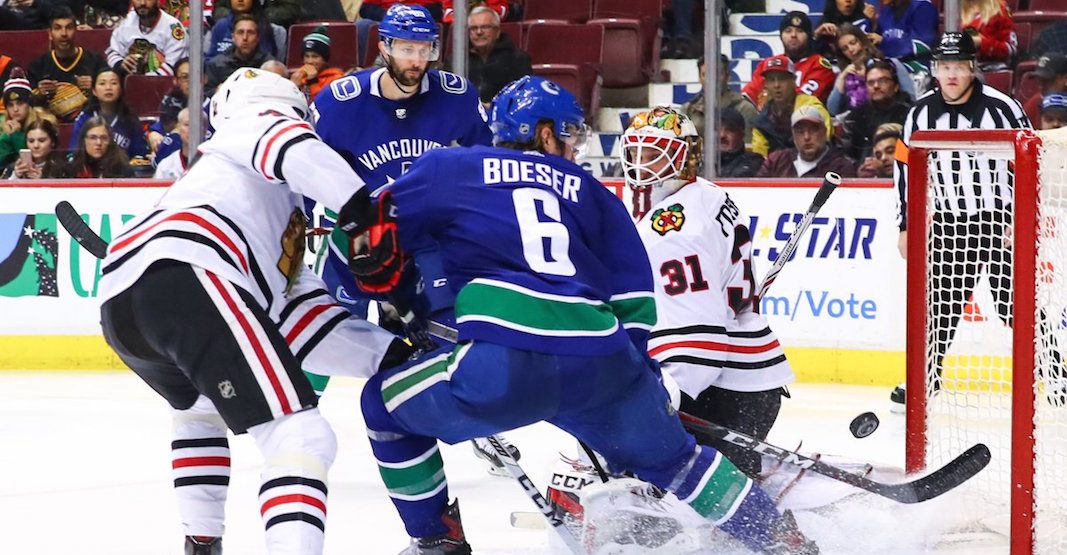 Those were the three players on the Vancouver Canucks “second line” on Thursday.

As it turned out, they were also the three stars of the night.

Vanek was in on all five of the Canucks goals in a 5-2 win over the Chicago Blackhawks, with Boeser and Gagner each picking up four points.

It was a particularly big night for Vanek and Boeser.

Vanek’s incredible game made him only the fourth Canuck in the past 20 years to record five points in a game.

Thomas Vanek is the fourth @Canucks player in the past 20 seasons to record at least five points in a game. #NHLStats #CHIvsVAN pic.twitter.com/TO83CVqWgT

Boeser now has a goal in eight of his last 10 games.

And he was this close to another one.

1.  The Vanek, Gagner, and Boeser show

Vanek-Gagner-Boeser. Nothing else mattered on Thursday.

The line combined for 12 points, with at least two of the three players being involved on every goal the Canucks scored in the game.

The first was a shot from Nikolay Goldobin that went off Gagner’s body, with the second assist to Vanek.

In the second period it was Vanek scoring, with both Boeser and Gagner getting the helpers.

In the third, all three players picked up a goal.

And the cherry on top, Boeser.

Brock Boeser scores after the ridiculous pass from Vanek

Markstrom’s 30 saves against Chicago on Thursday was probably the first good goaltending performance the Canucks have had since his shutout in Carolina on December 5 – over three weeks ago.

The last three weeks have given a glimpse of what the Canucks look like when the goalies don’t cover up the holes in the lineup. It can be ugly.

Things boiled over at Canucks practice on Wednesday, where Travis Green wasn’t too happy with Anders Nilsson.

Of course, not having Chris Tanev doesn’t make things any easier on the goalies.

Hopefully this effort from Markstrom helps get things back on track in that department, and Tanev looks set to rejoin the team next game.

Hutton, asked what Tanev adds to the line-up if he’s able to return tonight: “Everything.”

3. No place for Biega

It was a weird game for Alex Biega.

Despite being penciled in on the fourth line, Travis Green never put Biega out with regularity in this game.

He had just 4:50 of ice time, though he still managed to stir things up on the ice.

It’ll be interesting to see what happens with the Canucks defence going forward, because it can’t stay like this, and Tanev’s return complicates things even more.

It’s a good thing for Gagner that his line did so well tonight, because it made everybody forget about this.

the fallout of Sam Gagner playing the first 1:39 of a #Canucks PP pic.twitter.com/zJrgBHMaqZ

Yeah, they can laugh that one off.

A sadder thing than Boeser not getting his spot on the power play is the mere fact that Gagner is used in that spot to begin with. But that’s a rant for another SixPack.

The Gudbranson trade talk has been going on all season long, but it seems to have ramped up significantly in the last 24 hours thanks in part to an article from Iain MacIntyre.

It makes sense considering the Canucks will soon get Tanev back, and are already using Biega as a forward in order to avoid scratching Ben Hutton.

There’s a logjam, and moving Gudbranson is the logical solution.

It’s hard to pick one player from the Boeser-Vanek-Gagner line, so I’m going out of right field with the SixPack Superstar this time.

In the midst of trade rumours, Gudbranson had a noticeably good game. And I’m not just saying that to bump his trade value.

There should be no more Guddy slander on Canucks Twitter. We need to do our part. #GuddyTradeWatch

My biggest knack on Gudbranson’s game is that he often gets out of position, whether looking to finish a hit or for some other reason.

Regardless, it creates problems in the defensive zone. But I didn’t see it happening too often on Thursday.

Speaking of things I don’t see happening too often, how about this pass from Gudbranson?

If Gagner wasn’t taken down there it would’ve been a great scoring chance.

Though it didn’t result in a goal, it was refreshing to see Gudbranson set up a play like that.

Hopefully Dale Tallon saw it too.