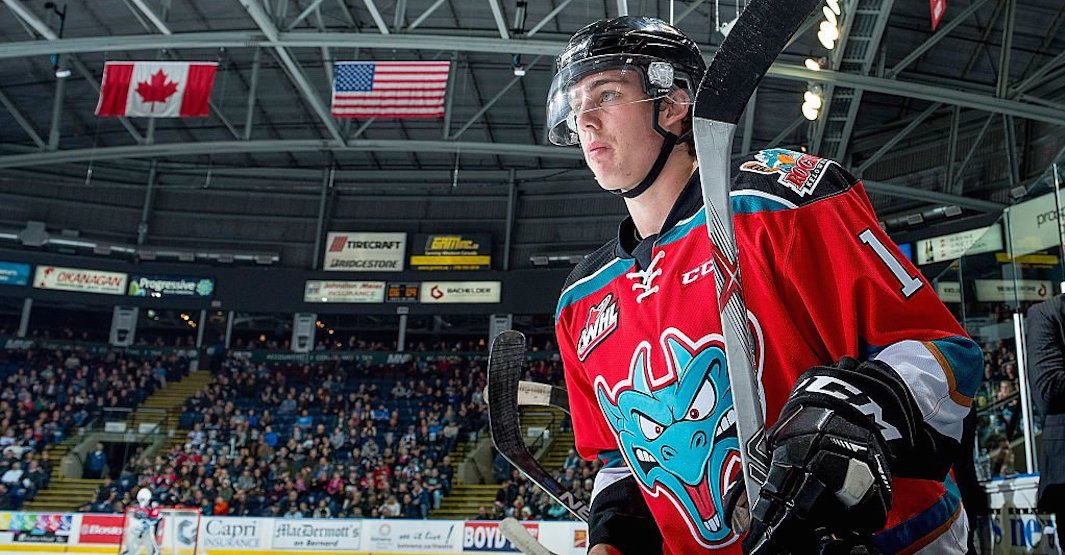 “Why isn’t anyone taking Kole Lind?”

That was the question cameras caught Vancouver Canucks general manager Jim Benning asking as teams passed on the forward from Shaunavan, Saskatchewan during the first round of the 2017 NHL Draft.

Benning took Lind with the first of two second-round picks, but the question has come up again – with a bit of a twist.

While four other Canucks prospects are representing their countries at the World Juniors in Buffalo – including Vancouver’s other second rounder Jonah Gadjovich, who was picked by Canada – Lind is back with his team in Kelowna.

This, despite an exceptional season by the 19-year-old, scoring 43 points (16-27-43) in 25 games. With the World Juniors snub behind him, he has his sights set on continuing to be one of the best point producers in the WHL.

With a shot like this, it’s no wonder he’s been so successful this season:

Being back in Kelowna so soon is not where Lind expected to be, but after being one of the final omissions from Canada’s World Junior team, he made the best of the situation.

After being cut, Lind exploded for six points in two games with the Rockets before the Christmas break.

“I wanted to go out there and prove myself and show what they were missing out there.” Lind told Daily Hive. “I think that’s how I’m going to try to play for the rest of the year. There’s always gonna be things that don’t work out your way and I think those are the things that keep [players] going and keep us wanting to get better.”

Missing out on Team Canada will motivate Lind to be better, just as narrowly missing out on becoming a first round draft pick did.

“I think every hockey player wants to be a first rounder in the NHL,” said Lind. “But that’s something that I can play with a bit of a chip on my shoulder for. People not thinking I’m good enough or what-not.”

The 33rd overall pick in the 2017 draft more than doubled his offensive output in his 18-year-old season, and it looks like he’s taken his game up another notch this year.

Lind leads all Rockets players with 43 points in only 25 games. That’s four more points (in two fewer games) than Dillon Dube, who was named Canada’s captain this year at the World Juniors.

That puts him 22nd in WHL scoring, despite missing six games dealing with mononucleosis.

His offensive totals look even more impressive when sorting by points-per-game.

Looking at how his pace holds up against the top players in other Canadian major junior leagues was extremely favourable.

Each league had only one player scoring at a higher point-per-game rate: St. Louis Blues prospect Jordan Kyrou (1.93) from the OHL, and undrafted Alex Barre-Boulet (1.87) in the QMJHL.

So how has he been able to do it?

“I think my hockey IQ and just my smarts are probably the best thing about my game. I’m able to react quickly to different scenarios and just find a way to be around the puck or be in a deadly position no matter what.”

Lind’s ability to be a dual threat by either feeding his linemates or finishing off plays for himself has also allowed him to excel this season, something he credits as another big key to his game.

“I’m not really a goal scorer or playmaker – I like to do both,” Lind said. “I’m not a selfish guy that’ll shoot the puck all the time or a guy that’s too un-selfish that he doesn’t shoot at all. I’m kind of in between the two.”

It seems Lind has developed tools that can help him succeed at the next level, but the work isn’t over. The next step, Lind says, is to add the size and strength needed to compete in the NHL.

“I think most young players say the same thing and I think they know what’s expected [based on] the feedback their NHL teams give them,” the 6-foot-1, 178-pound winger said. “So I’m just trying to get bigger and better every single day. Playing at the next level I’m going to be facing up against men and guys that are in a lot better shape than some guys that play in the WHL.

“I want to be one of the bigger and stronger guys in that league.”

Prospects are always hard to project until they get to the pro level, but Lind is on the right track to being a player teams will regret not drafting.

With his skill level and work ethic, he seems to have what it takes to make you really wonder – why wasn’t anyone taking Kole Lind?