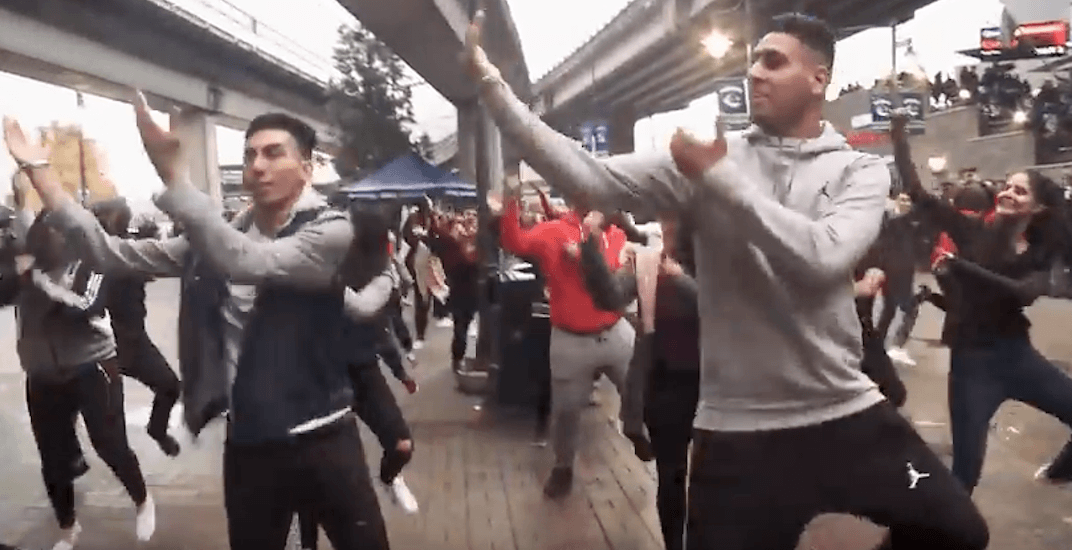 It starts before the puck is even dropped.

I’m talking of course about the four o’clock start time that accompanies the Leafs, assuring that the folks back in Toronto get to bed at a decent hour. While nobody really cares about starting three hours earlier than normal, Vancouverites will be damned if they be happy about special treatment for Toronto.

But lost in all of this was the benefit the early start time had for pre-game flash mobs.

Before the Canucks-Leafs game on December 2, over 100 students from Simon Fraser and Kwantlen Polytechnic University joined in a Bhangra flash mob on the concourse outside of Rogers Arena. Because of the early start, they were able to complete the dance in the light.

The dancers in the video are students enrolled in first-year university courses – CA 120 (SFU) and LANC 1870 (Kwantlen) – focusing on Bhangra. The instructors of the respective courses, Gurp Sian and Rayman Bhuller, also represent the South Asian Arts organization.

“Two cultural centerpieces for the South Asian community in Greater Vancouver are Bhangra and hockey,” said Sian, who also works on the Punjabi Hockey Night in Canada broadcast. “Vancouver is considered the Mecca of Bhangra dance outside of India.

“We thought it would be a perfect way to close out the semester for these students by connecting Bhangra and hockey.”