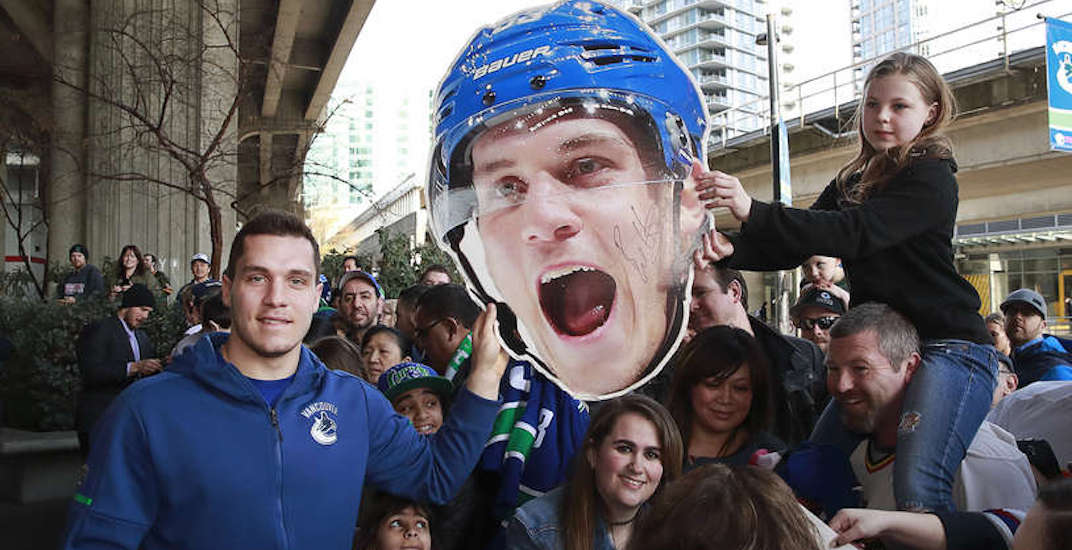 The Vancouver Canucks are starting off the 2018-19 season with a bang.

For their season opener against the Calgary Flames on Wednesday, not only are they giving out free beer (a promotion that never disappoints those who are 19+), they’re doing some other unconventional things.

All fans in attendance will receive a complimentary choice of Budweiser, American Vintage Barely Sweet Ice Tea, Pepsi, or bottled water upon entry. When you’re finished that, there are extended happy hour food and drink specials from 5:30 to 6:30 pm.

The first 4,000 fans to arrive along the glass for warmup, beginning 30 minutes before game time, will receive a ‘big head’ of either Bo Horvat, Brock Boeser, Sven Baertschi, or Troy Stecher.

We can’t tell if @SvenBaertschi loves the gif station or not… pic.twitter.com/LtjsuOotSi

There are new prize cannons this year, and they sound intense. The Canucks say they can launch 60 t-shirts in 10 seconds.

With a new season comes a new pre-game show. The pre-game ceremony will include player introductions as well as a new opening video and light show, all enhanced by a new sound system.

New menu items are ready to go. Lobster poke makes its debut, and if that’s too bougie for you, there’s a new bacon stand for the first time. You can also get fancy new ice cream sundaes, like tropical coconut and salted caramel.

The party on the plaza is back, featuring live music, alumni autographs, and face painting stations outside the arena before the game. Post-game, Canucks players will be giving away their game-worn jersey to lucky select fans.

All that’s left is for the Canucks to put on a show on the ice… No pressure, guys.