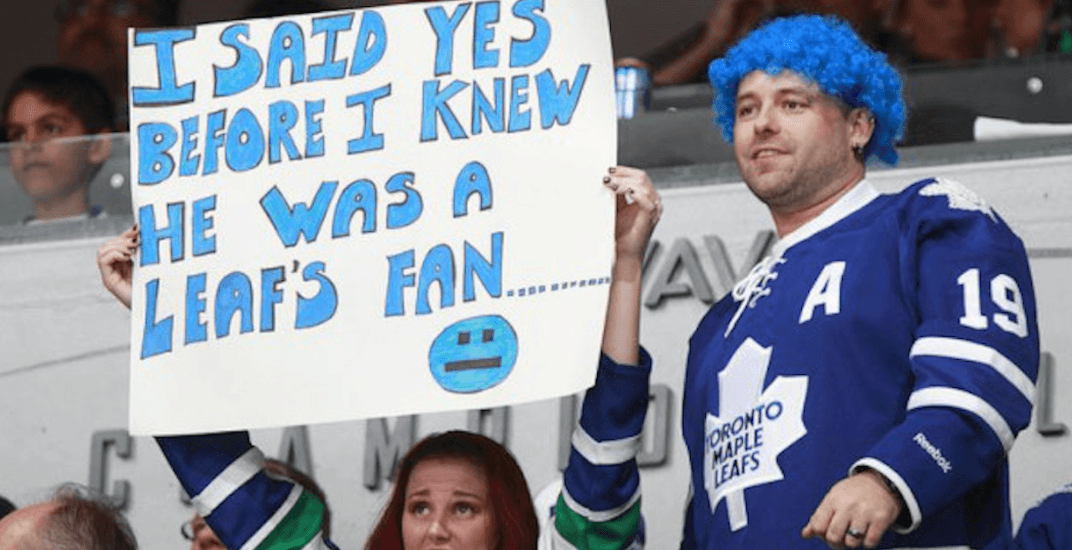 I’m going to let you in on a little secret.

The Vancouver Canucks play a lot of games on Saturdays, but only once a year does it start at 4 pm. That usually coincides with the Toronto Maple Leafs’ lone visit to town, greeted with vitriol from fans on the west coast.

Rearranging anything for Toronto doesn’t go over well with most people in Western Canada, and that’s particularly true for Canucks fans in Vancouver.

And you can understand why. An original six team playing in the largest market in Canada, the Maple Leafs are often given top billing, even in Vancouver. That’s a fact of life when every national television outlet is based in the centre of the universe.

People in Vancouver feel like they get force-fed everything Toronto-related.

Who do you think TSN’s SC with Jay and Dan led with on Thursday night? An all-Canadian matchup between the Canadiens and Flames in Calgary? No, of course not. They began the show with the Leafs-Sharks matchup from San Jose, a game which had not yet completed.

So when the Leafs come to town and the game time is shifted to four o’clock from the usual 7 pm puck drop for fans back east, Canucks Nation will always complain loudly.

This has been going on for a while…

HNIC boss Scott Moore joins Pratt and Ball to discuss WHY the Leafs get a 4:00 start IN Vancouver on October 24th..

Eat poop Leafs. Making Vancouver watch their team at 4:00. Weird how there is a province west of the GTA. http://t.co/x92yFm1O

Of course the leafs game is at 4:00 in Vancouver. Gotta make sure precious baby Matthews and Marner are in bed before 9:00

The funny thing is, and this is the secret I was going to tell you, NOBODY CARES!

As upset as Canucks fans get about 4 pm starts, the vast majority of them don’t really care. And many, like me, actually like them.

For the first time in 12 years, the Maple Leafs’ visit to Vancouver isn’t on Hockey Night in Canada. This time it’s the Montreal Canadiens who have arrived in town, and will get the four o’clock treatment on Saturday.

Sure, depending on your situation, a 4 pm start might not work well, but taking Toronto out of the equation makes it a lot more palatable. As such, West Coasters aren’t as salty about it.

If you ask me, 4 pm start times are great on weekends. I’d love to see more of them.

For fans in attendance, you’ll have plenty of time to go out afterwards. It’ll end at about 6:30, allowing everyone at Rogers Arena to spill out into the neighbouring restaurants for dinner.

And if you’re at home, you get to see the Canucks get top national billing for once. The focus of the entire country is on the early game on Hockey Night in Canada, so you get the pre-game show focus and everything.

I mean, Don Cherry will still talk about whatever he’s going to talk about, but you take what you can get!

So not only should you tolerate Saturday’s start time, you should embrace it, because there is a far bigger hardship in our future.

The Maple Leafs visit on March 6 this season, and check the start time:

Yes, fans are going to be asked to make it downtown for 6 pm on a weekday. Outside of the Conference Final and Stanley Cup Final when the NHL takes control of game times, this is unprecedented in Vancouver.

You’ll have no time to go for dinner before the game as you fight rush hour to get to Rogers Arena. Many fans will have to get off work early, particularly if their journey to the game involves any sort of a commute.

It’s an inconvenience for many people – far worse than the 4 pm Saturday game.