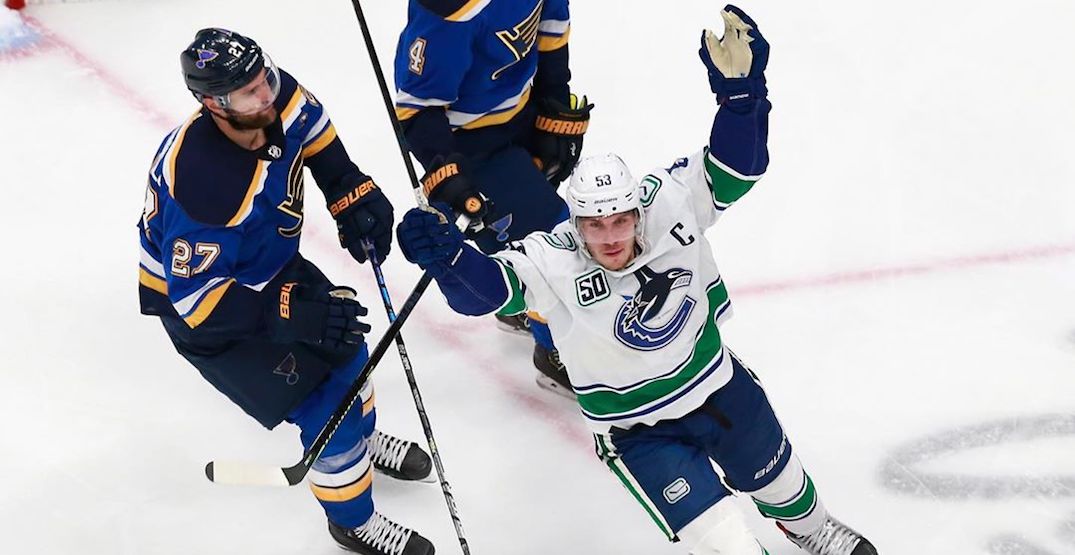 It’s been quite the last 12 months for Bo Horvat.

Although it feels like a lifetime ago, the ninth overall selection in the 2013 draft was named captain of the Vancouver Canucks on October 9 prior to puck drop against the Los Angeles Kings.

He registered 53 points in 69 before the season paused on March 12.

While the season was on pause, Horvat’s wife Holly gave birth to their first child, Gunnar, on June 28.

Best day of my life ! Welcome to the family Gunnar John Horvat ❤️ we are so lucky to have you in our lives

Now, back in the bubble, the captain has been an absolute leader for this young, energetic Canucks team with six goals and eight points in six games. He’s scored crucial goals, and his MVP-like presence has alleviated pressure from Quinn Hughes, Elias Pettersson, and Brock Boeser as well.

(Not that those three need any pressure alleviated with a combined 22 points in 18 games, but I digress).

It’s clear Horvat is playing the best hockey of his life right now. Whether he’s hitting his prime, activating dad mode, or both, it’s been a joy for fans to watch the captain come into his own.

So, continue to enjoy watching Horvat flourish by enjoying these seven “monster” moments again below.

1. He’s a menace on the power play

Horvat’s success on the power play has been a pleasant carryover from the regular season. He cemented himself as the trigger man in the slot on the power play, in part helping the Canucks ice the fourth-best power play in the NHL this season.

Horvat himself had 12 power play goals on the season, which was tied with the likes of Auston Matthews and Nathan Mackinnon, among others.

So far in the postseason, he’s added a couple more power play markers as well.

Horvat with a perfect tip on Hughes' shot and the Wild are down 4-1 pic.twitter.com/yTUZVmILYx

The captain is a heads-up player in the offensive zone, as shown by his tip-in goal above.

He’s also pretty good as the trigger man too.

2. Stepping up in the rush

While Horvat is lauded as a two-way shutdown center, he’s managed to garner his fair share of opportunities on odd-man rushes in the postseason.

Miller finds Horvat on the 2-on-1 but Stalock is able to reach back and get it with the glove. #Canucks #mnwild pic.twitter.com/1kofjox1i7

And to think, if Minnesota Wild goaltender Alex Stalock doesn’t make this save, the Canucks captain could have SEVEN goals in six games.

3. Setting up his teammates on the rush as well

This was another near miss on the scoresheet for Horvat.

Great setup by Horvat but Pearson just can't convert on the 2-on-1. #Canucks #STLBlues pic.twitter.com/82elZ0DBY3

If it weren’t for a couple near misses and/or great saves by the opposing goaltender, Horvat could very well be leading the entire NHL in postseason points.

This goal feels like a long time ago now, but it’s easy to forget that the Rodney, Ontario native scored the tying goal late in Game 4 against the Wild.

Little did we know, that was merely the beginning of Horvat’s clutch goal-scoring streak.

5. Against St. Louis, the dangles began to shine

Who felt worse after Game 1: Jordan Binnington or Vince Dunn?

Binnington surely didn’t have a great night, but Dunn was absolutely annihilated by Horvat’s dekes prior to this beautiful tally.

And one more look, just for good measure.

It’s hard to believe that less than 48 hours later, the captain was able to score a goal that was arguably even prettier than his one the game before.

Even though Horvat’s name had already been trending on social media after multiple jaw-dropping tallies, the clutch nature of this goal cannot be underestimated.

The Canucks were in a situation against the Blues where four things were working against them:

1) Tyler Myers had left the game with an injury.

2) The Canucks were not getting any help from the refs.

3) The Blues were dominating at five-on-five

4) St. Louis carried the momentum into overtime with the tying marker.

Even with all of that working against them, Horvat (and Hughes) pulled this off.

Don't sleep on the Hughes pass to set up Horvat – it was as nice as the goal! pic.twitter.com/xFr4PXDn5T

Just to cap it off, Horvat recently passed Pavel Bure for the most goals by any Canucks player in their first 12 playoff games with the team.

Coming up huge once again for the @Canucks tonight, Bo Horvat has made the most of his 1st playoff appearances since 2015 as he's scored 6 times in just 6 games to give him the most goals here (among players to suit up with VAN early on in their #StanleyCup Playoff careers) pic.twitter.com/KxAl2BrfzG

Anytime you pass Bure on an all-time Canucks list, you’re doing something right.

Even former Canuck Cliff Ronning was getting in on the Bure/Horvat action.

Holy HORVAT that goal reminded me of a guy named BURE ! pic.twitter.com/oNShXlgmCC