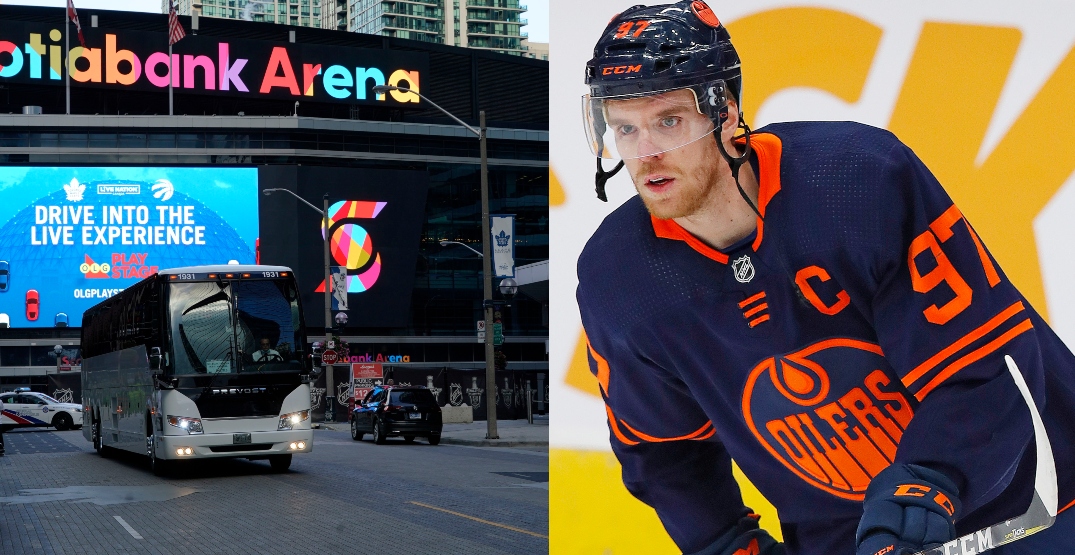 Cross-border travel isn’t as comfortable as usual for teams during the Stanley Cup Playoffs.

While much of the playoffs this year look and feel normal, the Edmonton Oilers and Toronto Maple Leafs are reportedly taking an abnormal route into the United States for road games.

Perhaps the Calgary Flames will as well.

It all has to do with COVID-19 testing requirements to enter the United States. Anyone currently entering the country must take a test if arriving by air. But for anyone driving across, no test is needed.

Worried that players could be lost due to a positive test, teams are choosing to drive across the border — despite the inconvenience that presents.

Rather than take the team’s private jet direct to Los Angeles, the Oilers are taking two planes and a bus to get to Southern California. The Oilers spent last night in Vancouver, according to TSN’s Darren Dreger. The plan is to bus into Washington state today before jumping on another plane to LA, where they’re playing Game 3 of their series against the Kings tomorrow.

Meanwhile, Dreger adds that Toronto Maple Leafs have taken the bus to Buffalo, which is where they’ll fly to Tampa for their game against the Lightning tomorrow night.

The Maple Leafs took a bus to Buffalo this morning and will fly to Tampa Bay from there. No word on the Calgary Flames travel plans to Dallas as both clubs prep for game 2. https://t.co/jL0HeyunzB

There had been reports of Canadian and American NHL teams pulling similar moves down the stretch of the regular season.

The NHL no longer conducts its own COVID-19 testing for players, coaches, and staff, as it did for most of the pandemic. Nearly every player in the league contracted COVID during the first Omicron wave last winter. It hasn’t been a major issue for the NHL since, though the worry now is that players will lose their immunity to the virus.