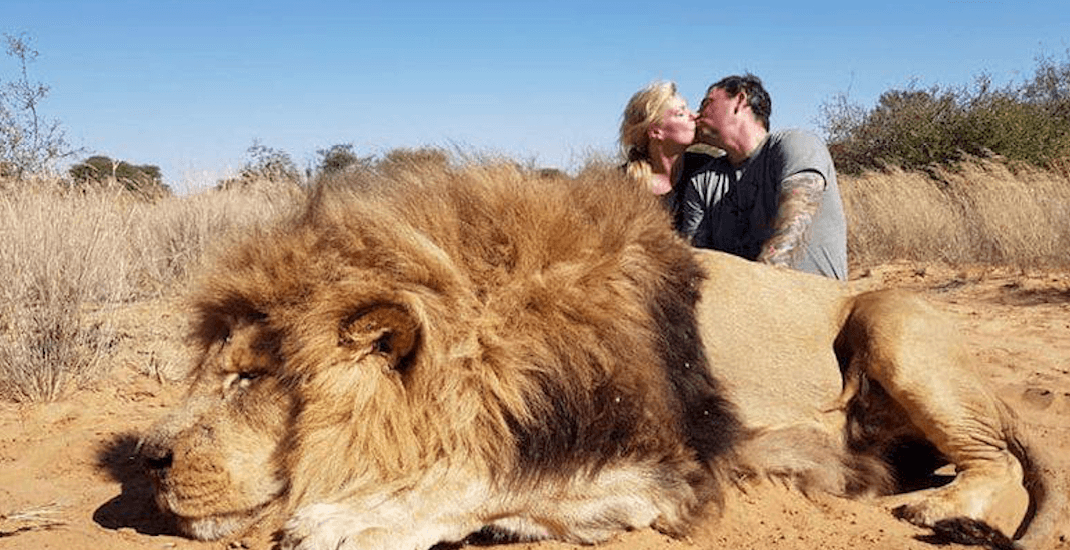 A Canadian couple is receiving backlash for kissing while posing with a dead lion on a hunting trip.

English online tabloid the Mirror first published a picture identifying the couple as Darren and Carolyn Carter from Edmonton, Alberta who took the photo while on a hunting trip in South Africa.

The Mirror used the picture in an article about its new campaign “calling for an end to the barbaric practice of trophy hunting.”

The picture was initially shared by Legelela Safaris on its Facebook. On its website, the company says it “conducts hunts all over South Africa, Zimbabwe, and Mozambique.”

The Mirror called the Carters a “sick couple” who enjoy posing “proudly with the animals they have slaughtered.”

The Carters — who also own a taxidermy company in Alberta — have come under harsh criticism for their picture which has been shared widely on social media.

Darren and Carolyn Carter. I hope this kiss makes you famous. pic.twitter.com/V2QUkZq5NB

I wish these scumbags (Darren and Carolyn Carter from #Edmonton) nothing but the most miserable future life ahead. Hopefully karma prevails and they end up as a lion’s dinner someday. 🦁 #BanTrophyHunting

Look at this majestic lion 😢 What joy did this Canadian couple get by shooting it. Utterly revolting #BanTrophyHunting 😭😭😭😭😭 pic.twitter.com/gKkgykf0uz

Canadian couple Darren and Carolyn Carter you both losers killing a Lion well you feel proud you moron this is an act of pure evil a big shame  you scumbags hope karma will bite you back and will end up lion’s dinner someday.#DarrenCarter  #CarolynCarter #trophyhunting pic.twitter.com/XethGO2nVT

Darren and Carolyn Carter from Canada hunted a big lion at Kalahari South African jungle safari and posted their kissing picture next to the body. A big shame 😡 pic.twitter.com/F0HSKi6EwF

Just when you think you’ve seen it all, Darren and Carolyn Carter take it to another level. Can’t believe this magnificent creature was bred purely for narcissists like them to achieve a ‘selfie’. Disgusting! And all involved should be made accountable for their sick actions.

The couple has since deactivated all of their social media accounts and their taxidermy website.