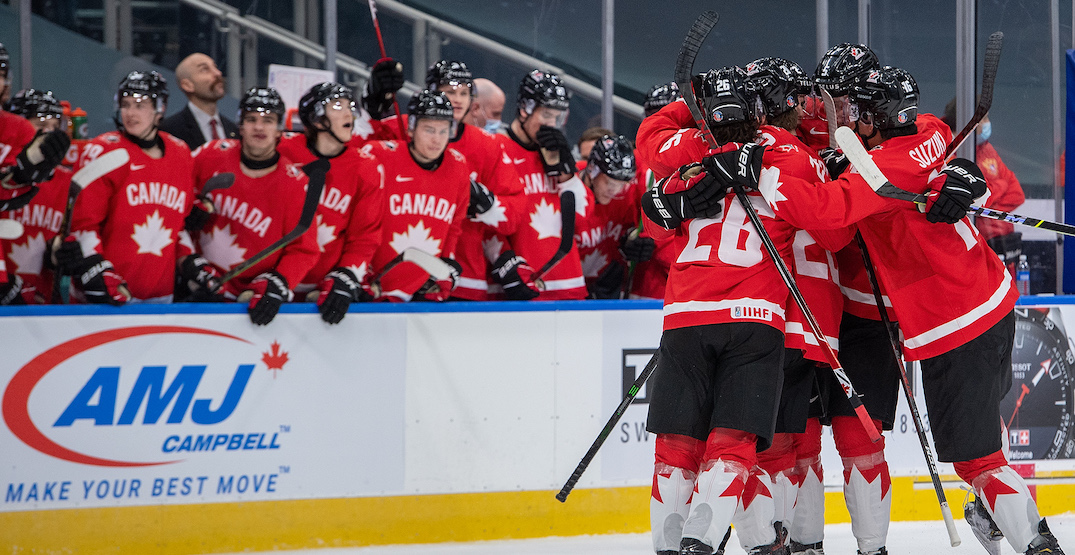 The Canadian World Junior team is one win away from claiming gold when they battle the United States tonight at Rogers Place in Edmonton (9:30 pm ET/6:30 pm PT on TSN).

Team Canada continued its dominant run with a 5-0 win over Russia in the semi-finals on Monday. That win increases Canada’s goal differential to an eye-popping 25-2 for the tournament.

This gold medal game will feature a matchup of the two top scorers in the tournament. Dylan Cozens for Canada and USA’s Trevor Zegras share the lead in points for the tournament with 16 each.

The Canadians also boasts four of the top 10 scorers in the tournament as Cozens is joined in the top 10 by Peyton Krebs, Connor McMichael, and Quinton Byfield.

The Americans got to the gold medal game by defeating Finland in their semi-final game. That game came down to the final minutes after Finland tied the game 3-3 on the power play with less than four minutes to go. However, the US answered with a goal by Arthur Kaliyev, which was enough to send them to the gold medal game.

Canada will be looking for its 19th gold medal of all-time, and it’s first back-to-back gold medals since a run of five straight gold medals from 2005 to 2009.

Meanwhile, Team USA will be gunning for its fifth all-time gold medal. The US has a medal at four of their last five tournaments (one gold, two silver, one bronze) but has not won gold since 2017. Canada has only captured three medals in that same span but has won two golds and one silver.

These North American rivals are very familiar with each other, having played 47 times against each other since 1977, with Canada winning 33 of those games. They faced each other in last year’s tournament in a game which saw Canada come out on top 6-4.

But in recent years, the Americans have held the advantage in finals since 2000, with USA winning the last three gold medal games against Canada.