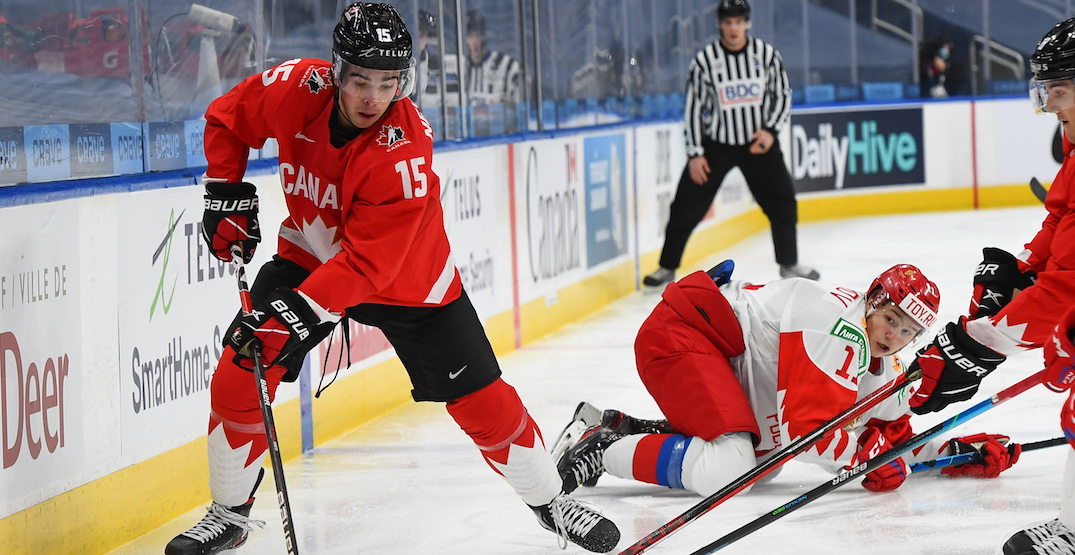 For the second straight year, Canada will play for gold at the World Junior Championship.

Canada defeated Russia 5-0 in their semi-final at Rogers Place in Edmonton, and will battle for gold against USA tomorrow.

Statistically, this is one of the most dominant Canadian teams ever at this tournament. They have outscored their opponents 41-4 and haven’t allowed a single goal while playing five-on-five.

Against Russia on Monday, the game played out similarly to many others in this tournament. Canada racked up an early lead, and then focused more on defence to shut down their opponent.

Alex Newhook returned to the lineup for the first time since getting injured in the game against Finland, and he wasted no time in making his presence felt.

In his first shift of the game, Newhook collected the puck in front and sniped it over the left shoulder of Yaroslav Askarov.

It wasn’t called a goal by the referee initially, but video replay revealed on the next whistle that it was clearly a good goal.

Later in the first, Canada padded their lead when Connor McMichael tapped in a perfect pass from Jakob Pelletier.

Askarov had a defenceman’s stick after losing his goalie stick on the play, something that seemed to happen several times throughout the game — including on Canada’s fourth goal scored by Braden Schneider.

Cole Perfetti scored the other goal for Canada, wiring a shot past Askarov on their first power play of the game.

Devon Levi continued his excellent tournament in this game with a 27-save shutout. He has yet to allow more than one goal in any game this tournament. Levi’s rise to become Canada’s starter despite having never played in the CHL is perhaps the best story of the World Juniors.

Russia appeared to score late in the second period but Canada challenged for offside and the goal was overturned.

After Russia scored their first goal, Canada challenges for offside and wins. The goal is removed and Canada still leads 4-0 #WorldJuniors pic.twitter.com/SL4eQ1z3kr

The players of the tournament were announced for each team after the game. Canada’s top three players were Levi, Cozens, and Bowen Byram.

Canada will take on USA in the gold medal at 9:30 pm ET/6:30 pm PT on Tuesday, on TSN. Finland will play Russia for bronze.