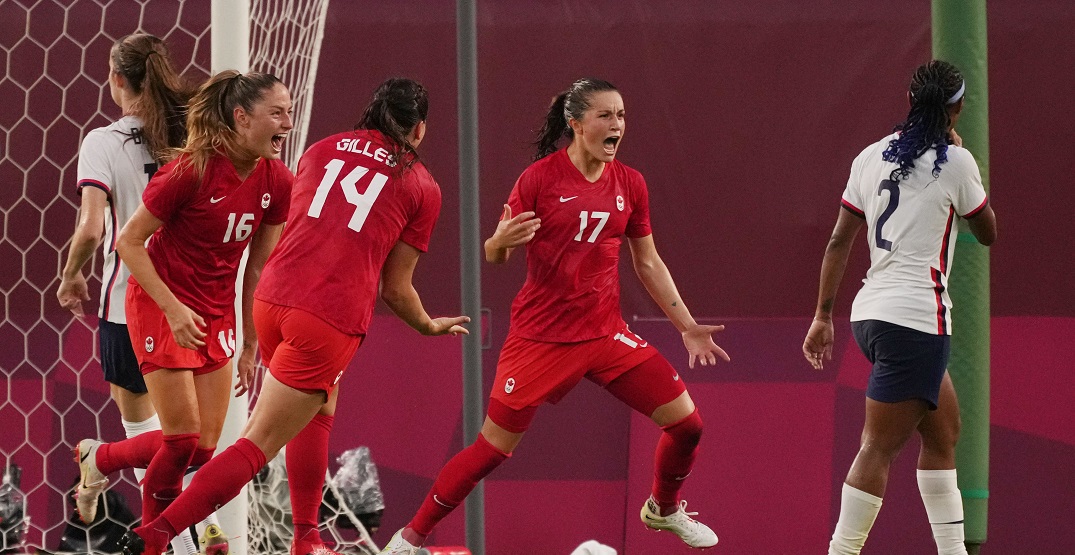 With a 1-0 win over the USA in Monday’s semifinal, Canada’s women’s soccer team might have finally exorcised the Olympic demons of 2012.

It’s also the first time Canada has beaten the United States in over 20 years.

And, of course, it was a late, perhaps controversial penalty, that helped the Canadians score the only goal of the match by the way of midfielder Jessie Fleming.

No matter for Fleming, however, as she slotted a powerful strike past USA keeper Adrianna Franch for the biggest goal of her life in the 75th minute.

A PK by the London, Ont. native puts Canada up 1-0 over the USA

Fleming’s penalty was only awarded after going to the Video Assistant Referee (VAR), where it was determined that Canada’s Deanne Rose was interfered with by American Tierna Davidson.

These two teams last met at the Olympics back in London in 2012, where Canada fell 4-3 in the semifinal despite a Sinclair hat trick.

With the USA down 3-2 in that contest, a call on Canadian goalie Erin McLeod for the rarely called offence of holding onto the ball too long inside her crease led to an Abby Wambach 80th minute free kick equalizer.

Alex Morgan then won the match for the Americans in extra time, who went on to win the gold medal.

Advancing to the final guarantees the Canadian team their third straight medal at the Olympics, having won bronze twice in both the London and Rio Olympics.

Meanwhile, the Americans have won four gold medals and one silver medal since women’s soccer was introduced to the Olympics in 1996, but will not be advancing to the final for a second consecutive Olympics.

In the gold medal game, Canada will play Sweden, who topped Australia 1-0. The final is set for Thursday, August 5 at 10 pm ET/7 pm PT.