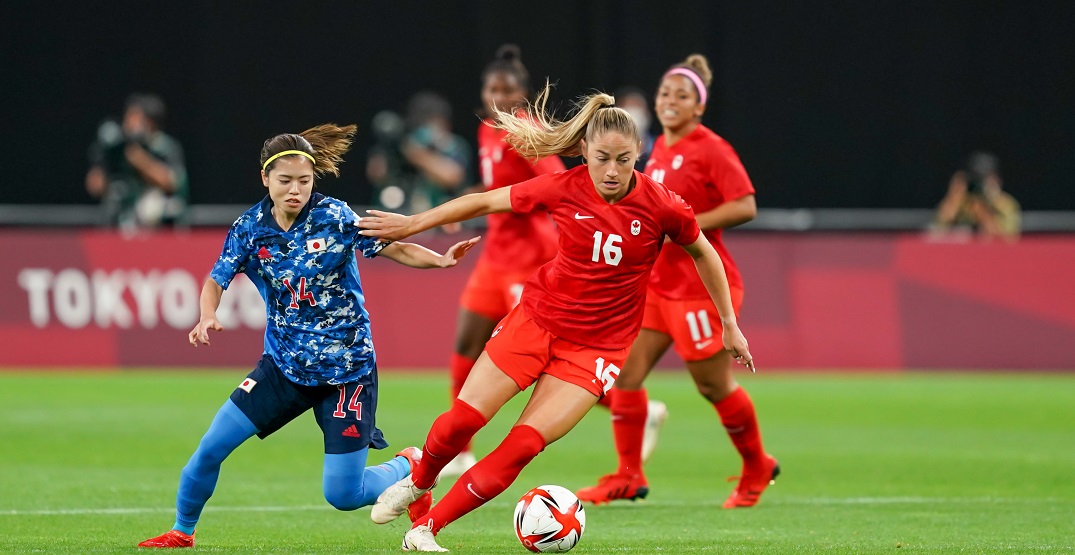 The script was so close for a fairy-tale start to the Tokyo 2020 Olympics for Canada and its national women’s soccer team.

But after a whirlwind contest that featured an early Canadian goal, a saved penalty, and a disallowed goal for offside, the score after 90 minutes (plus eight minutes of added time) read: Japan 1, Canada 1.

Playing out of Tokyo’s Sapporo Dome on Wednesday, Canada couldn’t quite hold on and upset the host Japan in both countries’ first soccer match of the Olympics.

In her 300th match for Canada, national team legend Christine Sinclair opened the scoring just over five minutes into the match, potting in her own rebound after initially hitting the post.

Despite falling behind early, Japan largely looked like the better team throughout much of the match.

A collision in the box for Canadian goaltender Stephanie Labbe brought three kinds of trouble: a yellow card, and injury, and an impending penalty shot in the 54th minute.

Labbe dealt with the penalty taken by Japanese forward Mina Tanaka, saving what was admittedly not the strongest effort.

After being down for an extended period of time with an injury, Labbe comes up big for Canada #Tokyo2020

But Labbe soon ended up exiting the game with the injury, being replaced by Kailen Sheridan in the 58th minute.

Moments after the penalty save, Canada’s Janine Beckie appeared to put her side up 2-0 — but the goal was immediately called back due to offside.

Though Beckie’s goal, if counted, could’ve probably put the game to bed, Canada wasn’t able to hang onto their lone marker and Mana Iwabuchi equalized for Japan in the game’s 84th minute.

Sinclair’s goal ended up actually being Canada’s only registered shot on target.

Canada’s next match in Group E action comes this Saturday, as they play Chile at 3:30 am ET/12:30 PT. They’ll close off the opening round on Tuesday, July 27 against Great Britain.

The opening ceremonies for the Tokyo 2020 Summer Olympic Games take place this Friday, July 23 at 7 am ET/4 am PT.