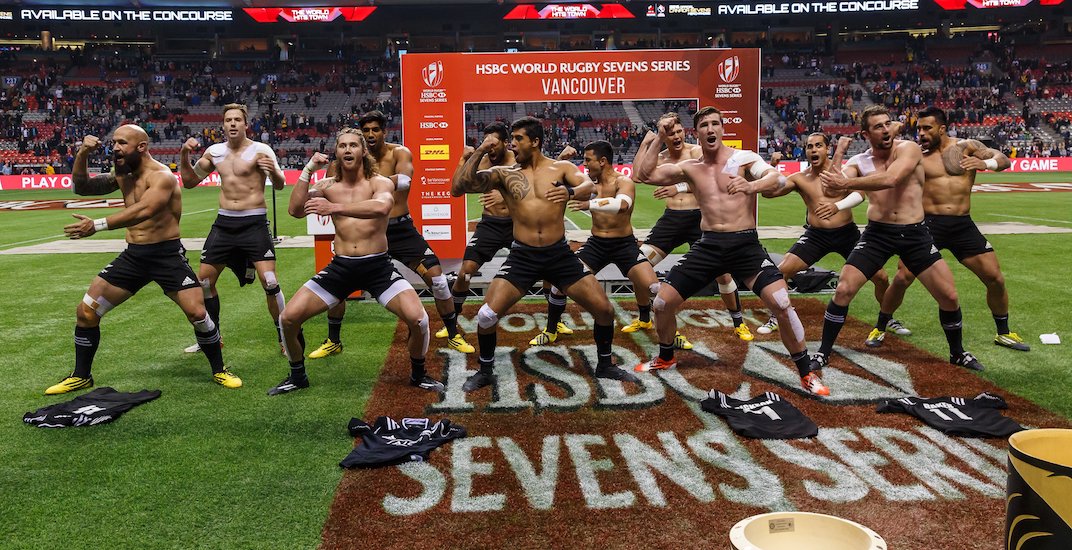 This weekend will see BC Place celebrate the five-year anniversary of the Canada Sevens. The rugby tournament that began as a dream has blossomed into Vancouver’s unofficial spring awakening and one of the most prestigious events in the World Sevens Series calendar.

“I think it’s one of the top three stops on the circuit,” insists World Rugby’s Sean Maloney. The iconic Australian rugby personality has commentated at every Canada Sevens tournament to date and spends his years travelling the globe broadcasting from every stop on the World Sevens Series circuit.

“Cape Town is special because it’s in a part of the world where rugby means everything. And Hong Kong is still Hong Kong. But Vancouver’s right up there! You get good footy because of the conditions under the roof and the fans cut loose, which is what it’s all about.”

There’ll be more memories after this weekend’s tournament, which has the extra spice of being a precursor to the Olympics in Tokyo this July.

“Of course every team wants to win the World Sevens Series,” explains Maloney, “but a gold medal is the focus of everyone’s plans. Everything is built up to be ready for July. The Coronavirus has forced the postponement of the Singapore and Hong Kong tournaments until after the Olympics. That’s turned teams’ plans on their heads.”

Expect the unexpected this weekend. It’s all to play for at BC Place.

To celebrate five glorious years of tries, tackles and countless costumes, with a little expert help from Maloney, here are five unforgettable memories from Canada Sevens.

One of the great elements of Sevens tournaments is that teams don’t stop competing once they’re eliminated from Cup contention. Additional Series points for placings on the final day – punctuated by Shield, Bowl and Plate trophies – ensure that battles don’t stop raging.

The very first tournament at BC Place in 2016 was a classic. And though New Zealand celebrated their Cup victory with a shirtless Haka the absolute highlight of the weekend was a remarkable Canadian come-from-behind victory in the Bowl Final against France.

“That’s all you ever want, for the home team to win their final game,” recalls Maloney, whose inspired commentary captured the emotion in the stadium perfectly.

“It was the most ridiculous Sevens game I think I’ve seen. John Moonlight scored the winning try but the way the final minutes played out were nuts. That helped set the tone for the next few years. Everyone went away thinking, we’re in with a shot next time. It was incredible that that was the city’s first taste of hosting the event. Mate, it was raucous in the stadium.”

If Canada can’t take their hometown Cup, it’s only fitting that Fiji lift the trophy. The island nation that plays Sevens with a blend of Harlem Globetrotter trickery and homicidal mania deservedly triumphed in 2018 but as Maloney correctly points out, Fijians aren’t only triumphing on the field.

“Since coming to Vancouver I’ve learned that a lot of Fijians live in Alberta,” he explains. “It’s always incredible to see the numbers of Fijians that make the 10-hour bus trip to Vancouver. That takes a huge level of commitment!”

The Canada Sevens has been graced by a few celebrity visits over the years but none compared to the appearance of man-mountain dreamboat Jason Momoa at the 2019 Tournament.

Unashamedly wearing his passion for the New Zealand All Blacks on his sleeve (and the rest of his impressive torso) Aquaman’s relentless positivity rubbed off on the entire stadium.

4. The Eagles have landed

It’s not like Vancouverites to cheer for USA, but you had to tip your hat to the yanks as they turned over New Zealand 17-0 in the 2018 Cup Quarterfinals, highlighted by this searing moment of speed from Carlin Isles, the world’s fastest rugby player.

In case you were wondering, Isles’ best 100-metre time of 10:13 seconds would have been good enough to reach the semi-finals at the last Olympics. He’s quick.

“The crowd isn’t just ex-pats from rugby hotspots,” insists Maloney. “I notice a lot of Canadians too. They’ve bought in too. That’s what it’s all about.”

The myriad of spectacular costumes that have graced BC Place every March has proven this to be true. Vancouverites’ passion for dressing up and partying hard makes a mockery of our No Fun City reputation. Everyone has their personal favourites, but this group of pristinely attired Gord Downies from 2019, a year and a half after the singer’s passing, was a uniquely Canadian tribute to the great man.