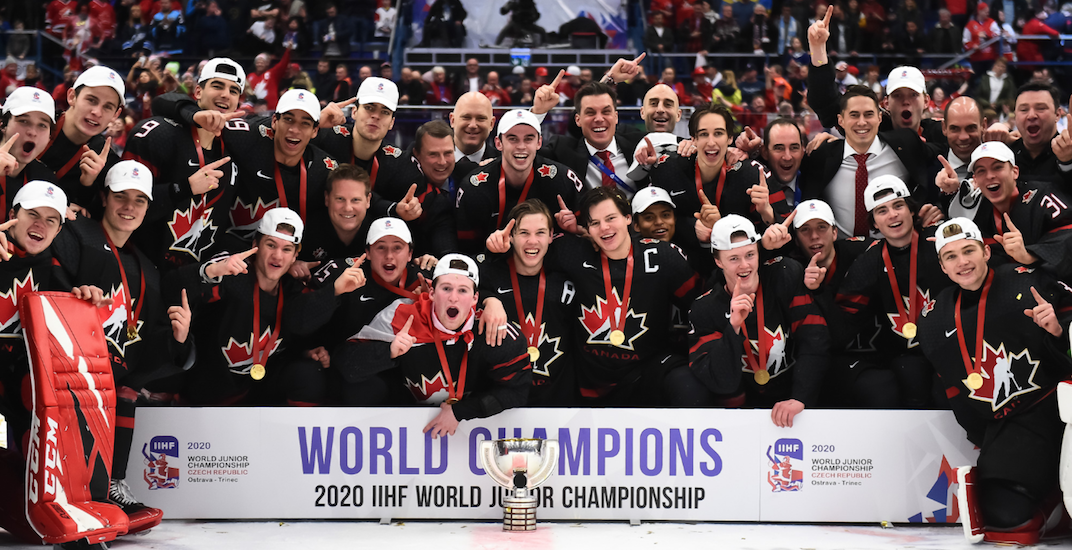 Canada has won gold at the 2020 IIHF World Junior Championship, coming from behind to beat Russia 4-3 in a wild final game on Sunday.

"World champion and winner of the gold medal of the 2020 IIHF World Junior Championship… is Team Canada!" 🇨🇦 pic.twitter.com/UPiw4Q0Lw9

With the game tied 3-3 in the final minutes, Akil Thomas was the unlikely hero for Canada, saving his first goal of the tournament for the best possible moment.

A regulation win for Canada seemed unlikely when they were down 3-1 with just over 10 minutes remaining, but they dug their way out of the hole.

Just 34 seconds after Russia had taken a two-goal lead, Canada got some luck as Caden Addison’s pass deflected off Connor McMichael’s back skate and into the net.

A mere two minutes later, it was Canada’s captain Barrett Hayton — playing hurt with a shoulder injury — with a perfect shot on the power play to tie the game.

Goal stands after review, and Connor McMichael has 🇨🇦 back within one! pic.twitter.com/ymfajEtGtH

THE CAPTAIN COMES THROUGH! Barrett Hayton ties it for 🇨🇦! pic.twitter.com/xuM8cfReEX

Hayton was ruled a game-time decision and seemed unlikely to play, but he ultimately suited up and made a big impact in the contest. He finished the tournament with a team-high 12 points.

Joel Hofer was exceptional in goal when called upon all tournament for Canada, and he was great again on Sunday, making 35 saves to keep Canada in the game until their third period comeback.

For his efforts, Hofer was named the best goaltender of the tournament. Teammate Alexis Lafreniere was awarded best forward, while best defenceman went to Sweden’s Rasmus Sandin.

Canada was well-represented in the media-selected All-Star team as well, with Hofer, Hayton, and Lafreniere taking up three of the six spots.

This marks the 18th time Canada has won gold at the World Juniors, and the eighth in the last 16 years. It’s their first gold medal on European soil since 2008.

It’s a bit of a redemption story for this Canadian team, who suffered their worst-ever loss at the World Juniors earlier in the tournament, 6-0 to this very same Russian team.

That loss seemed to serve as a wake-up call for Canada, who outscored their opponents 26-7  in the rest of the tournament en route to the gold medal.