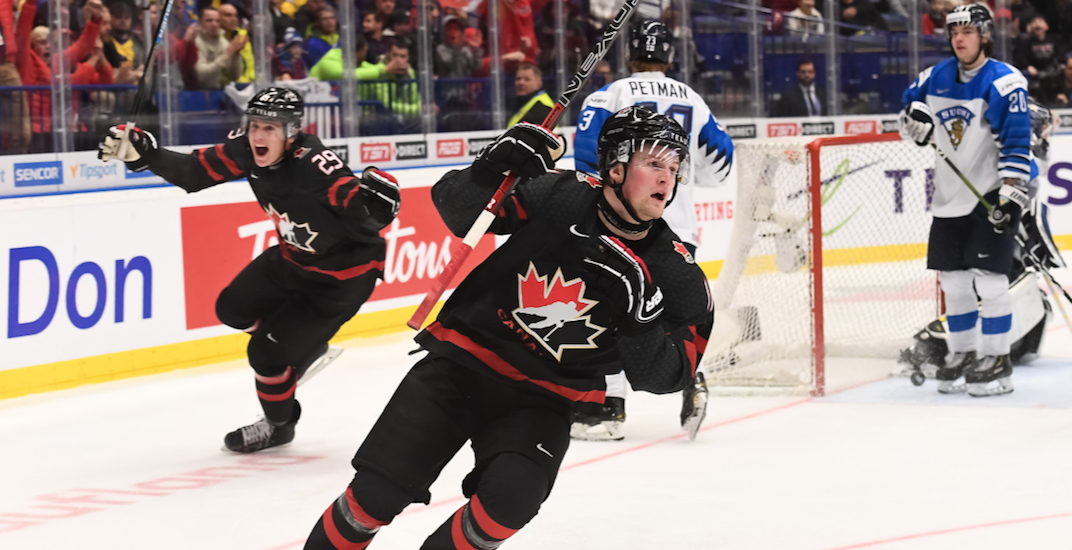 Canada will play for gold for the third time in four years at the World Junior Championship, after a dominant 5-0 semi-final win over Finland.

Team Canada jumped on the Finns early, scoring three times in the first four minutes of the game with goals from Connor McMichael, Alexis Lafreniere, and Jamie Drysdale.

GOAL! 🇨🇦 takes the early lead less than 2 minutes into the game with a shot up top from @con91mcmichael … 1-0 @HC_WJC #WorldJuniors pic.twitter.com/B1QzxKKfjN

How happy are 🇨🇦 fans to have Alexis Lafreniere in the lineup? Check out this beauty of a backhand that give @HC_WJC the 2-0 lead. #WorldJuniors pic.twitter.com/ykDdH2R67n

3 🇨🇦 GOALS in 3 minutes and 55 seconds…😮😮 This one coming from Jamie Drysdale!

To say @HC_WJC is having a great start would be the understatement of the year. #WorldJuniors pic.twitter.com/ibfGsZSaOw

Ty Dellandrea scored before the end of the first period to give Canada a commanding 4-0 lead after 20 minutes. Lafreniere also added another goal for Canada on a second period power play.

Despite the lopsided score, Canadian goaltender Joel Hofer was excellent, making 34 saves for the shutout — including a number of difficult first period saves to keep the lead comfortable.

This win served as revenge for Canada, who lost to Finland in the quarter-finals at last year’s tournament.

It wasn’t all good news for Canada though, as they lost captain Barrett Hayton to an injury after he fell into the end boards. Hayton, who had two assists in the game, left the ice and his status for the gold medal game is up in the air.

Canada will play Russia for gold on Sunday (1 pm ET / 10 am PT on TSN), after the Russians beat Sweden 5-4 in overtime in the other semi-final.

Russia handed Canada their most lopsided loss in the history of this tournament just last week, winning 6-0 during the preliminary round. Canada has been unstoppable since then, beating Germany, the Czech Republic, Slovakia, and Finland by a combined score of 22-4.