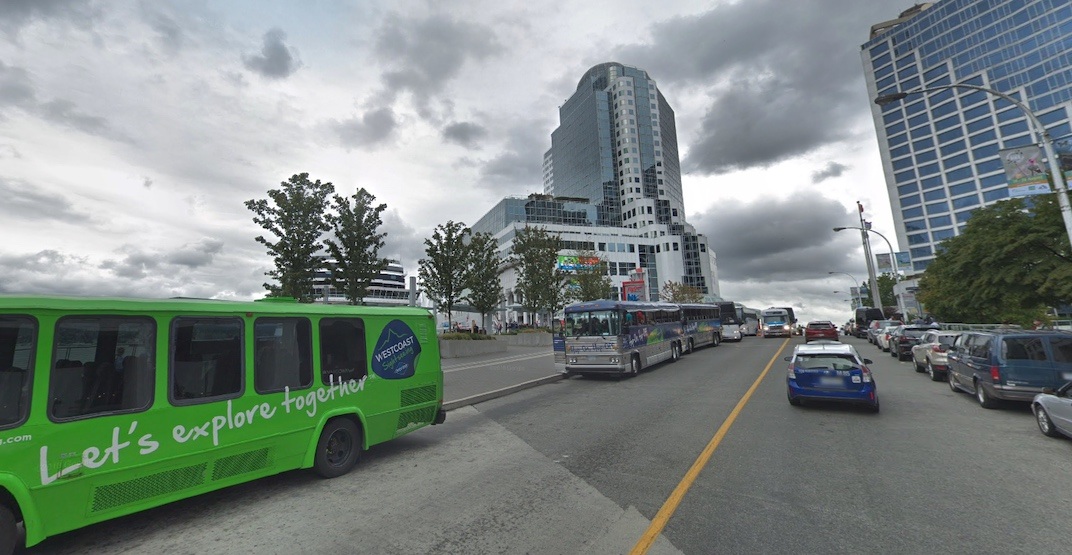 According to a city staff report, over 200 bus parking stops have been observed during peak days along the curbside drop-off zone along Canada Place, and this has resulted in several occasions where tour bus parking demand exceeded the tour bus zone capacity, resulting in buses blocking crosswalks and the roadway.

Currently, there is an 80-metre-long tour bus zone on the north side of Canada Place Way, with tour buses permitted to stop for three minutes to unload and load passengers.

“Canada Place is one of the busiest tourist destinations in Vancouver. This short two block roadway is not only home to Vancouver’s cruise ship terminal, but also the Vancouver Convention Centre, multiple large hotels, and many businesses and restaurants,” reads a city staff report.

“Accordingly, Canada Place has become a strong draw for buses that service the tourism industry and is a transportation hub that is used by long- and medium-distance buses, hop-on/hop-off buses, shuttles and taxis.”

To address the issues, city staff are proposing peak season permit fees of $2,000 per tour bus license plate using Canada Place Way more often than every other day between May 1 and October 15 for each year. For less frequent users, a $25 daily permit fee for each tour bus license over the same period annually would apply.

There would also be a $400 fine for tour buses stopping on Canada Place Way without a permit.

Revenues generated from the new permit fees and non-compliance fines would go towards funding the cost of stationing a Vancouver Police Department officer at Canada Place Way on a full-time basis.

The city says the introduction of the VPD officer at Canada Place in 2008 was an “effective mitigation factor,” and it was evident by how traffic flowed better throughout the 2018 season. Additional police resources for Canada Place are estimated to cost $175,000 annually. 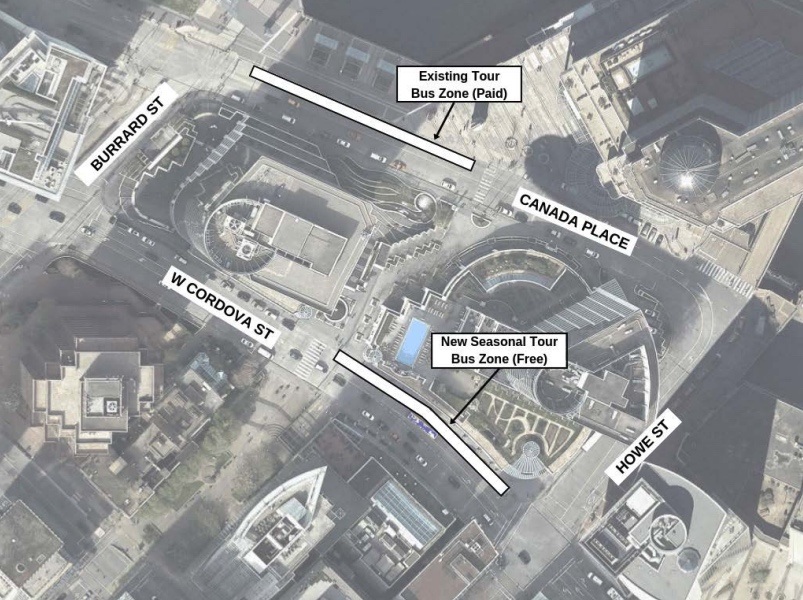 Tour bus zones in and around Canada Place. (City of Vancouver)

The new permit fees are also meant to encourage more tour buses to use a new additional free-to-use temporary tour bus zone on the north side of West Cordova Street near Howe Street — on the other side of the Fairmont Waterfront Hotel, just one block south of Canada Place. This new zone will lower the demand on the Canada Place Way zone.

“This zone, which is located in a less convenient location than Canada Place, will be sized according to observed demand and will act as an overflow when the Canada Place tour bus zone is full. It will also be available to buses that do not wish to pay for a permit,” wrote city staff.

City staff note these recent improvements and proposed changes for the area began after the fatal collision between a pedestrian and a tour bus in Summer 2017.