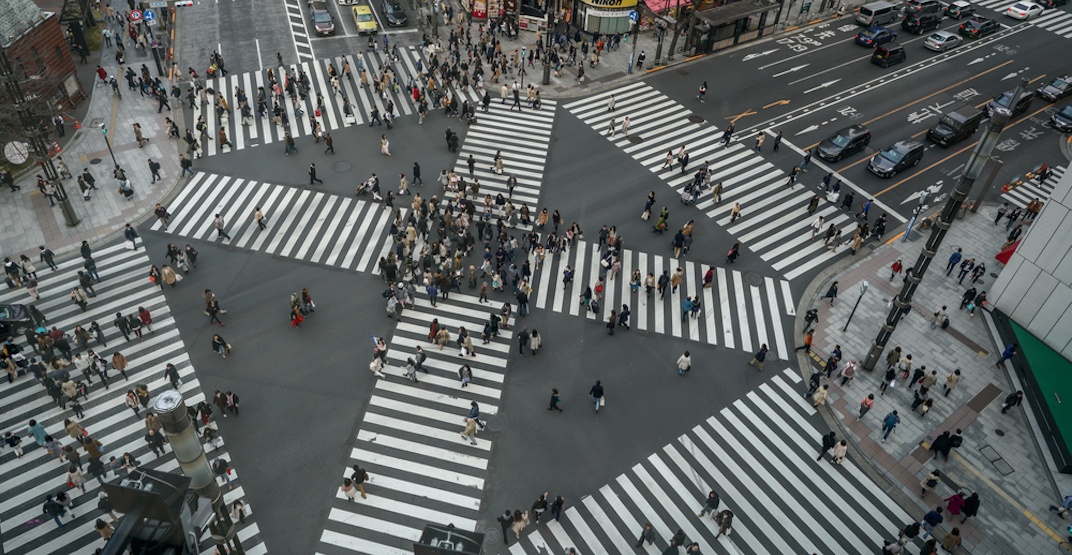 The heart of activity in downtown Vancouver is about to get a whole new look that will incorporate two new scramble pedestrian crossings — the first of its kind in the region.

As a part of the approved $5.4-million rebuild of the 800 block of Robson Street — the roadway above Robson Square — into a pedestrian-only, event-friendly plaza, the City of Vancouver is turning the intersections at both ends of the plaza into a scramble pedestrian crossing.

In an email to Daily Hive, the municipal government says the intersections at Howe/Robson and Hornby/Robson will be implemented as scramble pedestrian crossings on a pilot basis. An ‘All Walk Phase’ in the traffic signals of both intersections will stop all vehicle traffic and allow pedestrians to cross in all directions, even diagonally.

Both intersections were chosen for the pilot due to the high pedestrian and turning vehicle volumes, according to the city.

The change in the traffic signal operation, plus the visual identifier of an intersection painted with an ‘infinity’ design, will improve safety for all road users, especially the area’s walkability. This span of Robson Street is one of the busiest areas in the entire region for pedestrian foot traffic.

At this time, a previously considered scramble pedestrian crossing for the intersection of Granville/Robson is not being reexamined, however, the city says it will consider other suitable locations depending on the outcome of the pilot project.

Scramble pedestrian crossings are found at intersections with high pedestrian traffic in many cities around the world, including Yonge/Dundas in Toronto, Hollywood/Highland in Los Angeles, Oxford Circus in London, and Shibuya Station in Tokyo.

And a lesser-known scramble crossing in Metro Vancouver is located at the intersection of No. 1 Road and Moncton Street in Richmond’s Steveston district.

City council approved the new plaza project last week, which includes features such as a continuous flat level of concrete and pavers consistent with the rest of Robson Square, improved drainage, landscaping, movable furniture, curved wooden benches around the glass domes, permanent lighting, public art, and bollards on both ends of the plaza.

While the project was designed by the municipal government, it will be implemented by the provincial government, which owns Robson Square. Funding will largely be provided by the city.

Construction on this fast-tracked project is expected to begin later this year.