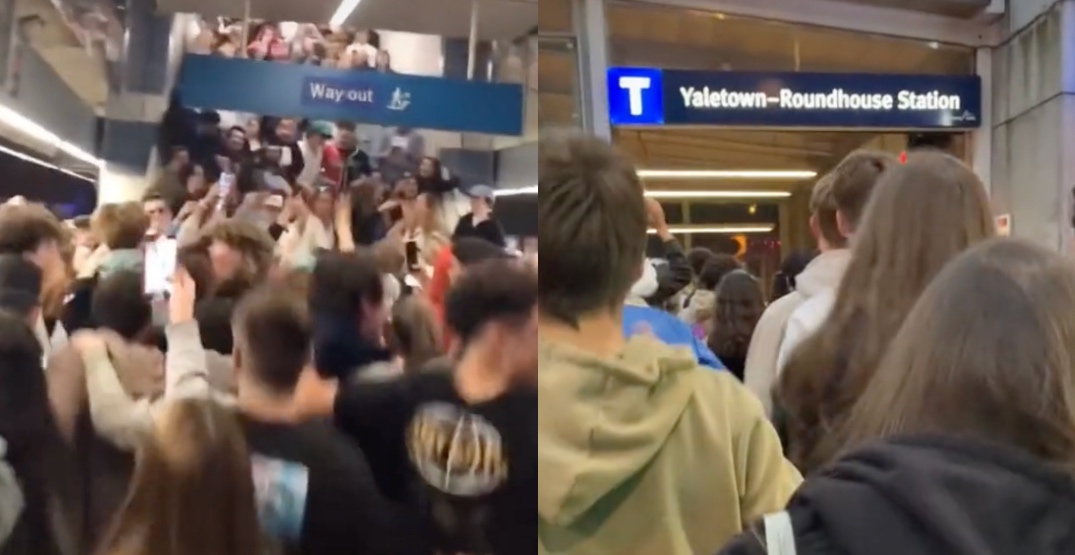 You know when they say, “You don’t have to go home, but you can’t stay here”? That’s pretty much exactly what happened over the weekend in Vancouver when a group of young folks took over the Yaletown Canada Line Station.

Constable Amanda Steed from Metro Vancouver Transit Police told Daily Hive that they did not receive any calls for service “regarding the large, enthusiastic crowd of young people” that flooded the station over the weekend.

“It is my understanding that a party was broken up nearby in Vancouver, which caused the unusually large crowd to spill onto the Platform at Yaletown Station,” said Steed.

“While the crowd was larger than what we normally see, we did not receive any reports of unsafe or criminal behaviour.”

Vancouver Police told Daily Hive that with COVID-19 restrictions ending and the weather improving, they’re “definitely seeing more people of all ages come to the city.”

“It looks like the young people in these videos were having a good time, and we’re happy to see that. Kids in parks are a good thing, and I’m not aware of any public safety concerns as a result of this,” said a VPD media liaison.

Videos posted to social media show snapshots of where the party-goers were headed, from David Lam Park to Yaletown-Roundhouse Station.

If you ever find yourself amidst a crowd like this, here’s what Transit Police says you should do:

All stations are monitored by CCTV and there are various other safety features like the yellow safety strip, onboard intercom system, and the ability for trains to be stopped prior to entering a station.

With us being on the eve of summer, and high schoolers about to graduate or head off on break, it’s possible that you run into some of these enthusiastic youths. If you can’t beat them, join them!