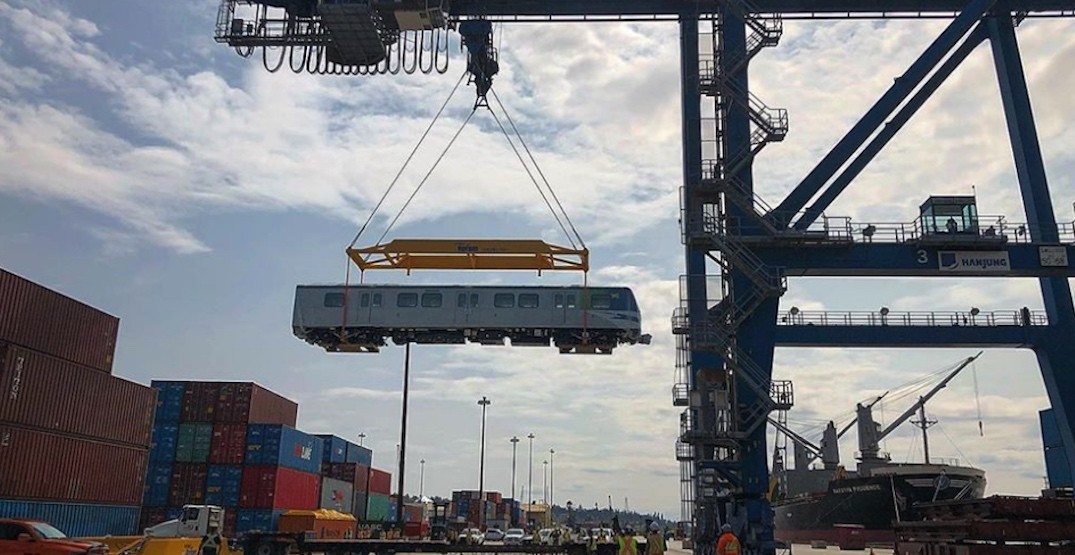 The first new two-car train for the SkyTrain Canada Line made its arrival in Metro Vancouver earlier this week on a cargo ship that began its journey in July from South Korea.

Two cars arrived at Fraser Surrey Docks on Tuesday, and they were loaded onto oversized flatbed trucks on Wednesday for delivery to the Canada Line’s operations and maintenance centre (OMC) near Bridgeport Station, where they will be married into a single train and undergo final testing and commissioning.

A total of of 12 new two-car trains (24 cars) have been ordered, with the remaining cars expected to arrive throughout the remainder of 2019. By early 2020, this increases the Canada Line’s useable fleet size from 20 two-car trains to 32 two-car trains.

When all cars are in use, scheduled frequencies will be increased to provide the Canada Line with the ability to reach a peak capacity of over 8,000 passengers per hour per direction (pphpd) — up from 6,100 pphpd today. Frequencies will increase by up to one minute during peak hours.

“The Canada Line has proven to be a popular service connecting major hubs and city centres,” said TransLink CEO Kevin Desmond in a statement. “More cars means an increase in convenience and comfort for our Canada Line customers. Customers are going to see and feel a difference in their daily commutes.”

Photos and video of the first train delivery also show that the ends of the new fleet will feature the Canada Line’s distinctive blue, white, and green exterior livery. 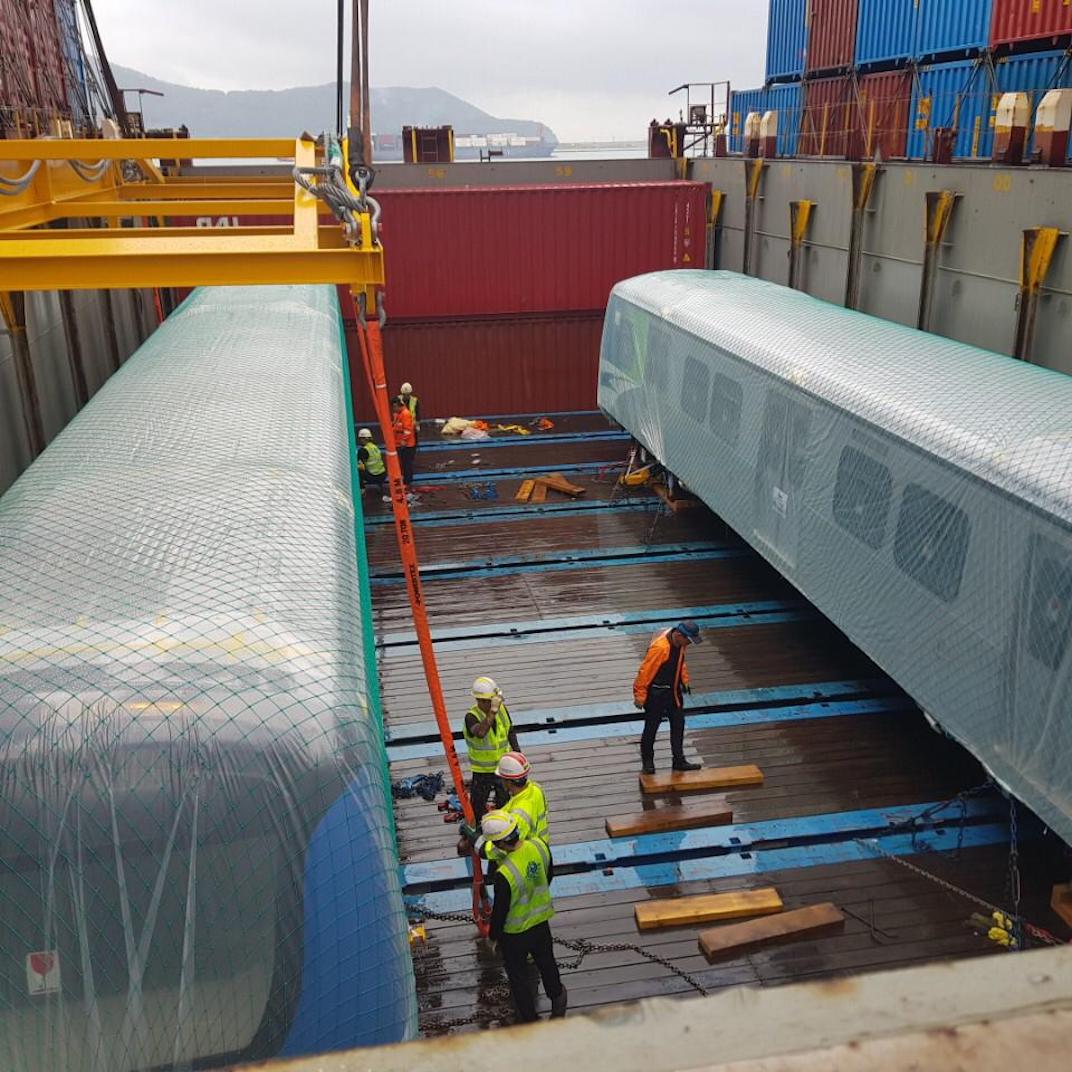 TransLink confirmed the $88-million train order in early 2018, with the federal government covering 50% of the cost, the provincial government taking 33%, and TransLink handling the remainder.

To accommodate the influx of the new fleet additions, the OMC’s train storage yard was expanded, and new additional escalators are being built to reach the platforms of all three Canada Line stations in downtown Vancouver.

This Canada Line train order is separate from the Expo Line and Millennium Line system’s new 56 new Bombardier-built Mark III cars, which are scheduled to fully arrive by the end of 2019.

The new escalator at Yaletown-Roundhouse Station on the Canada Line is now open (I use this station everyday). I didn’t realize both are up escalators, much-needed to clear the platform quickly. #TransLink #SkyTrain #Vancouver @DailyHiveVan pic.twitter.com/nJaAoaZzrd 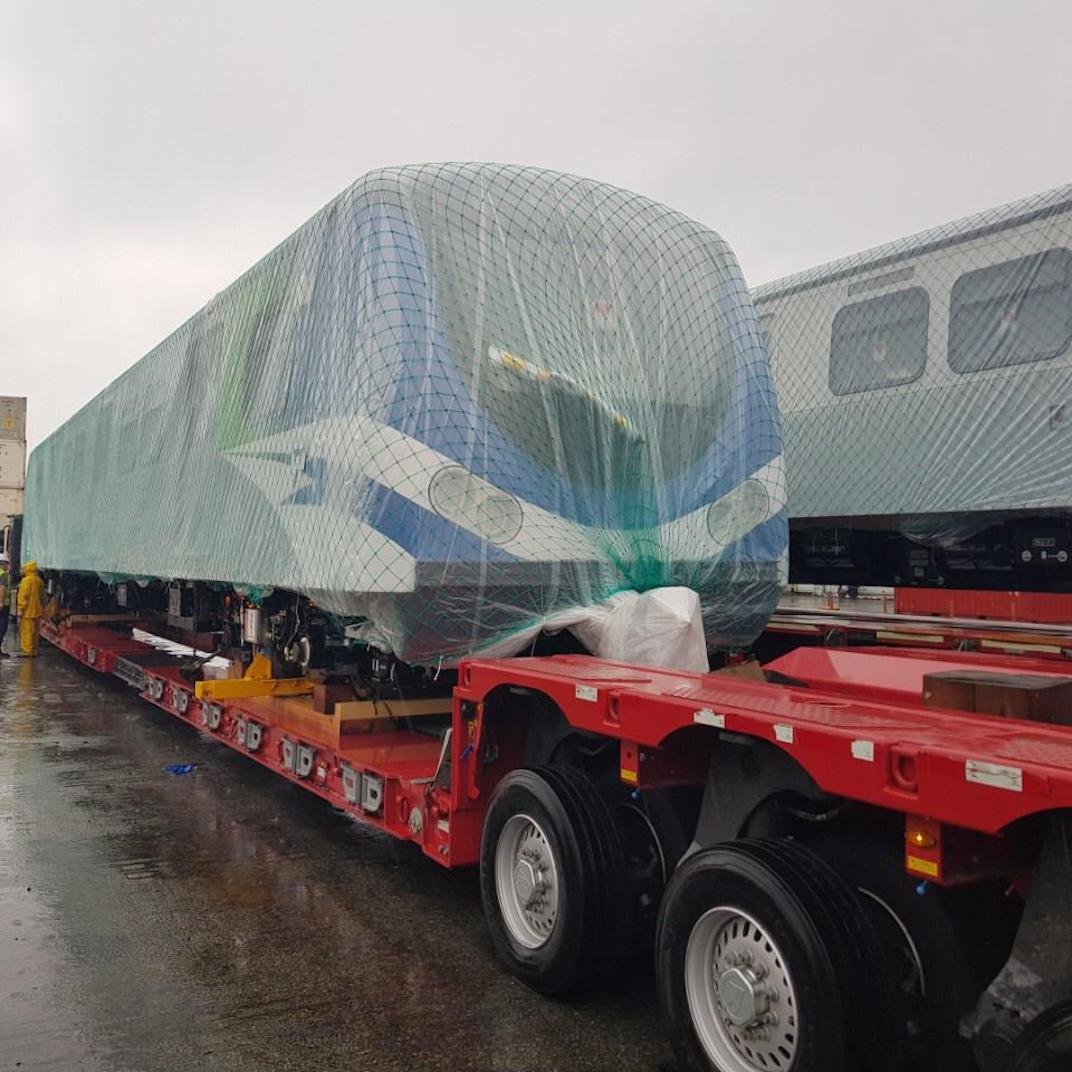