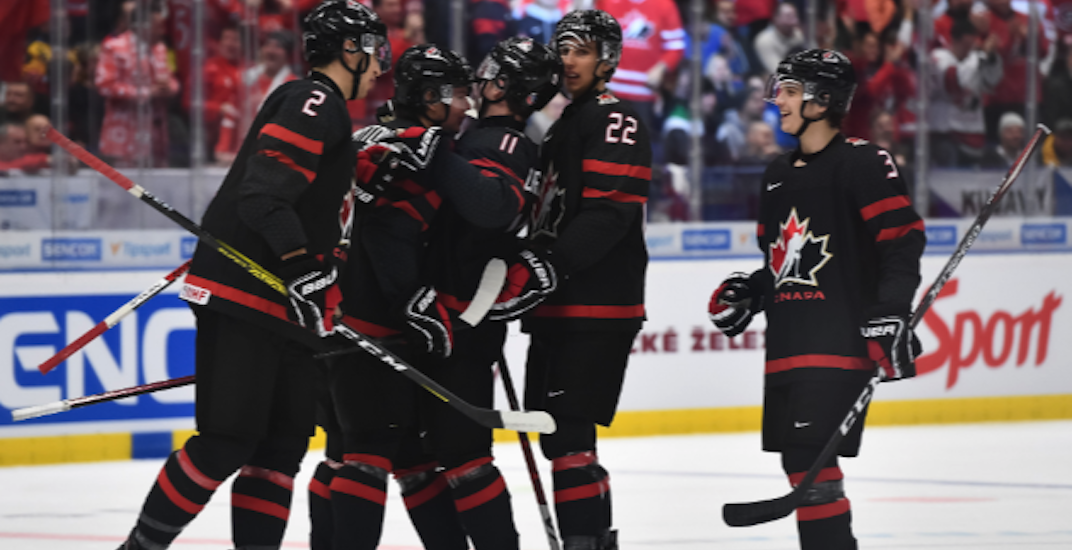 Canada is off to the semi-finals at the World Junior Championship in Ostrava, Czech Republic, after a convincing 6-1 win over Slovakia on Thursday.

It’s Canada’s first semi-finals berth in two years, after being upset by Finland in the quarter-finals in Vancouver one year ago.

The heavily-favoured Canadians faced adversity in the first minute of the game, after Nolan Foote was given a five-minute major penalty and a game misconduct for a check to the head. It was an incorrect call, as Foote’s check appeared to be clean — and certainly wasn’t a head shot.

Nolan Foote has been assessed with a game misconduct after this hit on Kristian Kovacik. pic.twitter.com/sgxeH2EcJF

Canada managed to kill off the penalty, needing some big saves from goaltender Joel Hofer, who had a relatively easy game after that.

Alexis Lafreniere, who returned to the lineup after suffering a serious-looking knee injury in Canada’s loss to Russia five days ago, set up Barrett Hayton for the first goal of the game less than a minute after the penalty expired.

There it is! Alexis Lafrenière, in his return from injury, finds the captain Barrett Hayton to get 🇨🇦 on the board first 👀 pic.twitter.com/wioLrYNBd9

The floodgates opened in the second period, as Canada scored four times, with goals from Connor McMichael, Jacob Bernard-Docker, Liam Foudy, and Lafreniere. Hayton added another goal in the third period, while Oliver Okuliar scored for Slovakia to break Hofer’s shutout.

“It’s great to get through the quarter-final game,” said Team Canada head coach Dale Hunter. “The Slovaks played us hard and them having a five-minute power play right at the start of the game was tough. Hofer made a couple of big saves and it gave us a chance to get our game going.”

“It was great to be back on the ice with the guys,” added Lafreniere, who is the consensus pick to go first overall at next June’s NHL Draft. “It’s a great group and I wanted to be out there with them. I’m feeling good and glad that I was on the ice and part of the win.”