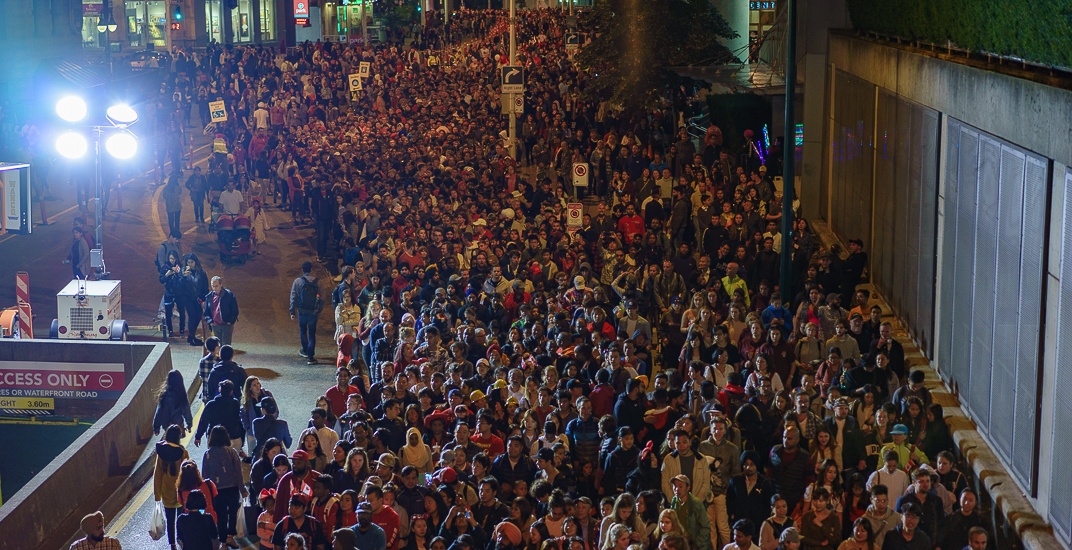 Lines on West Cordova Street into Waterfront Station after the Canada Day at Canada Place 2018 fireworks in downtown Vancouver. (submitted)

Tens of thousands of people streamed into Waterfront Station in downtown Vancouver late this evening shortly after the conclusion of the fireworks at Canada Day at Canada Place.

But despite the sight of surreal-sized lines on the roadway outside the station hub on West Cordova Street, the egress process was significantly more organized and orderly than previous years.

And these lines, a new addition for 2018, moved relatively quickly. 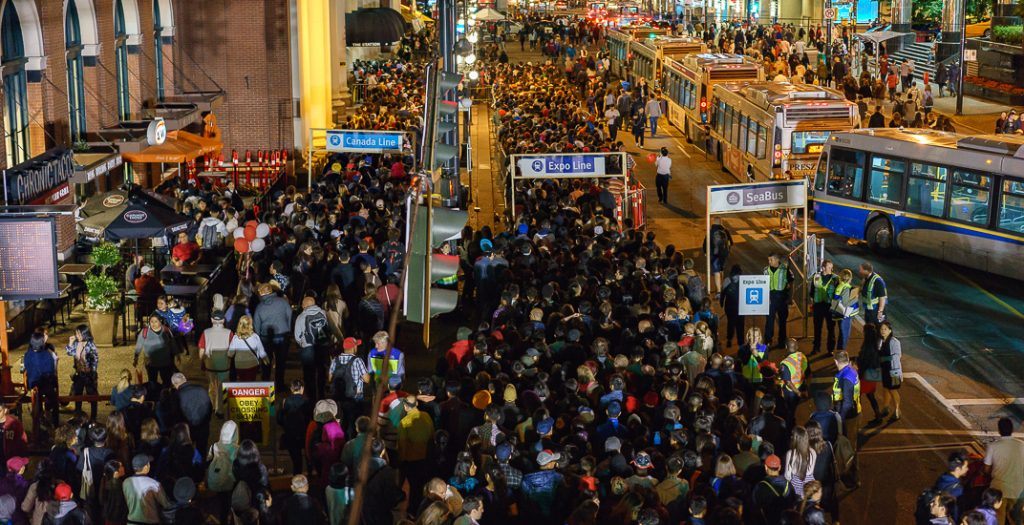 This year, TransLink and police created three different queues on the roadway for the Canada Line, Expo Line, and SeaBus.

Each queue was identified by clear overhead signage and separated by fencing, and there were also attendants and other staff on hand holding signage to help direct the crowds.

Spectators were also being asked to consider taking a short walk to Granville Station, Burrard Station, and Vancouver City Centre Station instead as the lines at these stations were small.

The fireworks at @CanadaPlace are just about over. We’ll get everyone home quickly and safely with help from @VancouverPD & @TransLink frontline staff. Look for the marked queues along Cordova street to get on the correct train or SeaBus. pic.twitter.com/0VDynfE9et

Waterfront Station Alert: make sure you are in the right queue! Don’t wait in the wrong SkyTrain or SeaBus line. We’ve had to redirect several people to the back of their correct line already. Nobody wants to wait twice. pic.twitter.com/eWTaVtEdTO

Fireworks are done and Waterfront Station is very busy. But everyone seems to be in good spirits and the crowds are moving well. Let us know if you spot any problems – text 87.77.77 pic.twitter.com/oBjuY24Nea

During previous years, a large, disorganized post-fireworks crowd would form outside the Howe Street entrance into Waterfront Station, creating a huge bottleneck not only into this particular station entrance but also on the roadway for those heading further south. However, this entrance was completely closed tonight after 6 pm, and the crowds were instead directed to use the main entrance on West Cordova.

According to Transit Police, the organized lines on West Cordova Street into Waterfront Station completely dissipated at approximately midnight – just slightly over an hour after the conclusion of the fireworks.

No major issues have been reported throughout the day at the festivities in downtown Vancouver.

Canada Line and SeaBus queues are done. Expo Line is still quite long, but moving quickly. Thank you for your patience tonight as we work to get everyone home safely. pic.twitter.com/d9xIxlIX1w