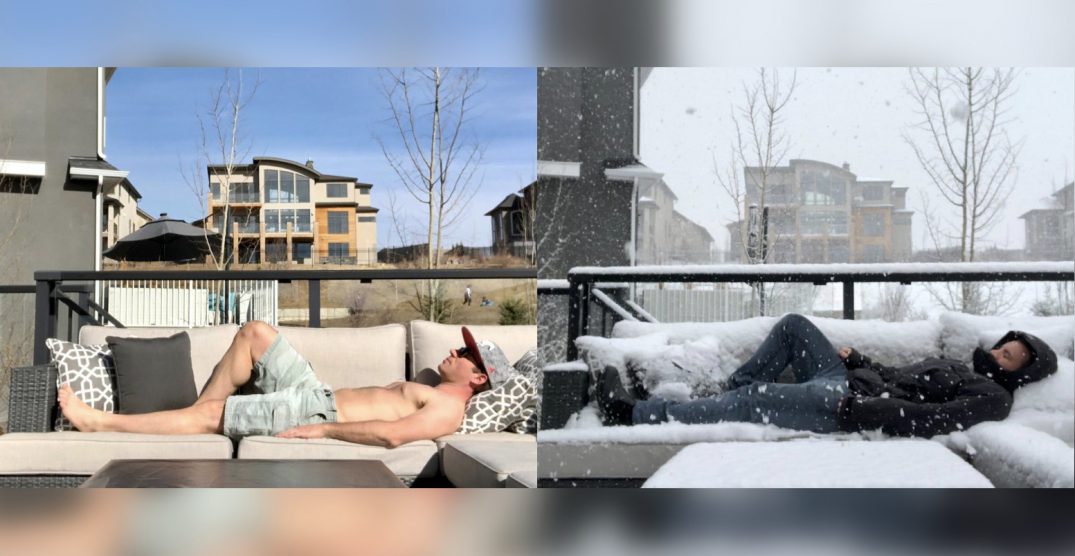 Calgary was treated to a little bit of weather whiplash over the weekend, seeing sunshine and a high of 20ºC on Saturday before waking up to snow and temperatures around the freezing mark on Sunday.

After some Albertans reported sunburns, snowfall warnings were put into effect on Saturday evening for areas along the province’s foothills. A snowfall warning was also issued for Calgary on Sunday around 12:40 pm, ended at 5:13 pm.

According to The Weather Network, the chilly weather will continue into early this week, before starting to give way to milder conditions by mid-week.

“Although no major storms are in sight, some additional shots of cooler and unsettled weather are possible for the final week of April,” says The Weather Network.

Calgarians took to Twitter to show off the difference in weather between Saturday and Sunday.

Another exciting weekend in Calgary. 🙂 pic.twitter.com/7CCQhEXHWN

File this in the “What a Difference a Day Makes” folder. To save y’all from scrolling I’ll repost a photo I took & tweeted yesterday with one I took today. From sunny & 21°C to snowy & below 0°. Yesterday’s shot has 21 people in it; today I was alone in the park. #yycweather 🙂 pic.twitter.com/TMb18PhDt9

Flip flops and the beach yesterday.