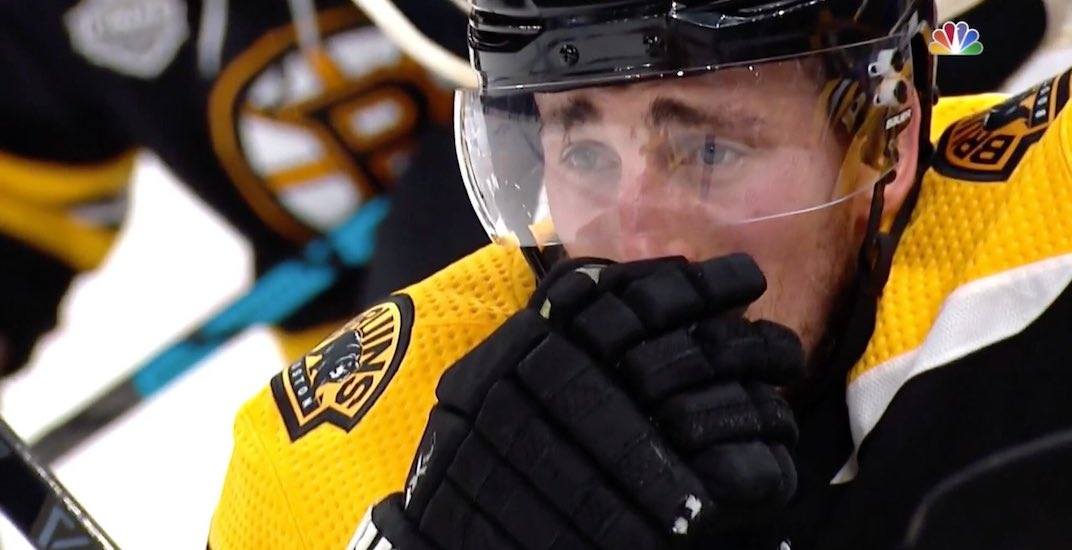 If there was one enduring memory from the Vancouver Canucks’ loss to the Boston Bruins in the 2011 Stanley Cup Final, it was probably the image of Marchand punching Daniel Sedin repeatedly in the face, unmolested. It was an image that has burned into the minds of Canucks fans everywhere, one that has often been the fuel for the idea that the Canucks needed to become a bigger, stronger team.  This idea has gotten to the point where we have people trying to convince you that Milan Lucic would be a pretty solid pick up because he could “protect Elias Pettersson” which is the cold fusion of hockey talk.

The reality of 2011 is that there were plenty of reasons the Canucks lost. Injuries, Gregory Campbell’s DNA, officiating, skill of the teams involved, Steve from Burnaby (you know what you did), and of course, plain old luck. There are many paths to travel when trying to figure out just what went wrong for Vancouver. Some of the theories are valid. Some of them not so much.

But the one idea that was held onto deep into the night when Canucks fans prayed for a dreamless sleep away from the horrors of 2011, was the idea that the Canucks simply got beat up by a bigger, badder team. It wasn’t necessarily right, but it felt like it could be, you know? Sports is at its core a very primal thing, and sometimes it’s just easy to feel that your home team needed to try a little harder, and push back a little more, even if they actually left it all out on the ice.

And make no mistake about it, the 2011 Canucks team was a sorry puddle of broken bones, missing teeth, and torn ligaments by the time the playoffs ended. It’s hard to imagine they had much more to give, to be honest. Pieces of Dan Hamhuis intestines are still embedded in the ice at Rogers Arena to this day, a macabre version of the lucky looney.

It’s just, there is something very cathartic about wanting your team to physically dominate an opponent. Again, sports are raw. They’re primal. In hockey we’re essentially watching two teams try and put a piece of rubber into a box to prove their superiority, while Steve from Burnaby bangs on the glass like the idiot that he is. And sometimes you just want to feed that beast.

If Daniel Sedin reacted to Marchand by literally power-bombing him through the glass to the theme from Jurassic Park, that would have been the most viewed hockey video of all time in BC. People would get Daniel Sedin tattoos on their bicep and would start screaming incoherently about welcoming you to the Swedish gevär show every time they got drunk.

Is it an elegant picture? Of course not. The Sedins would never do something like that, and are two of the most beloved people in hockey history due to their benevolence and sportsmanship. But Marchand punching Daniel Sedin, fair or not, became almost symbolic of the idea that the Canucks needed to fix things. That they couldn’t get pushed around like that again. So this idea of needing to be bigger and tougher was planted, and it slowly grew over time. Nothing was ever going to change the result of 2011, but damn it, they could be ready the next time someone tried to punch them in the mouth!

And somewhere along the line, this chase for vengeance took on elements of a WWE storyline. Instead of Vince McMahon, though, Canucks fans had Marchand. A constant villain that would show up year after year, no matter what.

Even as the Bruins team evolved and and changed, Brad would be there, smirking and having Steve Austin thrown out of the building. Dr. Recchi was no longer giving out medical advice. Gregory Campbell wasn’t around so Dad could relax on sending out e-mails. I assume Tim Thomas opened a Chick-A-Fil somewhere. Shawn Thornton retired to become best friends with Thomas Drance. Patrice Bergeron is simply impossible to hate and it’s hard not to respect the job Chara has done.

But there was Brad. Always Brad. The one constant that kept us all alive on the island. He was the face of all that went wrong in 2011 and he was becoming a bigger more important piece of the Bruins every year. It was impossible to ignore him, to be honest.

And Brad? He leaned into it. Marchand miming kissing his Stanley Cup ring on Vancouver ice. Marchand low-bridging Sami Salo and claiming he feared for his own safety. Marchand having “Champian” tattooed on his body. Marchand licking and cheap-shotting other team’s players, making other fan bases cry out in anger, driving Canucks fans to go out on their lawn to scream “WE WARNED YOU IN 2011, WHY DIDN’T YOU LISTEN TO US!!” Credit where credit is due, he was a very effective heel.

Which brings us all the way to last night. To Marchand once again in a Stanley Cup Final Game 7 situation. With another chance to stomp all over Canucks fans by lording a Cup win over them. Another chance to gloat and revel in how easy it all was for him. It felt almost inevitable that the Bruins were going to win, it just felt like a very Vancouver thing to happen. It was Vince McMahon cockily planting his foot on his fallen foe to get the three count yet again.

Except something funny happened. The St. Louis Blues, one of the longest members of the Sad Club? Their god damn music hit, and with ‘Gloria’ blaring over the speakers, they ran to the ring with a steel chair in their hands while Jon Hamm screamed about how business was about to pick up. By gawd, Stone Cold Binnington damn near broke the Bruins in half!

Not only did the Blues show up, but they beat the Bruins in a fashion eerily similar to how Vancouver lost in 2011.

The Blues goaltending? It was on fire. The Blues offence? They made it look easy to score goals. That game was over after the first period and everyone watching knew it.

Just seeing the silence that slowly enveloped the arena as the Bruins fans watched their heroes suffocate under the tatters of of shattered dreams falling all around them was like going back in time to Vancouver in 2011. You couldn’t help but clap giddily at the thought of the Bruins possibly losing by the same score of 4-0 as the Canucks once did, a sure sign that poetic justice was being doled out as there ever was.

And Chicago? They were still a mortal enemy, so you couldn’t feel too good about them winning.

But 2019? This was Game 7 on home ice against a Blues team that is far too boring to offend anyone. And more importantly this was Marchand’s team. If ever there was a year where he was “the guy” for the Bruins, this was it. Kids grow up dreaming of being the hero that wins their team the Cup, and Brad was tied for the lead in playoff scoring, he was showing up big time. You knew him winning this year would provide him with a validation that nothing else could match. He wanted it so badly he could almost, well, lick it.

In the end, though, he had to watch it all fall apart around him. His chance at leading his Bruins to a Cup in front of his home crowd floated away into the night, serenaded away by Laura Branigan. The picture of him with his glove over his mouth as his eyes welled up, it was eerily similar to the image of Ryan Kesler weeping on the ice after he had given everything he had to win the Cup for Vancouver. Seeing the tears of Marchand? It felt good.

No, it felt great.

And that’s not to come down on an athlete for showing emotion. It’s the year 2019, we don’t need to sit around and mock an athlete for showcasing how much they wanted to win. Give me Joel Embiid weeping after losing a Game 7 over an athlete planning their summer vacation right after they lose, any day of the week.

No, it’s because we could sit back and see Marchand was finally going through the pain of what happened to Vancouver. That a man who had been so open about how he loved to get into the heads of his opponents in a Player’s Tribune article in 2018, a man who seemingly got off on terrorizing opponents using whatever means necessary, finally got a taste of his own medicine. That under all his bravado, he was just another sad hockey player losing out on a dream, and it helped humanize him as we can all relate to that.

And it was therapeutic as hell to watch.

“Is this the most painful loss of your career?”
“By far.” pic.twitter.com/LgKvFcYnm1

It was a giant release that I don’t think many in Vancouver even realized they needed.

Look, people have long accused Vancouver fans of needing to get over 2011, and they’re probably right. Some people right now are probably wondering why Vancouver would celebrate another team’s loss so brashly. But it’s sports, man. I hate to go back to that well, but sports is this weird combination of being the most silly, non-vital thing in the world to the most serious, exhilarating, important thing in the world. To deny one aspect of that dichotomy would be disingenuous on the best of days.

So yes, maybe Vancouver fans held out for revenge too long, but damn it, last night they got it and it felt wonderful. And sports, when it tells a story, when it organically unfolds a narrative that even Steve from Burnaby can understand, there is nothing in the world better than the high you get from watching it play out.

Yes, it would have been nice if the Canucks had doled out the revenge themselves. And yes, the Bruins will always have the 2011 Stanley Cup to lord over the Canucks. It just felt nice to finally see someone step up and hand Marchand a huge “L” after all these years. To see him finally not have a glib answer for something. It was the most therapeutic final Canucks Nation has ever seen, to be honest. It was Bret Hart finally beating up Vince McMahon after the Montreal Screwjob, shedding years of emotional baggage in the process.

And with that, comes the end of a long story. It suddenly doesn’t feel as important for the Canucks to beat up Marchand, or get revenge on the Bruins. Sure, the games between the two teams will still feel important for a while, and nobody will turn down the chance to boo Marchand in future games. But it no longer feels like the desire for revenge has to drive the bus when talking about 2011. Maybe it’s a minor consolation to some, but it feels like an important one. It’s not about making up for 2011, it’s about finally feeling ready to move on from that loss.

Now we can sit back and get back to what really matters. And that’s how do we get Steve from Burnaby to stop being such a jerk. And to maybe finally move on and to dream about the Canucks winning a Stanley Cup like St. Louis did, and let go of that image of Daniel Sedin and Marchand. And maybe replace it with newer, happier ones.

Congratulations DJ MDZ. We always knew you could do it.