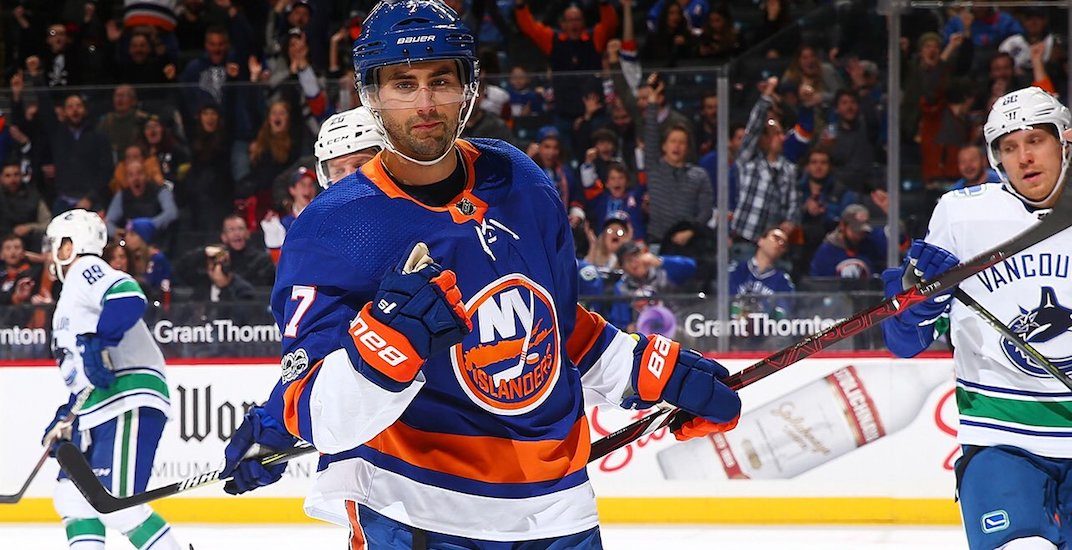 Many people expect the Vancouver Canucks to make a splash in free agency this summer.

It makes a lot of sense given the team hasn’t made the playoffs in four straight seasons and the GM’s job may hinge on getting back to the postseason in 2020.

Benning: In free agency, we'll look at all our options. If there's moves we can make to address weakness, we're going to be aggressive to address our weaknesses. That's a priority #canucks

“I’d like to add another top six forward and a defenceman,” Jim Benning told Sportsnet 650 radio in April – pointing to free agency or the trade route as possible options.

There’s also the fact that the Canucks have cap space and a number of intriguing unrestricted free agents will be available.

The biggest hole in the Canucks’ lineup is on defence, where Alex Edler and Chris Tanev are getting long in the tooth. Edler, 33, doesn’t have a contract for next season and there’s no guarantee that he re-signs. Tanev, 29, has seen a noticeable decline in his play in the last couple years.

Quinn Hughes is in the fold, as are Ben Hutton and Troy Stecher. Olli Juolevi could crack the lineup as well.

The problem? Unless Hughes develops at a quicker than expected rate or Edler and Tanev defy Mother Nature, they’ll be without a true top-pairing defenceman.

Erik Karlsson is the big fish this year, but family commitments and a desire to win probably keep him away from the Canucks. Jake Gardiner is another blueliner worth looking at, but will the Minnesota native want to leave one fishbowl in Toronto for another one in Vancouver?

Tyler Myers is a player many believe the Canucks have interest in, and that makes sense on the surface. Myers is big, a right-shot, and has offensive ability. His wife is also from BC — that never hurts.

The problem is that the advance stats tell a more grim story, meaning that he’s likely to get overpaid.

A good crop of UFA forwards

This year is loaded with good forwards expected to be available on July 1.

It begins with Artemi Panarin, a 27-year-old winger coming off four straight 74+ point seasons, including a career-high 87 points last season. Blue Jackets teammate Matt Duchene is another elite UFA to be, as the 28-year-old scored 70 points last season.

Other forwards worth a look include Jordan Eberle (37 points), Jonas Donskoi (37), and Marcus Johansson (30).

As tempting as the available list of free agents may be, Benning needs to keep in mind where his team is in its evolution.

While it may be time to contend for a playoff spot, he needs to beware of long term contracts that could hurt the team’s chances of contending for a Stanley Cup in the future.

While every player ages differently, the danger age is 30 in the NHL nowadays. In a league that’s seemingly getting younger and faster every season, we’re seeing an increasing amount of players falling off dramatically after their 30th birthday.

“Most players hit their peak age by age 24 or 25 then decline gradually until age 30, at which point their performance can begin to tumble more noticeably with the risk of absolute collapse by age 34 or 35,” says Rob Vollman in the book Stat Shot: The Ultimate Guide to Hockey Analytics.

The easy example for Canucks fans is Loui Eriksson, who scored 30 goals at age 30 with the Boston Bruins, but has been a shadow of his former self in Vancouver at ages 31, 32, and 33 — and he still has three years to go on his contract.

But the Loui lesson shouldn’t just apply to the over 30 UFAs.

What matters most is the age at the end of the contract, not the beginning.

That makes even signing 28- or 29-year old free agents a risky proposition if you get four- or five-year deals.

Long term deals for players in their late 20s and early 30s should be reserved for Stanley Cup contenders. Those are teams that can stomach short term success at the expense of regrettable years tacked onto the end of a contract.

The Canucks aren’t there yet.

Though they have cap space now, that will be in short supply when they have to re-sign Elias Pettersson and Quinn Hughes, among others, in a couple of years. Having anchor years on players in their early 30s – in addition to Eriksson and Jay Beagle – will come back to haunt them in what theoretically could be their Cup window.

Someone like Eberle should be approached with caution, given he’s coming off a down year and he’s already 29.

That’s not to say the Canucks shouldn’t sign anyone, just beware about how many years you’re paying for after age 30.