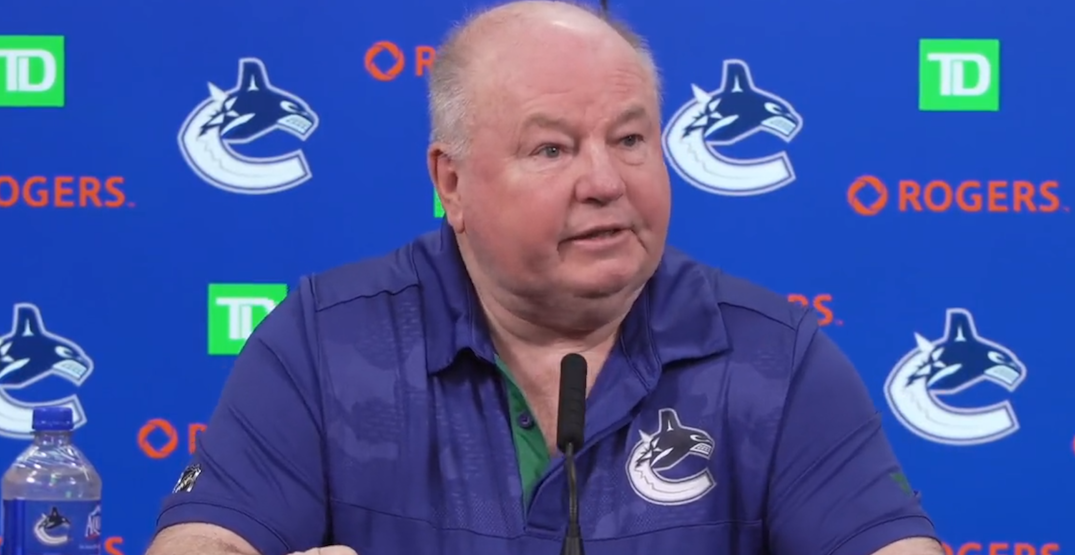 Bruce Boudreau wants to be back. Canucks fans want him back.

What about the new Canucks management team?

We’ll hear from Jim Rutherford and Patrik Allvin at tomorrow’s press conference, but today we heard from Boudreau — fresh off leading his team to an impressive 32-15-10 record since he was hired in December.

It wasn’t enough to get the Canucks into the playoffs, but it was enough to impress everyone. Still, reports last month indicated that Canucks management was unsure about bringing back Boudreau. Boudreau’s contract reportedly has mutual team and coach options.

But when asked about his future this morning, Boudreau made it clear where he wants to be next season. He also indicated that contract negotiations are ongoing.

“I told Patrik and Jim that I wanted to coach here next year,” said Boudreau. “We’re just talking right now. I’m sure, hopefully, things get done. But I think they want me back and I know I want to be back, so I think it should work out.”

Boudreau’s comments are aligned with a report last week from Irfaan Gaffar of The Fourth Period, which indicated that the Canucks coach was close to an extension with the team.

While Boudreau’s stock is clearly on the rise after how he turned around a struggling Canucks team, it wasn’t long ago that the 67-year-old didn’t know if he’d ever get another NHL job.

Boudreau was fired by the Minnesota Wild in February 2020 and waited nearly two calendar years before getting another NHL job, in Vancouver.

“When I left Minnesota I really had a bad taste in my mouth,” said Boudreau. “When you’re a year out, and you interview for a couple jobs in the summer and you don’t get them, you just wonder, do people think the time has passed [me by]?

“Coming back and having that kind of record, and having the team play the way they did in a lot of different areas, positively, it makes you believe that when you go home, that you did well, and that you still can do the job. The other thing is, you still have the fire in your belly and the desire to do the job and you can still handle the stress of the job, and you wake up every morning and can’t wait to get back to the job.

“That’s what I found out once I started doing it again, is I couldn’t wait to get to work. Sometimes you don’t realize how much you love something until you don’t have it, and then you get it back and you realize that.”