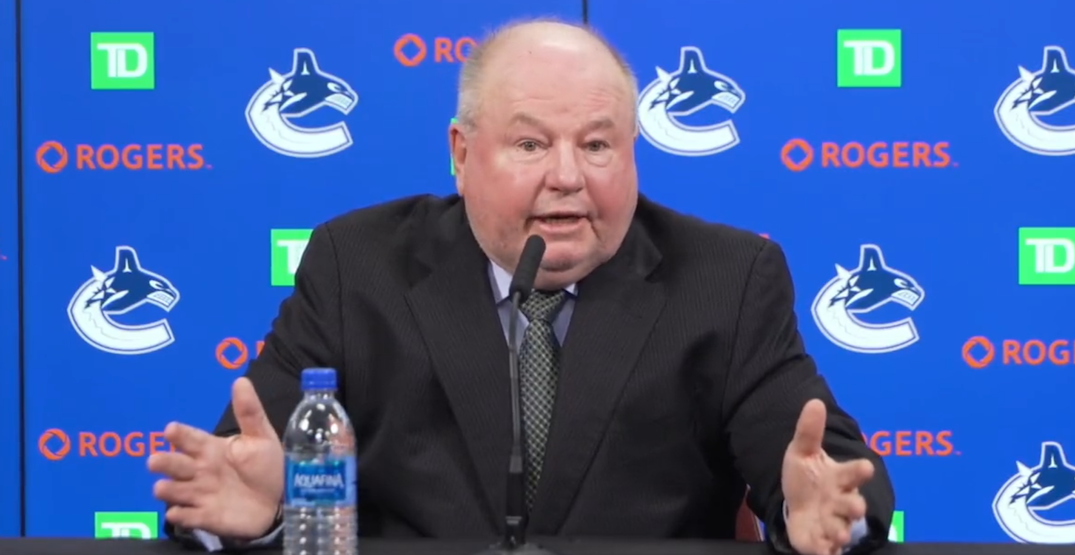 When Bruce Boudreau originally signed on with the Canucks to be their coach this past December, few wondered much about his long-term contract.

The 67-year-old Boudreau was brought into the Canucks fold to bring some stability into the Vancouver market and help turn around a disappointing season following the departures of longtime coach and GM combo Travis Green and Jim Benning.

Since his hiring, the Canucks have put up a 24-13-7, good enough for a .625 points percentage over that timeframe. The Canucks sit eight points out of a playoff spot but are undoubtedly in a better place than when Boudreau took them over.

But Sportsnet’s Elliotte Friedman drew some eyeballs earlier in the week when he suggested that Boudreau returning to the bench next season might not be a certainty, with the coach currently just under a one-year deal.

🏒 32 Thoughts Podcast 🏒@JeffMarek & @FriedgeHNIC chat about Bruce Boudreau's future with the Canucks, remember the late Eugene Melnyk and look ahead to the off-season for the four teams that have been eliminated.

On the 32 Thoughts segment of Saturday Night’s Hockey Night in Canada broadcast, Friedman revisited the discussion about Boudreau’s future.

“I think there’s a lot of people wondering about what might be happening or not happening in Vancouver with Bruce Boudreau and the Canucks,” Friedman said.

Canucks GM Patrik Allvin was asked in an interview on Sportsnet 650 with Dan Riccio about Boudreau’s future following the trade deadline and gave a rather tame non-answer about his future.

“You know what, we haven’t got into those discussions yet,” said Allvin. “Again, we’re evaluating our team as we move along here. That will be something that we, in our hockey ops, we’ll sit down after the season and talk about it.”

Friedman offered some clarity on the actual structure of what a new contract — or lack thereof — for Boudreau might actually look like.

“They have a great record since he got there. He’s on a one-year contract and there’s an option for next year,” Friedman added. “Now, nobody will tell me exactly what it is, but I think that I’ve kind of pieced it together. The Canucks have an option to keep him or not, but if they don’t, there’s a payment that has to go to Boudreau. Also, Boudreau has an option not to return, and if that was to happen, I don’t think he gets a payout, but it would put him on the open market at the end of the year.”

Essentially, if the Canucks want Boudreau back and he’s willing to return, they’ve already agreed on the terms of the deal. Two yeses, and he’s behind the bench once again.

If the Canucks are looking to go elsewhere, they’re still on the hook to pay him at least part of his deal, and if Boudreau’s looking to leave the team and is the one that makes that call, well, there’s no more money from the Canucks headed his way.

For now, there are 13 games left in the regular season with Boudreau behind the Canucks bench, with more answers likely to come in the offseason about his future in Vancouver.