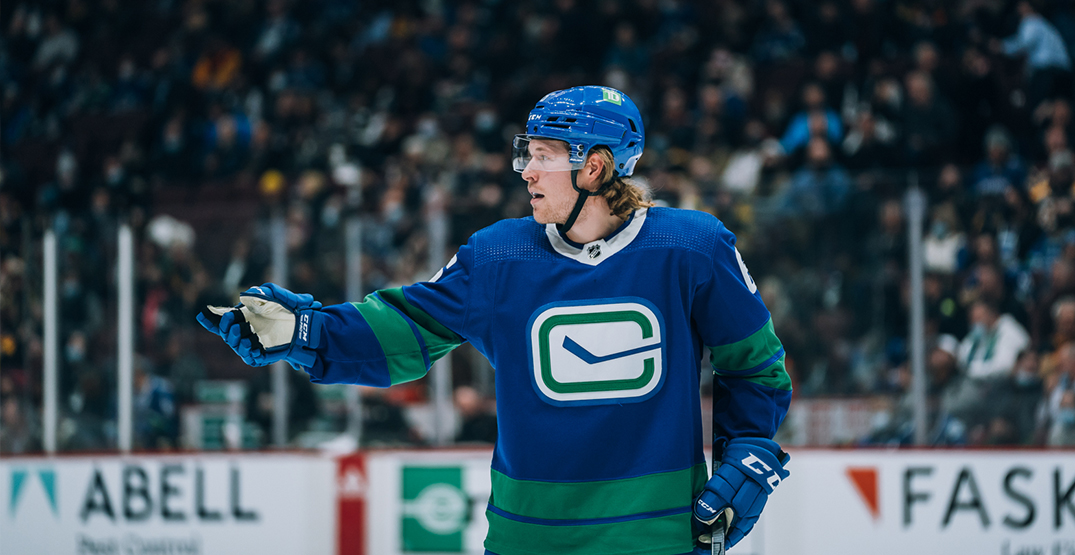 There’s an element of luck in all of the major sports.

However, there’s a strong case to be made that of all five major sports leagues in North America, the NHL involves luck the most.

I’m not sure if that will make Brock Boeser feel any better about the way his season has gone.

The 24-year-old is yet again in trade rumours, but there’s a reason why it might make more sense for the Vancouver Canucks to deal J.T. Miller.

But if Boeser wasn’t suffering from rotten puck luck, the conversation about his value and potential might be drastically different.

Would we really be talking about trading a 24-year-old entering his prime if he was scoring near a point-per-game clip?

From an even-strength standpoint, there’s little doubt that Boeser’s has been the unluckiest Canuck this season.

It’s not just that his 5-on-5 offence has dried up, but the Canucks in general just aren’t scoring when he’s on the ice.

A total of 735 NHL players have spent more than 100 minutes at even-strength this season. Among them, Boeser’s on-ice shooting percentage of 4.32% ranks 702nd.

Most players joining Boeser in the bottom 100 are either depth defencemen, checking forwards, or heavily sheltered young players.

Because of his ungodly-low on-ice shooting percentage, the Minnesota native has only managed to be on the ice for 14 goals at 5-on-5 in 43 games.

Basically, that means one of the Canucks best forwards has only been on the ice for an even-strength goal once every three games.

Even Tucker Poolman, who’s stick is where offence goes to die, has been on the ice for more even-strength goals (17) than Boeser, in fewer 5-on-5 minutes.

The 24-year-old has been rejuvenated under Bruce Boudreau with 10 goals in 21 games. However, six of those goals have come on the power play.

And, after scoring this “lucky” goal against the Kings, you had a feeling things were going to change for Boeser.

However, even this lucky redirection off of Drew Doughty occurred on the power play.

On the season, seven of Boeser’s 14 goals have come with the man advantage.

What Boeser’s point totals would look with normal luck

With Boeser being on the ice for 14 even-strength tallies this season, that gives him a paltry 1.34 goals per-60.

Because his underlying possessions metrics are strong, Boeser’s has an expected goals-for total if 27.3.

Since there are no partial goals in hockey, let’s say with normal puck luck, the Canucks winger would have been on the ice for 13 more goals this season.

His individual points percentage (the amount of on-ice goals that Boeser has registered a point on) is at 71.4%. That’s a normal total for a top-six winger, which further suggest that bad puck luck, and not a lack of effort, has contributed to his brutal 5-on-5 production.

If we take the difference between Boeser’s actual goals and expected goals (13.3) and multiply it by his 71.43% IPP, that would give Boeser another 9.5 even-strength points with normal puck luck.

Even if we round that down to nine, it would give Boeser 36 points in 43 games.

Boeser’s season was interrupted twice by an early foot injury and a longer than expected COVID-19 layoff.

Luck hasn’t gone his way so far, but don’t bet against Boeser turning around his even-strength luck over the final half of the season — no matter which team he plays for.