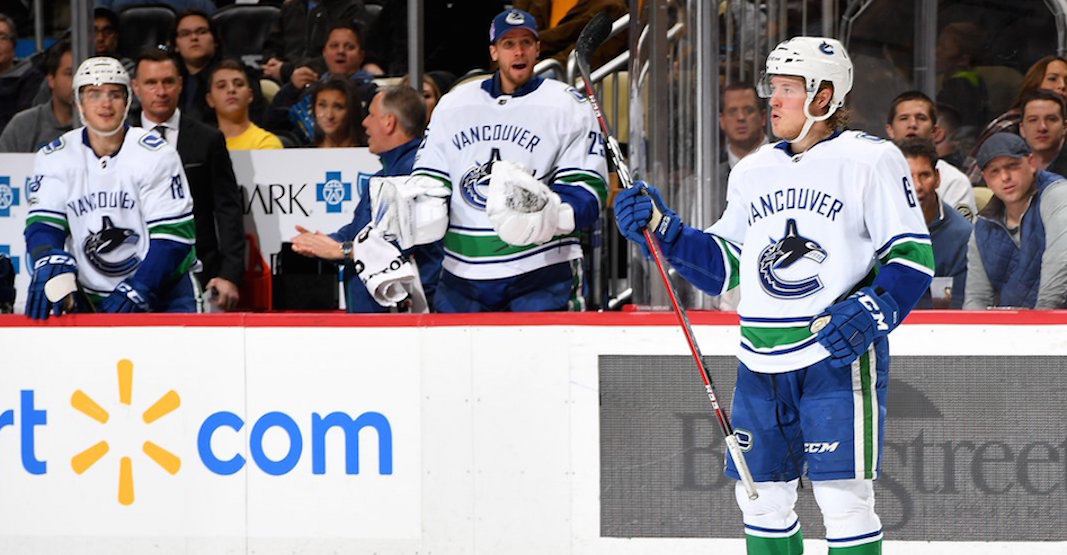 Wow, who saw that coming?

Sure, the Canucks beat the Penguins earlier this month, but Wednesday’s game was even more impressive.

Allow me to explain.

The Canucks were playing the second of back-to-back games, while the Penguins last played on Saturday.

Vancouver was on the road playing a Penguins team that was 6-1-1 at home heading into this game. A team that only lost six times in regulation last season at PPG Paints Arena.

But none of that mattered on Wednesday. Brock Boeser scored another pair of goals, and the Canucks took a 5-2 win for the second time in as many nights.

Brock Boeser is the third different @Canucks rookie in the last 26 seasons to record at least one goal in four consecutive team games. #NHLStats #VANvsPIT pic.twitter.com/Ex3EWHO4af

The Penguins already knew what Boeser and this year’s Canucks could do. They beat them 4-2 at Rogers Arena on November 4th when Boeser scored his first career hat-trick.

Still, their efforts to stop him were futile.

The Stanley Cup champions couldn’t do a damn thing about the Canucks’ super rookie.

Man that feels good to write.

HOW BOUT THESE VANCOUVER CANUCKS?!?!?

This kid just does not stop.

Another game…. another Boeser goal.

The Canucks’ rookie sensation has been shattering expectations all season, scoring his 10th and 11th goals of the season in only his 19th game.

It hasn’t just been a matter of luck for Boeser either.

Sure, his shooting percentage (19.2%) is likely unsustainable, but have you seen the guy shoot?

The best goal scorers usually shoot at around 12-15%. Steven Stamkos is up above 17% for his career.

There will be some regression, but not as much as you might think. Boeser is putting himself in prime positions to score. He had two goals on Wednesday, but he had another three or four really great chances that he didn’t score on, too.

2. Boeser in the Ovechkin spot

The Canucks reworked power play of Boeser, the twins, Horvat, and Edler is infinitely better than whatever they were trying before.

Throw that old blueprint in the garbage. It’s all about this now.

With Boeser now in Ovechkin’s office, the unit looks like it will actually do some damage.

"see what happens when you pass to me on the powerplay" pic.twitter.com/R0ptU8wMxT

Boeser had quite a few chances to get another hat-trick against the Penguins. His six shots in the game is the second-highest he’s registered this season, behind only the other Pittsburgh game, where he had seven shots.

Want another Boeser stat? He is sixth in the entire NHL in goals-per-game (10+ GP). The five ahead of him? Nikita Kucherov, John Tavares, Mark Stone, Auston Matthews, and Alex Ovechkin.

Just wait until he has Elias Pettersson feeding him.

With the game tied 1-1, the Canucks took the lead midway through the first period and never looked back – and it’s all thanks to Phil Kessel!

Try to find another goal like that all year. You can’t. You’d have better luck finding Waldo.

Scoring your first as a Canuck against the team that essentially gave up on you? Yeah, that’s worthy of the SixPack Superstar.

Derrick Pouliot has been steady on the Canucks back end ever since he was acquired from Pittsburgh and injuries afforded him a chance to play.

Heading into Wednesday’s game, his 53.9% Corsi rating led all Canuck defenders (excluding Troy Stecher, who has only played eight games), although he is getting favourable deployment with more offensive than defensive zone starts.

But back on the topic of this game, Pouliot finally got rewarded with a goal despite this being one of his less impressive games as a Canuck overall.

It was lucky, but he was due for some good karma.

With that goal, Pouliot has seven points in 19 games this season. That’s a 30-point pace over 82 games. That hasn’t been done by a Canucks defenceman since the 2014-15 season when Alex Edler had 31.

The Canucks were down to five defenders after Erik Gudbranson was forced to leave in the third period with what is believed to be a wrist injury.

Is it bad this was my first thought as well?

6. Nilsson shuts it down

Trailing 4-1, the Penguins predictably came out flying in the third, and an early goal on the power play got them right back in the game.

The goal was an unlucky bounce, and Anders Nilsson made sure the Pens didn’t get another, despite the Canucks running into some penalty trouble.

His best in the third might’ve been this blocker save on Crosby.

He finished the game with 43 saves, and didn’t allow a goal at even strength.

We’re a quarter of a way through the season, and the unique goaltending situation of having no concrete starter is actually proving to be successful for the Canucks.

Both Nilsson and Markstrom been good when called upon, and everyone seems content to keep letting this situation play out.

If it ain’t broke, why fix it?

The Canucks are now 8-3-0 on the road this season, and off to a perfect 2-0 start to this six-game trip.

The next test is on Friday when the Canucks try and get revenge on Cory Schneider and the New Jersey Devils.