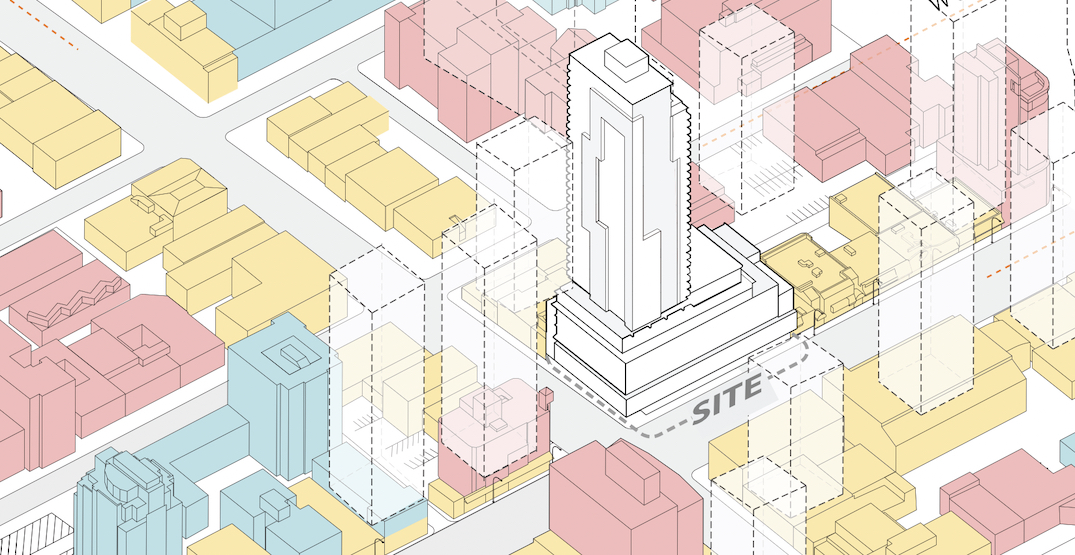 Some form of the Broadway Plan is expected to be approved this Wednesday, when Vancouver City Council completes its review and debate on 42 amendments to the plan proposed by city councillors and the mayor, and then votes on whether the amended plan as a whole should be approved.

In an earlier meeting date this month, the fifth meeting on the Broadway Plan within the span of three weeks, city council had enough time to go through and approve several of the major anticipated amendments.

Changes in potential number of towers

A major amendment by ABC councillor Sarah Kirby-Yung regulating the potential building form and development will enable up to three towers per block within areas closest to the five new subway stations of the SkyTrain Millennium Line extension along Broadway. This does not change city staff’s regulation in the plan for a limit of two towers per block in other areas of the Broadway Plan.

“It really responds to a lot of feedback that we have heard that was respecting the fact that it doesn’t put pressure for land assemblies by reducing the frontage from 150 ft to 99 ft. That could provide some more variation in the built form, and that’s something we heard from the public as well and also to alleviate some of the pressure on the older rental stock,” said Kirby-Yung.

By making it easier to achieve development sites, she says it could “potentially accelerate the delivery of some of the affordable housing types for the available sites because you’re not having to potentially assemble up to five lots. You’re not necessarily displacing, but you’re hopefully striking that balance on achieving some of the housing delivery.”

In response, city staff said they can support the 99 ft minimum frontage with the “appropriate urban design review,” but it would not mean every 99 ft frontage would be able to see a tower given requirements such as tower separation and setbacks.

Much of the Broadway Plan focuses on catalyzing new housing supply, but there have also been concerns on how it could unintentionally displace many existing renters who live in older properties in the area. To address this, Forward Together mayor Kennedy Stewart introduced an amendment to offer right-of-first refusal to existing tenants to return to a new rental unit at a 20% discount to city-wide average market rents by unit type or at the tenant’s current rent, whichever is less.

ABC councillor Rebecca Bligh put forward an amendment calling on the provincial government to prioritize and accelerate new funding to allow for the construction of expanded and new schools to serve 50,000 additional residents in the Broadway Plan area over the next three decades. City council approved this amendment.

Another amendment by Kirby-Yung on how community amenity contributions (CACs) could help support the needed park and green spaces and community facilities was approved unanimously.

Earlier in the meeting, Green Party councillor Michael Wiebe put forward an amendment to set specific targets for the creation of new park and green spaces — specifically one acre per 1,000 residents (equivalent to a minimum of 27 acres of new public parks by 2052), including the reallocation of at least 11% of neighbourhood streets, acquisition of new park land, transferring of city land to permanent park space, and in-kind park space through redevelopments. Furthermore, there would be a requirement of 1.2 sq ft of recreation space per resident, which is equivalent to 70,000 sq ft of new community centre space in the area plan.

But a majority of city council voted against Wiebe’s specific targets, as it would impact the financial viability of housing projects, especially with the Broadway Plan focusing on new affordable housing like rentals — unlike the Cambie Corridor Plan. Amending the Broadway Plan to provide a much higher degree of community benefits would generally require more condominiums as they produce the most CACs, instead of rentals.

“I don’t want to throw out the plan and miss the housing,” said Kirby-Yung, while noting that she agrees on the need to achieve more park space and recreational facilities. “I absolutely want us to be aspirational, but I also don’t want us to make significant promises that we can’t deliver. I’d rather that we over delivered and under promised… I don’t think we want to promise $1 billion worth of park space, but we absolutely want to shoot for better.”

Theresa O’Donnell, the chief planner for the city, sternly warned city council that this single amendment by Wiebe is not financially viable, and instead suggested that city council should only direct city staff to study it and report back, which was the direction ultimately approved. She also warned that the dozens of other amendments approved by city council also carry added costs that have yet to be tallied.

“This [parks] amendment adding almost $1 billion in a plan that is only producing $1 billion in the first 10 years could significantly change the public benefit strategy. It’s important to me, as your director of planning, to bring you a plan that I know we can pay for because like councillor Rebecca Bligh said, I’ve heard about the frustration with the West End Plan, East Fraser Lands Plan, Marpole Plan, and lots of plans that have promised things that we cannot deliver, so I was committed to bringing you a plan that I knew we could pay for,” said O’Donnell.

“If council were to accept the reality that we’re bringing forward something that we know is not possible, then I suppose this could go forward. But I would like to be fiscally responsible to this council and bring you a balanced plan.”