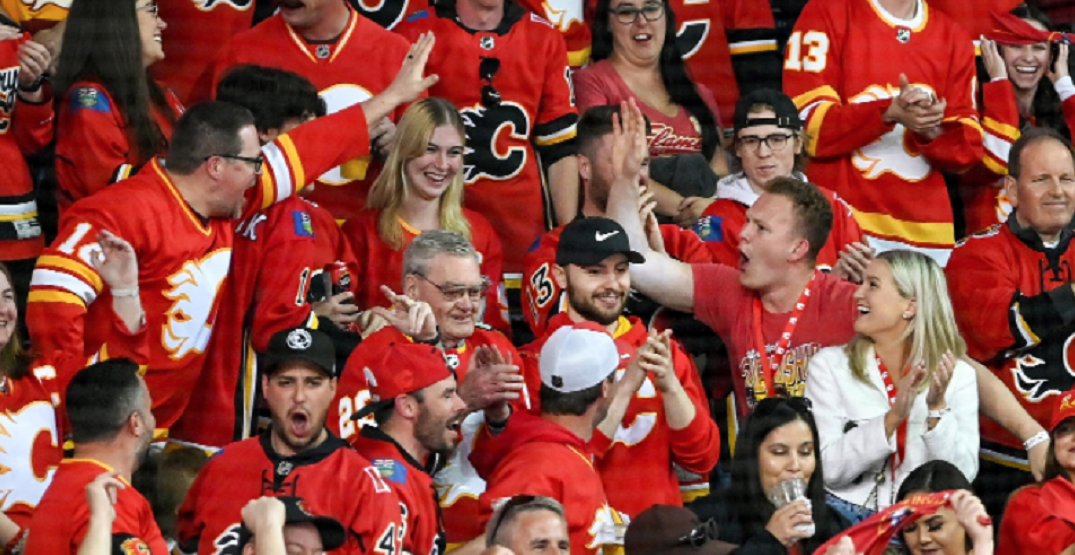 Nobody could ever accuse Brady Tkachuk of not having a good time.

With his own Ottawa Senators eliminated from playoff contention, nobody would fault the 22-year-old winger for not being too invested in this year’s Stanley Cup Playoffs.

But cheering on his older brother Matthew, the younger Tkachuk brother Brady was anywhere and everywhere during last night’s Game 7 victory for the Calgary Flames.

At one point, he was in the Red Lot tossing out t-shirts to the Flames’ faithful.

“He’s been on quite a tear since the season ended, so I can only imagine [how he’s celebrating],” Matthew joked with reporters postgame when asked about the t-shirt toss.

He was on the broadcast threatening to rip off his “Matthew Tkachuk Friendship Tour” T-shirt while singing along to Mr. Brightside.

"Maybe tarps off, you never know."

Brady Tkachuk is READY to sing Mr. Brightside in the crowd. 🎤 pic.twitter.com/xKzsZDX9qI

Next, he was mixed in with his family having a blast celebrating the Flames’ goals throughout the game.

When Johnny Gaudreau’s overtime winner went in, he was carrying a small child on his shoulders.

Tkachuk crew is completely fired up. Brady has a child on his shoulders. Lord have mercy pic.twitter.com/UjNndLWDIV

“Everyone’s seen all the videos of Brady recently, but he’s going to turn it up a notch tonight, I’ll tell ya that,” Matthew added in a postgame interview with Sportsnet.

Tkachuk then even ran into a couple of fans on the Red Mile in the postgame chaos.

The Tkachuk family earned the support of Flames teammate Milan Lucic earlier in the week.

“He’s just supporting his brother. I think Matthew would do the same thing for Brady,” Lucic said.

Game 1 for the Oilers/Flames series goes Wednesday night. We can only expect Brady to be dropping the ceremonial faceoff for that one while maybe parachuting onto the Saddledome roof to make a grand entrance. However he chooses to celebrate, you know we’ll be keeping a close eye on it.