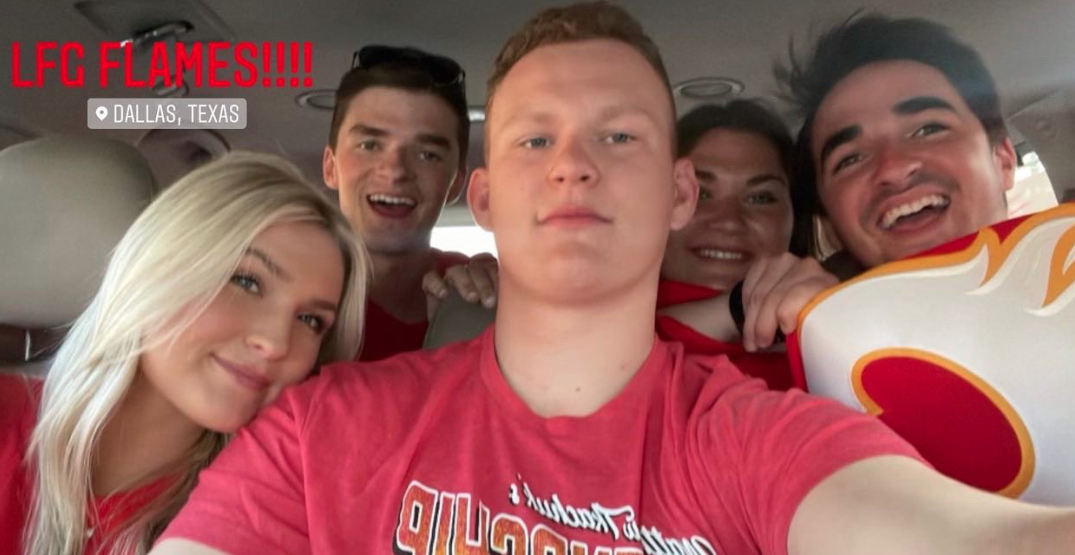 Seeing him cheering hard in the colour long after his Ottawa Senators ended their season is.

But Brady, along with friends and family, has been spotted in just red as he’s been cheering on his brother Matthew Tkachuk of the Calgary Flames in their opening-round Stanley Cup Playoffs series against the Dallas Stars.

The Tkachuk fam is ready for Game 4 🔥

And that’s no foul.

“I think when it’s blood it’s okay, especially since he’s wearing his brother’s shirt,” Flames forward Milan Lucic weighed in on Wednesday. “He’s just supporting his brother. I think Matthew would do the same thing for Brady.

“Being Matthew’s teammate, I’d have no problem with it.”

Brady Tkachuk openly cheering on the Flames is brave and hilarious. When the roles are reversed I expect to see Matthew rocking This Amelnykan Life merch at the CTC

The Senators finished seventh in the Atlantic Division this season, and nearly 30 points behind the Washington Capitals for the second wild card into the Stanley Cup Playoffs from the Eastern Conference.

Suffice to say, his season ended much earlier than Brady would’ve liked.

So now, he’s living vicariously through his brother.

And it’s not the first time the 22-year-old has done so, either.

Brady, who had an NHL career-high 30 goals and 67 points in 2021-22, did the same after his rookie season in Ottawa. With the Senators’ season wrapped three, Brady sported another shirt featuring his brother, dubbed on the front as “The Rat King.”

@TheoVon How dare Brady Tkachuk wear this shirt for his brother Matthew. We all know who the real "Rat King" is! pic.twitter.com/i2xJfp5CDc

The Flames were ousted in five games by the Colorado Avalanche that series.

Their fate against the Stars is already looking better, with the best-of-7 series tied 2-2.

Brady might’ve brought some luck. The Flames were trailing 2-1 in the series until he and the Tkachuk family hopped back into the spotlight for Game 4.

fascinated by brady tkachuk trying to get his dads attention pic.twitter.com/sI4StE3nnp

“It’s good to see him supporting his brother,” Lucic said. “I think it’s great. I mean, that brotherly love is really strong and they’re a really tight family. It was nice to see it.”

Fans, though, are understandably a little bit puzzled in seeing an NHLer opening cheer for what seems like another team.

Even knowing there’s some of that brotherly love involved.

It’s so weird that Brady Tkachuk is a Calgary Flames fan – slapping high fives after a Backlund goal. When was the last time you saw an active NHL player openly cheer for another team?

The real winner of the Calgary vs. Dallas series is Brady Tkachuk

the masculine urge to berate brady tkachuk for wearing his brothers' teams' merch.

it’s so funny that people are genuinely upset at Brady Tkachuk for wearing a Flames shirt. like … you know both of them are blues fans right?

Brady will have a few more chances to continue cheering.

The Flames take on the Stars on Wednesday in Game 5 in Calgary.

Game 6 is scheduled for Friday in Dallas and Game 7, if necessary, will return to the Saddledome.