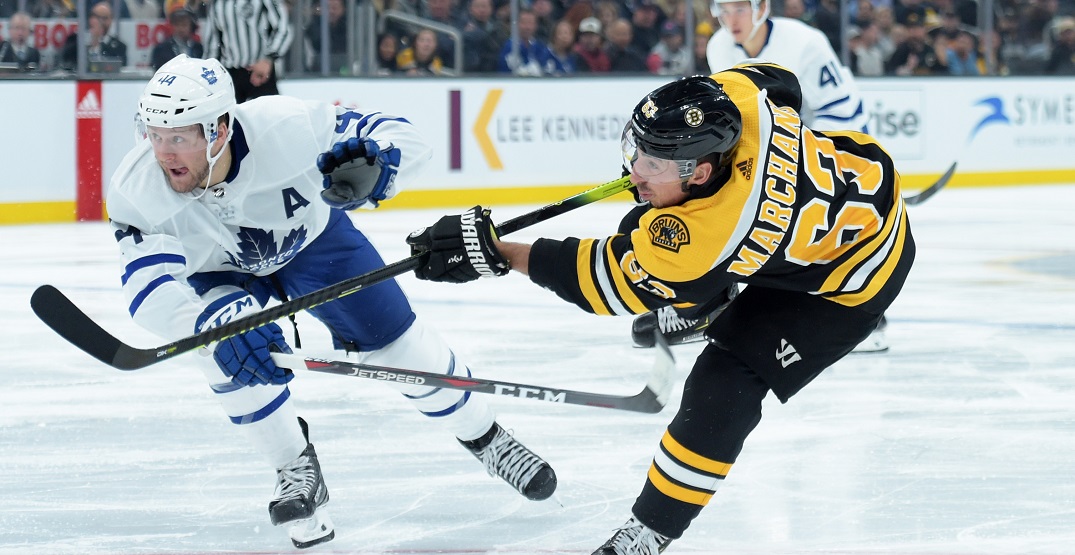 Boston Bruins forward Brad Marchand might be the biggest enemy of the Toronto Maple Leafs over the last decade.

But it hasn’t always been that way.

Marchand, a native of Halifax, Nova Scotia, has spent the entirety of his pro career with the Bruins organization since being drafted by them in the third round back in 2006.

Throughout his time in Boston, Marchand saw his Bruins team defeat Toronto in three first-round playoff series — with the Bruins winning three separate Game 7s over the Leafs in 2013, 2018, and 2019.

Asked if he took any liking to the Canadiens as a youngster after scoring a hat trick in a 5-1 rout over Montreal on Wednesday night, Marchand actually admitted to reporters that he cheered for the Leafs growing up.

“I was always a Toronto fan growing up,” Marchand said. “As painful as that is to say now. Once I thought the NHL could be a reality… Montreal really didn’t show any interest (in me at the draft), so it wasn’t a team I thought would pick me. Luckily I ended up here (in Boston), and it’s been a lot of fun.”

As of right now, a fourth Leafs-Bruins series for Marchand isn’t in the cards. Toronto sits third in the Atlantic Division, four points behind both Florida and Tampa Bay, while Boston sits a further seven points behind the Leafs.

But with over half the season left to play, it might be a little bit too early to predict playoff matchups just yet.

Marchand won’t get a chance to play against his childhood team for a while, though. The Leafs and Bruins aren’t scheduled to play each other next until March 29.